Whistling Kites are fine, what’s all the fuss about?

Black and Brahminy Kites aren’t my favourites though.

I probably owe the participants in this week’s catch a few more words than last week.

I am rarely confident of catching when we set on Wader Beach as it is impossible to camouflage the net well.

However on bigger tides when the net is up amongst a few old tide lines it can be hidden reasonably effectively. As was the case this catch. The other reason I was confident was that a flock of 8,000 birds had been using Wader Beach everyday for a week or more and when an eagle, a kite, a helicopter, an over-keen photographer or scanner disturbed them they just kept coming back to Wader Beach each and every time.

So much to the joy of the early net setting team, Wader Beach it was.

The net and cage set was the easiest in 21 years of my work here (brilliant team?) Well partly but also some soft sand that we could actually get the cages in to. It wasn’t in the place we usually set so it was a long walk with the cages but worth it not to upset that early morning team to much.

I didn’t expect we would need much twinkling and with just 1 push from Emilia and some natural arrivals we had a very big flock in front of the net.

But what I wasn’t expecting was the number of Black-tailed Godwit present on the beach, they hadn’t been there on the 2 previous days in anywhere near the numbers on catch day. Perfectly feasible some of them had arrived last night.

So now I had a problem, albeit a good problem.

I could easily have fired the net over a very good catch of stints and sand plovers but who in their right mind turns down a possible catch of 50 Black-tails?

So we waited until they were close enough to catch which by then meant we had a very large catch in total. But cool conditions and with the tide nowhere near the net it was safe to take a big catch.
And that is exactly what we got! The numbers in the table are the birds we processed it doesn’t include the 250 or so we let go!

It was undeniable hectic at the net but we got birds in to boxes and to the cages and let birds go at the net, despite the constant attention of a Black Kite.

53 Black-tails were processed 50 new colourband combinations put on. Of the 4 retrap Black-tails one was 19+ it it’s nineteenth year of life or older and one was age 12 in its twelfth year of life. And we topped up very nicely on Red Knot and Curlew Sandpipers for the dry season, a very satisfying catch.

We also re-trapped a Great Knot carrying a satellite transmitter but it wasn’t particularly exciting as the bird had stayed in Roebuck Bay [EAAF111] since getting the tag in 29/09/2016 and we had caught it once in Feb 17 and one in July 17. It obviously enjoys our company or doesn’t notice nets too well. The bird was very strong and the 2nd heaviest of the 11 re-trapped colourbanded Great Knot. 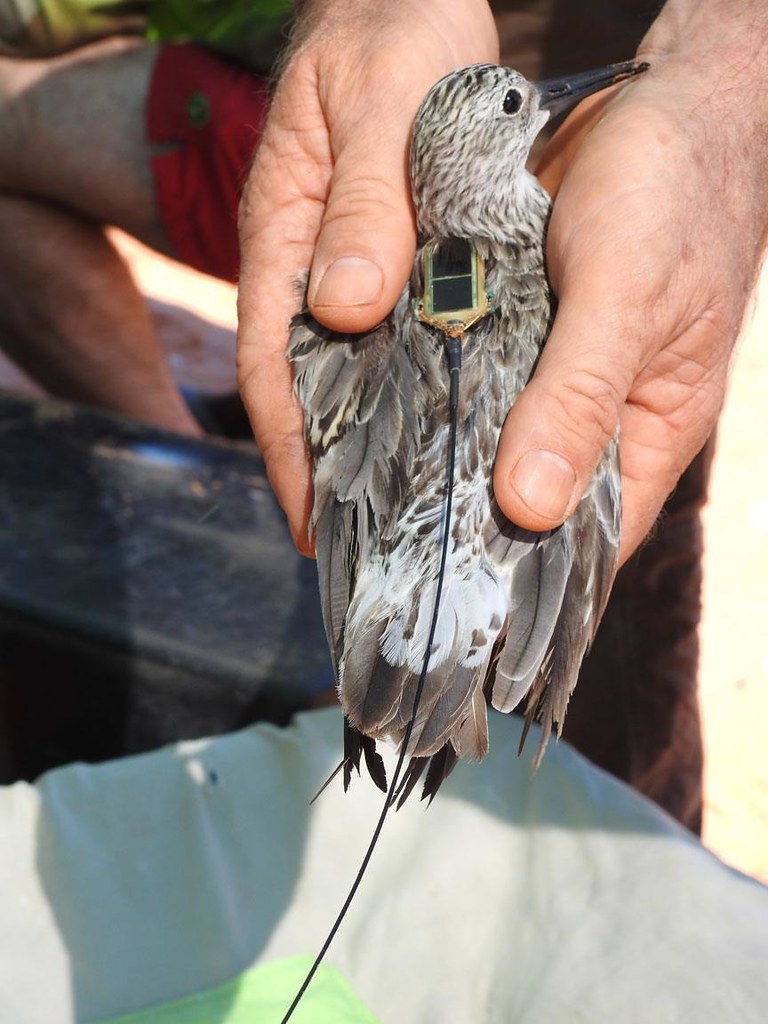 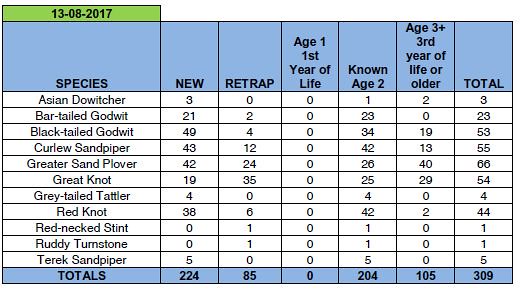