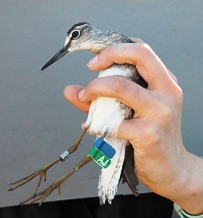 Mongolia is strategically located on the inland route for shorebirds migrating between non-breeding grounds in Australia and southern Asia and breeding areas in Asian tundra, taiga and steppe regions. However, knowledge of the shorebird populations that use this route, the numbers involved, key dates and important sites is sparse. Furthermore, in-country capacity and resources to undertake research and conservation projects are limited. Recently, a collaborative project was initiated to address these needs and ultimately assist Mongolia in managing shorebird populations and habitats throughout its jurisdiction. Proposed by Wetlands International on behalf of the National University of Mongolia and with endorsement of the Ministry of Nature, Environment and Tourism, the project meets five Key Result Areas of the EAAFP Implementation Strategy 2012-16. Drawing on contributions from the Ministry of Environment Korea, the EAAFP Secretariat allocated a small grant to facilitate the first phase of the project.

During 10-15 August 2012, a team of five trainers from among the EAAFP Partners (three from Australia/AWSG and two from South Korea) conducted a workshop in Ulaanbaatar and a short expedition to Dashinchilen Tsagaan wetlands, central Mongolia. With excellent logistical support from the Mongolian Ornithological Society and led by Dr Sundev Gombobaatar, seven trainees(mostly postgrad students) received desk and field training on migratory shorebirds – their ecology, threats to survival, counting methods and techniques for trapping, marking and recording biometric data. Twenty mist nets were deployed in shallow lakeshore and marsh habitats at Dashinchilen Tsagaan. A start-up set of engraved leg flags was presented to the Mongolian team: the protocol for Mongolia is blue over green. A small sample of 24 shorebirds comprising 10 species was trapped, leg-flagged and fully processed – an ideal scenario for training, with supervised students handling birds as diverse as snipe, sandpipers and stints. Plumage features revealed that most birds were juveniles. More than half of the flagged birds were of species that regularly reach Australia, such as Wood Sandpiper.

Counting revealed over 12,000 waterbirds (57 species including 33 shorebird species) in this wetland system with high numbers of Spotted Redshank (2500, well over the 1% threshold), Black-tailed Godwit, Pacific Golden Plover and Pied Avocet. Several species mainly associated with coastal habitats, such as turnstones and phalaropes, were present in small numbers. This IBA-listed site also supports breeding by globally threatened White-naped Crane and Swan Goose. Whereas it seems certain that some of the shorebirds at Dashinchilen Tsagaan (e.g. Little Curlew) will migrate to Australasia, it is not yet clear as to which shorebirds will use the EAA Flyway and which will use the Central Asian Flyway, in the non-breeding period. As more shorebirds are leg-flagged and then re-sighted farther south, the answers may emerge. Subject to securing funds, a follow-up training expedition to this site is proposed for the northward migration and breeding period in May 2013 and anexpedition to eastern Mongolia is also being considered.