Let us share with you the submissions from the students and teachers who participated in the Black-faced Spoonbill Youth Conservation Activity, which was held in Incheon, Republic of Korea, last year. These are based on their continuous monitoring activities.

The Story of K94, ‘Gusailsaeng’

A Black-faced Spoonbill with the ring K94 tells us a special story to the people monitoring birds at Namdong Reservoir, Incheon. 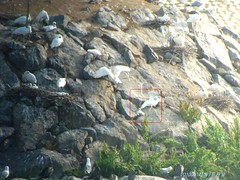 The young Black-faced Spoonbill being attacked

‘How come this baby bird left its nest?’ wondered the teacher when a Herring Gull flew in and started pecking the baby. An adult spoonbill flew in to join the Herring Gull and they started to threaten him. When the herring gull started to attack again, the helpless baby fell to the lower part of the rocky island.

However, the presumably dead baby bird, somehow found strength to get back up and started to clamber up the rocks step by step.

When it slipped, he climbed again. The bird walked with faltering steps struggling to balance on its yet small wings. Finally, after thirty minutes, the young bird managed to return to his nest where it reunited with his parents and siblings.

Everyone who heard this story applauded with excitement praying for the young bird’s future.

That year, we were ringing birds and the young bird got a ring with the number 94. People thought it was destiny and they gave him the nickname ‘Gusailsaeng (K94),’ which means ‘a narrow escape’ in Korean.

Was it thanks to the name?

In 2013, K94 returned to his hometown, Namdong Reservoir, in a good shape. In 2014, he tried to breed but failed as his nest was flooded.

Will K94 become a father when he returns to Namdong Reservoir this year?

K94, ‘Gusailsaeng,’ found a place at the bottom of the island for breeding but failed. However, he had the eggs at the same place and incubated them. While raising the babies, he luckily didn’t rain so the nest wasn’t flooded. Thanks to the drought, he raised two babies successfully.

I hope K94 settles on the upper part of the island next year, but I can’t know what his plans are.

A colour band has one longer ring closed around the bird’s leg that has a combination of letters and digits. For the other leg, a smaller ring of a different colour is attached. Each country has a different colour code for their longer ring. Red is used by Korea, blue is for Taiwan, yellow for Japan and Hong Kong uses green. The letter represents the country K – Korea, J – Japan, T – Taiwan, and A – Hong Kong. The colours of the rings show the birth year of the spoonbill, the location of its wintering ground, and its migratory route.

Among the spoonbills with rings, the oldest one that breeds at Namdong Reservoir is called ‘Chungchung.’ It has two short blue rings attached to its left leg. The long ring was red, but it got lost. It could have been damaged or came off because it is made of plastic.

Chungchung looking after two babies in 2010

Chungchung with three babies in 2014

Visiting Namdong Reservoir since 2009, it has been seen attempting to breed every year since 2010. It is a hard-working male that makes his nest with lots of love, incubates his eggs, and raises his babies every year.

I wonder when it will come again and how long it will be able to raise babies for. I wish Chungchung a long healthy life with many babies.

Migratory route of E37 across the west coast of Korean peninsula, China and Taiwan

I was born in Gakssiam in Ganghwa in 2011

One day, people came to our island

But I was caught by them

People put a tracker on my back

It was heavy and uncomfortable at first

I wanted to take it off

Now I am used to it like it is part of my body. 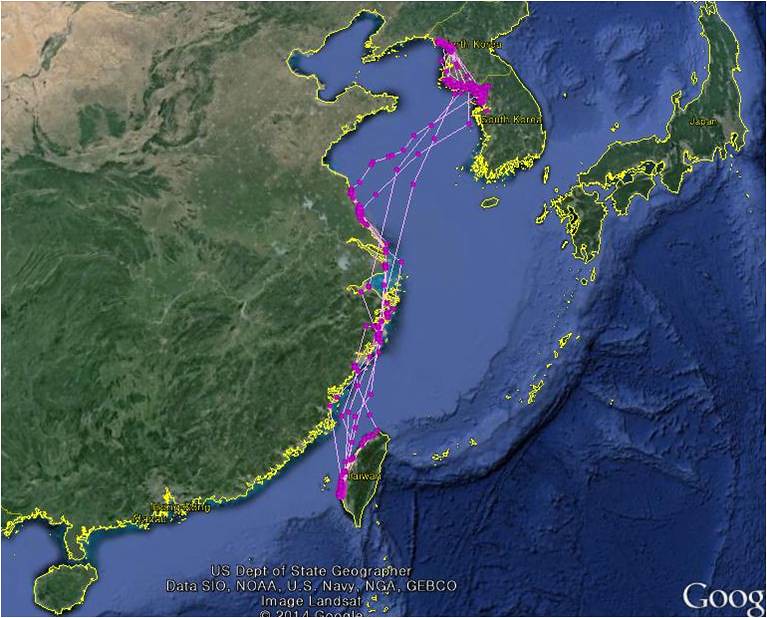 The travel route in 2014: from North Korea to Namdong Reservoir

I was born in Gakssiam

Is there any food in the south?

Are there any places to live in the north?

l went around up and down along the west coast.

There is no food in winter

I went down to the south

Crossing the west coast of Korean peninsula and going south along the Chinese coast, I spent the winter in the south of Taiwan’s west coast in mud flats and fish farms

In 2014, I flew around Ongjin peninsula, Dongducheon, Han river in the north to find food and a breeding place

I heard rumours about a large heard of black-faced spoonbills

I came to Namdong reservoir.

As they say, there live many black-faced spoonbills

Now I need to settle here

I worry if I will be able to lay eggs and take good care of my babies among many other black-faced spoonbills. Please keep your fingers crossed for me.

Black-faced Spoonbill parents would normally make a nest with branches or grass and put feathers or soft grass under the eggs. However, many spoonbills use plastic bags that are easy to found at the reservoir.

In 2011, we found a 15-day-old spoonbill stuck in the nest made of green plastic strings. It couldn’t move with the feet tangled in plastic strings. Researchers who went to the artificial island rescued this bird.

We brought it immediately to the animal hospital. When we untangled the plastic strings, the toe looked infected. Although the spoonbill was limping, we decided to let it go back to the island hoping that it would overcome the pain and we hoped the bird could walk again.

We also attached a yellow ring to the other leg. This allows us to monitor whether the bird stays healthy. We call it ‘Norangi’ since then.

Norangi has grown well. It came to the place where we were monitoring and let us know it was okay. We saw it fly to the Sihwa Lake and feed alongside its parents.

Plastic bags, strings, fishing lines, and nets which we thoughtlessly throw out can take birds’ lives. I hope this story inspires you to reflect on our careless actions that may have caused harm to wildlife. Now, Norangi in a grown-up and comes to Namdong Reservoir every spring after wintering in Hong Kong. In 2015 she built a nest, laid and incubated eggs. However, she failed to be a mother because of a flash flood. Let’s hope that Norangi has pretty babies next year.