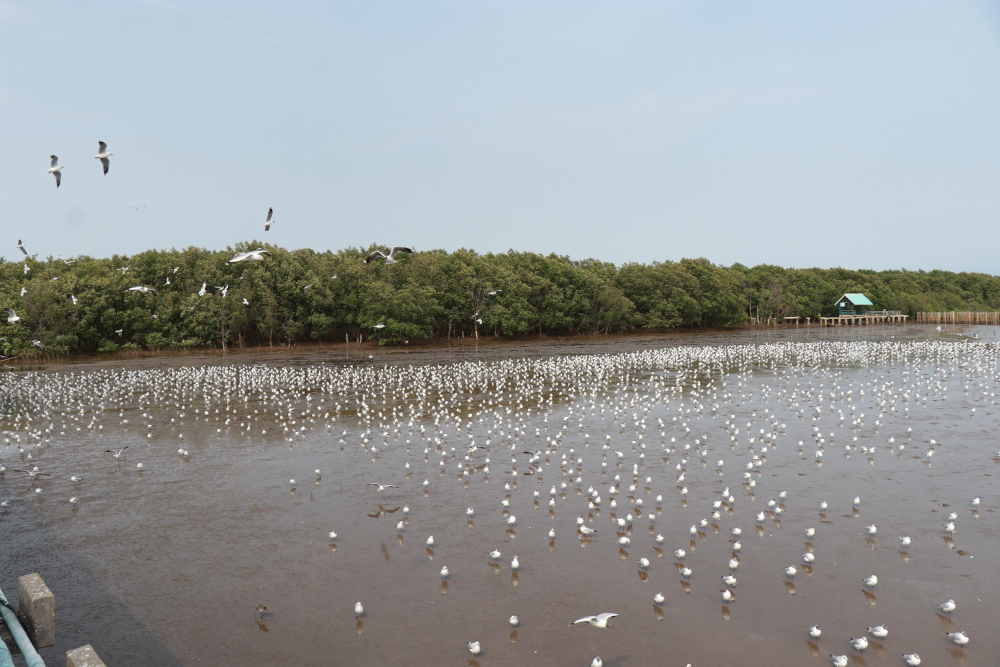 Bangpu Nature Education Center is a coastal and estuarine mangrove area in the northeastern part of the Inner Gulf of Thailand or Bangkok Bight. The site’s intertidal mudflats contain nutrients essential for mangroves and small animal species living in the mangroves, as well as resident and migratory birds. The site harbours 65 floras and 60 benthic faunas. Between 8,000 and 15,000 birds are estimated to use the site annually, the majority feeding on the highly productive intertidal mudflats.

Up to 80 species of resident birds and over 160 species of migratory waterbirds have been recorded at the site, including two IUCN-listed near threatened species regularly occur in significant numbers: Black-tailed Godwit (Limosa limosa), and Painted Stork (Mycteria leucocephala). Furthermore, at least three waterbird species occur at the site in concentrations higher than 1% of the biogeographic populations: Browned-headed Gull, Painted Stork and Black-tailed Godwit, underlining the site’s international importance. The site is within the 190 kilometre-long section of the coastal zone of the Inner Gulf of Thailand, defined as an Important Bird and Biodiversity Area (IBA) by Birdlife International and one of the most important sites for migratory waterbirds in mainland Southeast Asia. The site is managed by the Quartermaster Department of the Royal Thai Army, which has the legal tenure of the land.

An area in the east of the Site is used as a Nature Education Center for pre-arranged student visits and casual weekend visitors and is managed by FEED. There are bird observation hides, mangrove treetops observation tower, canopy walkway, mangrove boardwalk, and nature trails in the area used for educating students and visitors on biodiversity and mangrove ecosystems, benthic species, and birds. Around 20,000-30,000 individuals visit and benefit from the Nature Education Center each year. Besides, the Site supports Corporate Social Responsibility (CSR) activities such as planting mangrove seedlings in the mudflats, and helps raise public awareness for nature conservation among visitors participating in the activities.

With the kind support from the East Asian Australasian Flyway Initiative, ONEP will organize activities for the World Migratory Bird Day (WMBD) 2022 in order to discuss needs and niches for the development and implementation of migratory birds plan and action. The development of provincial and national migratory birds Plan and Activities that conforms with the Post 2020 BD Strategic Plan and NBSAPs.

This event will include birdwatchers both professional and amateur, site managers researchers and conservationists, business entities, NGOs and Local Administration Officials, and representatives from governmental organizations.

The Department of National Parks Wildlife and Plant Conservation, Bird Conservation Society of Thailand (BCST) will contribute information on globally threatened birds relevant to assessing their threat status and conservation. Help assess populations or range sizes and trends of a species, the threats impacting it, or taxonomic changes.

Conservation of Endemic species in Thailand.

The rapid expansion of the geographic extent of cities and towns tends to increase the population in the cities in response to the expansion of the economy. This causes more human settlement in the cities and is responsible for the increasing land utilization, decreasing of space in the cities, and also decreasing in agricultural areas and green spaces. Actions should be executed in areas of taking stock of biodiversity, studying of threatened species, endangered species, and endemic species, and also its habitats, green spaces, agricultural areas, wetlands. Moreover, database designing, school networking and collaboration, and awareness-raising should not be overlooked.

ONEP envision the importance of sustainable conservation and utilization of biodiversity in the cities and capacity building of communities by promoting programs that encourage communities to live in harmony alongside biodiversity, thereby launching a project with a pilot area to secure the natural and environmental based best practice.  What’s more, the project suggests strengthening knowledge of biodiversity to the people in all walks of life, and also building networks with people. The project aims to analyze the approach of communities of the pilot areas that have conservation measures on protected and vulnerable areas or on habitat of threatened, endangered, or endemic species in order to conserve and restore biodiversity in local areas effectively. Alexandrine Parakeet (Psittacula eupatria), endemic to the area, is the species selected for the pilot area and is studied for the best practice in the conservation of endemic birds.