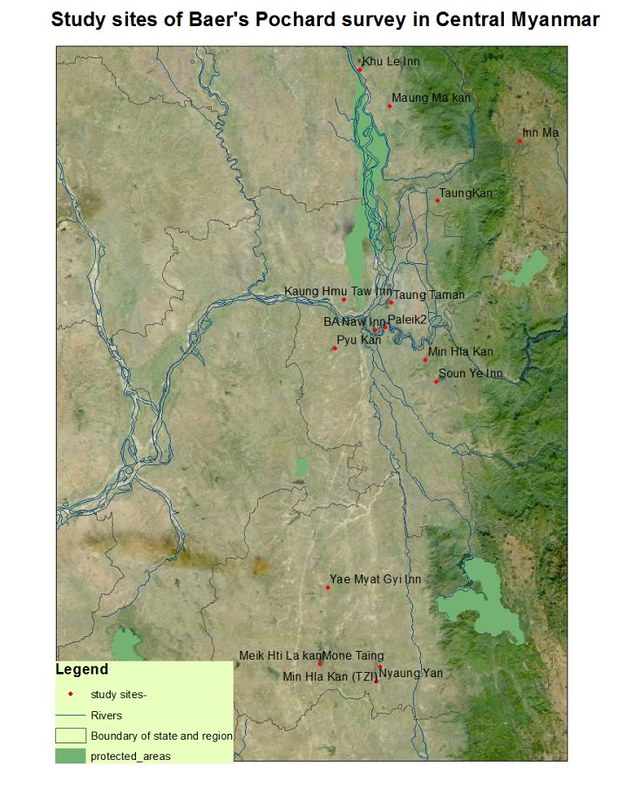 Before conducting comprehensive survey, brochure and leaflet about information of Baer’s Pochard were distributed to BANCA’s members, birding photographer, birding tour guide, international and national conservation organisation. And it was also distributed to the irrigation department of our study area and communities who are living around our study area.

The feedback were collected and prepared the coming field survey route and wetland area in central Myanmar. According to the information of Baer’s Pochard finding in Inle lake, our survey team conducted three days survey in Inle lake. But only Ferruginous Pochard were recorded in this area. 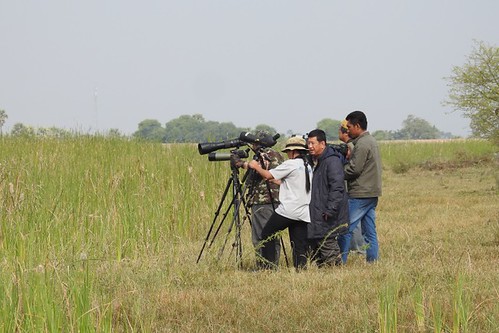 Point count method and direct observation technique were used to count the population of waterbird species. Information from local guides was collected to assist with locating and accessing sites. Quite often such sites could be easily covered with a pair of binoculars. A telescope is required for counting flocks at distance, and/ or sites that support large numbers and many species. Hiring a boat was sometimes needed, as in the case of Taung Kan Sedaw gyi and Maung Ma Kan. Threats on migratory waterbird species were recorded. The precise geographic coordinates for each location and the parts of it were recorded using GPS. Baer’s Pochard and other waterbirds observed were also recorded, and all observations of Baer’s Pochard recorded details such as their sex and behavioural observations of their diurnal activities: foraging, resting, preening and swimming. Human activities, threats and impacts, and environmental parameters (including water depth and vegetation types) were also noted.

Over 5000 individual of 41 waterbird species were observed and at least 12 individual of Baer’s Pochard were found in Pyu Kan near Mandalay city. The lake is probably natural and is used for irrigation. Pyu Kan is located above 98 m sea level, beside the village of Pyu kan in the south western part of Tada U Township, Mandalay Region. The area of water body is 1897 ha in rainy season and 291 ha in dry season. The lake was probably natural and is used for irrigation. There were small trees around the lake. The lake is close to Tada U Township, and surrounding area is semi-urban. 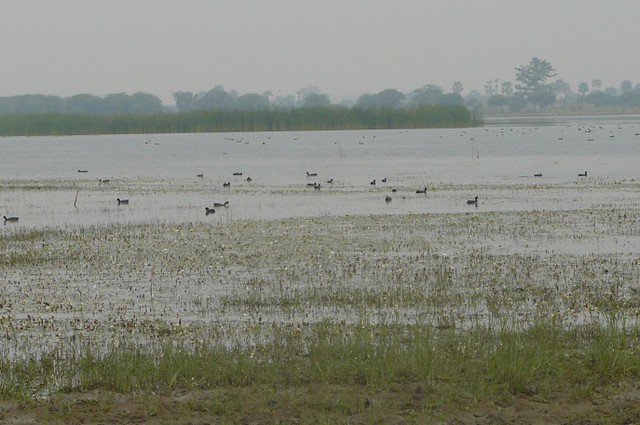 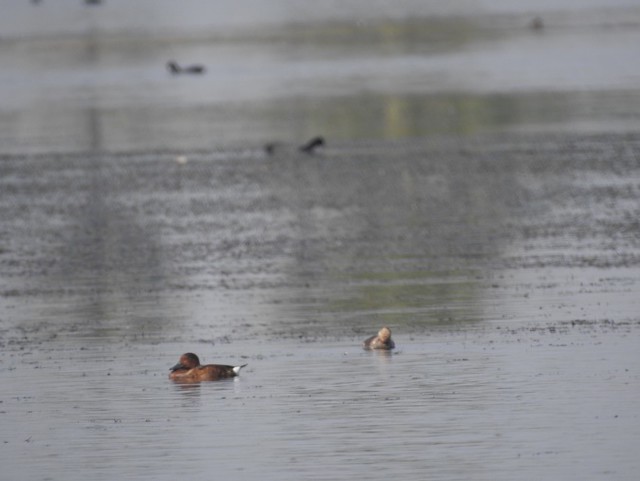 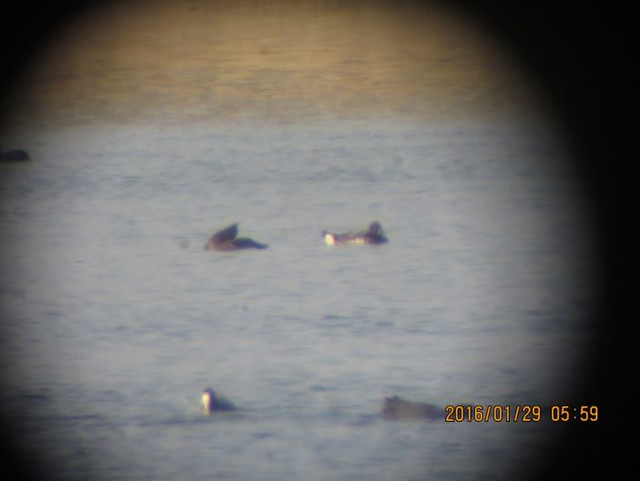 The lake is one of the important wetlands in central Myanmar. It is an important ecosystem for both migratory and resident waterbird species as well as benefits to the local people such as food, regular water supplies and protect from extreme weather.

The wetland provides bird watching opportunities especially for migratory waterbirds. Also, people can enjoy the idyllic landscape and recently, national and international tourists have increased. Well managed ecotourism can provide benefits not only for tourist, but also for local people as an income source.

There is no potential threat on Pyu Kan. Fishing and washing on the bank of Pyu Kan which cause contamination of the water can affect human health and existing biologically diverse plants and animal species (fish and bird). Pyu Kan is important to conserve because it is not only freshwater which support all living thing but also the habitat support to the animals. 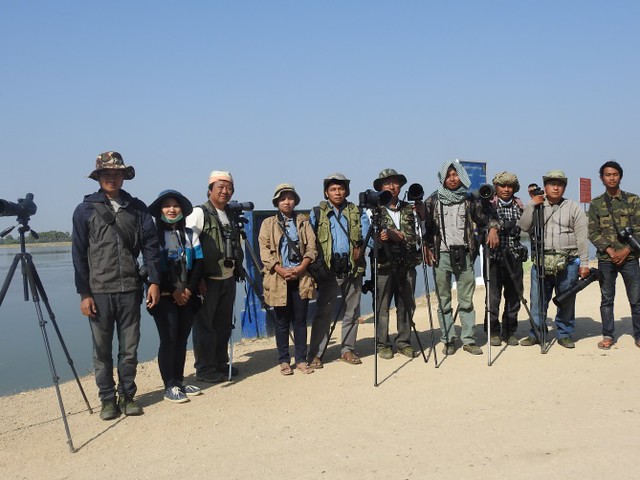 Not only Pyu Lake but also Paleik is very important sites for diving waterbirds in central Myanmar. We got extra fund for Baer’s Pochard survey from Oriental Bird Club (OBC) for March survey. And also local organisation which Wild Winged Photography are interested to coordinate on the study of Baer’s Pochard. Total of 8 study sites such as Pyu Kan, Paleik, Banaw (Lat Toun Inn), Taung Taman, Inle’ Lake (western part), Inle’Lake (Eastern part), San Kar Lake and lakes and forest between Kalaw and Inle Lake. At least 4 Baer’s Pochard and total of 31 waterbird species were recorded in Pyu Kan on 3 March 2016. 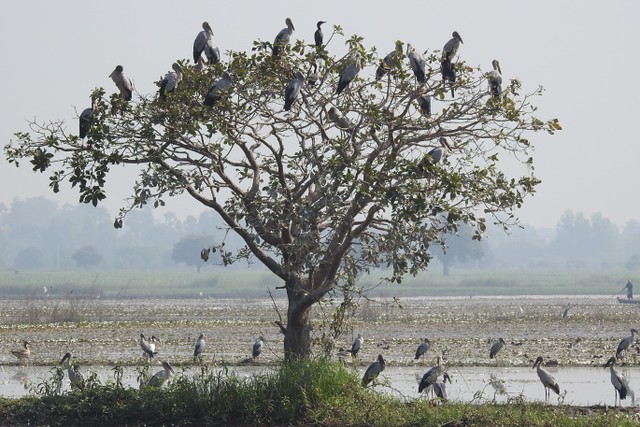 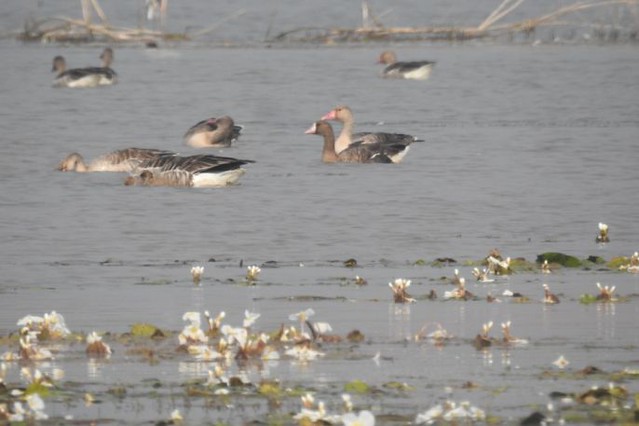 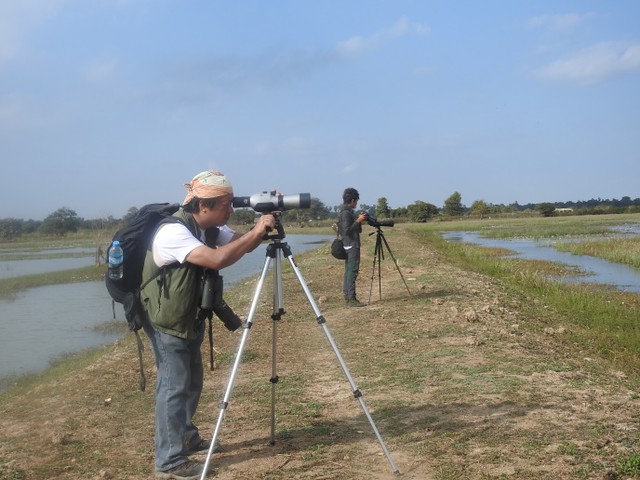 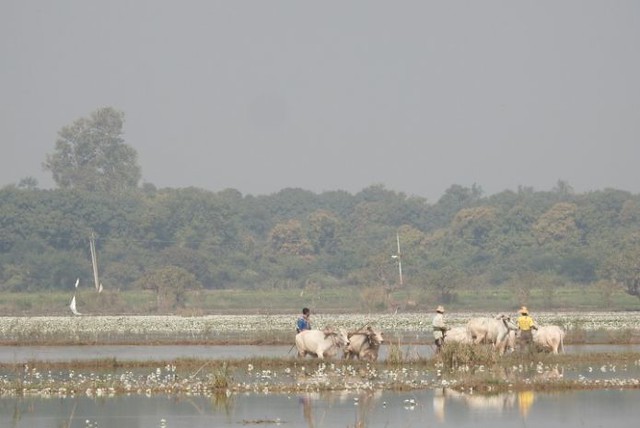