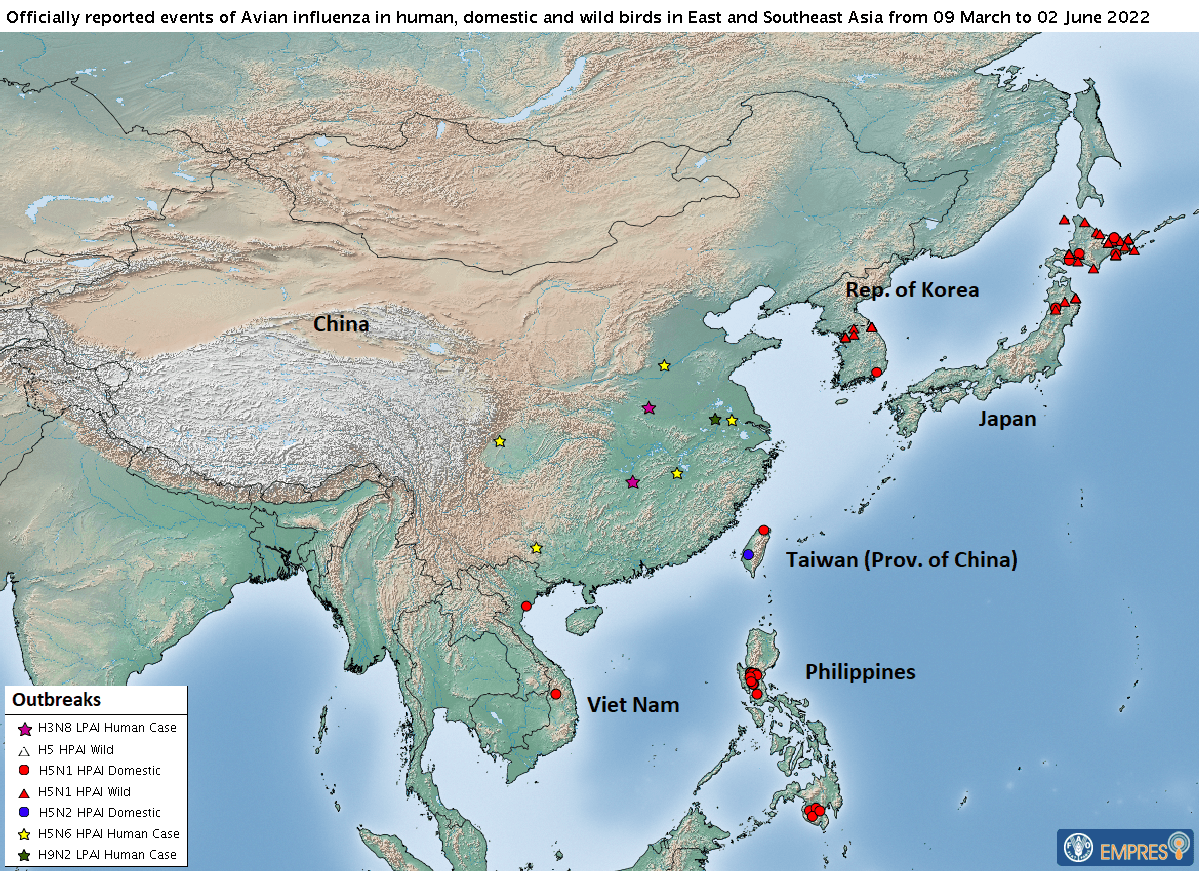 FAO/EMPRES-AH is constantly monitoring the avian influenza situation worldwide and compiles information from multiple national and international sources as well as peer-reviewed scientific articles. Close collaboration with country and regional offices, the implementation of avian influenza field surveillance projects, and networks of expertise like OIE/FAO’s OFFLU (www.offlu.org) provide access to timely information on outbreaks, surveillance findings, and genetic similarities of circulating viruses or their virologic features. This information is stored in the EMPRES Global Animal Disease Information System (EMPRES-i), a database that can be accessed online at https://empres-i.apps.fao.org/.

During the period 09 March to 02 June 2022, three highly pathogenic avian influenza (HPAI) virus subtypes (H5N1, H5N2, and H5N6) and two low pathogenic avian influenza (LPAI) virus subtype (H3N8, and H9N2) have been reported in East and South-East Asia. H5Nx HPAI viruses continue to circulate in Southeast and Eat Asia and are established in certain areas of the region. Viet Nam officially reported only two HPAI outbreaks in domestic birds in Ninh Binh and Kon Tum provinces, which reflects a decrease in the number of reports as compared to the previous reporting period. In Japan, seven H5N1 HPAI poultry outbreaks were observed in Akita (2) and Hokkaido (5) prefectures, and one outbreak occurred in captive ostriches and emus in a zoo of Iwate Prefecture. In addition, Japan reported 40 H5N1 HPAI detections in wild birds, and in two wild mammals including a Fox (Vulpes sp.) and a Japanese Racoon Dog (Nyctereutes viverrinus).

In the Republic of Korea, only one H5N1 HPAI outbreak was reported in domestic chickens and 13 wild bird cases were reported in Kangwon (9) and Kyonggi (4) provinces. H5N1 HPAI is still circulating in the Philippines and caused 19 poultry outbreaks in Central Luzon (14), Calabarzon (1), Davao (1), Soccsksargen (2), and in the Autonomous Region in Muslim Mindanao (1), affecting 1229 out of 25 589 ducks, common quails, and other unspecified domestic birds. Taiwan Province, China reported one H5N1 HPAI outbreak in backyard poultry and one H5N2 HPAI outbreak in domestic turkeys.

Furthermore, China reported five A(H5N6) human infections in Henan (1), Jiangsu (1), Jiangxi (1), Sichuan (1) provinces, and in Guangxi Autonomous Region (1). Amongst these five cases, three showed severe symptoms, one was in critical conditions, and one had died at the time of reporting. Since 2014, there have been 79 A(H5N6) human infections reported globally and 78 of them occurred in Mainland China, the latest case being reported on 18 May 2022. In addition, one human infection caused by A(H9N2) was reported in a young child in Anhui Province, China. Importantly, two human infections caused by influenza A(H3N8) were reported in Henan and Hunan provinces, China. This is the first time an H3N8 virus subtype demonstrates zoonotic potential. The Tripartite organisations (FAO, WHO, and WOAH) in collaboration with the OFFLU network of expertise on animal influenzas have conducted a preliminary joint rapid risk assessment addressing influenza A(H3N8) events, available at this link.

We consider avian influenza activity to be lower in the period from March to June, therefore reports of outbreaks in poultry or detections in wild birds and humans are expected to decrease over the coming months in the region. 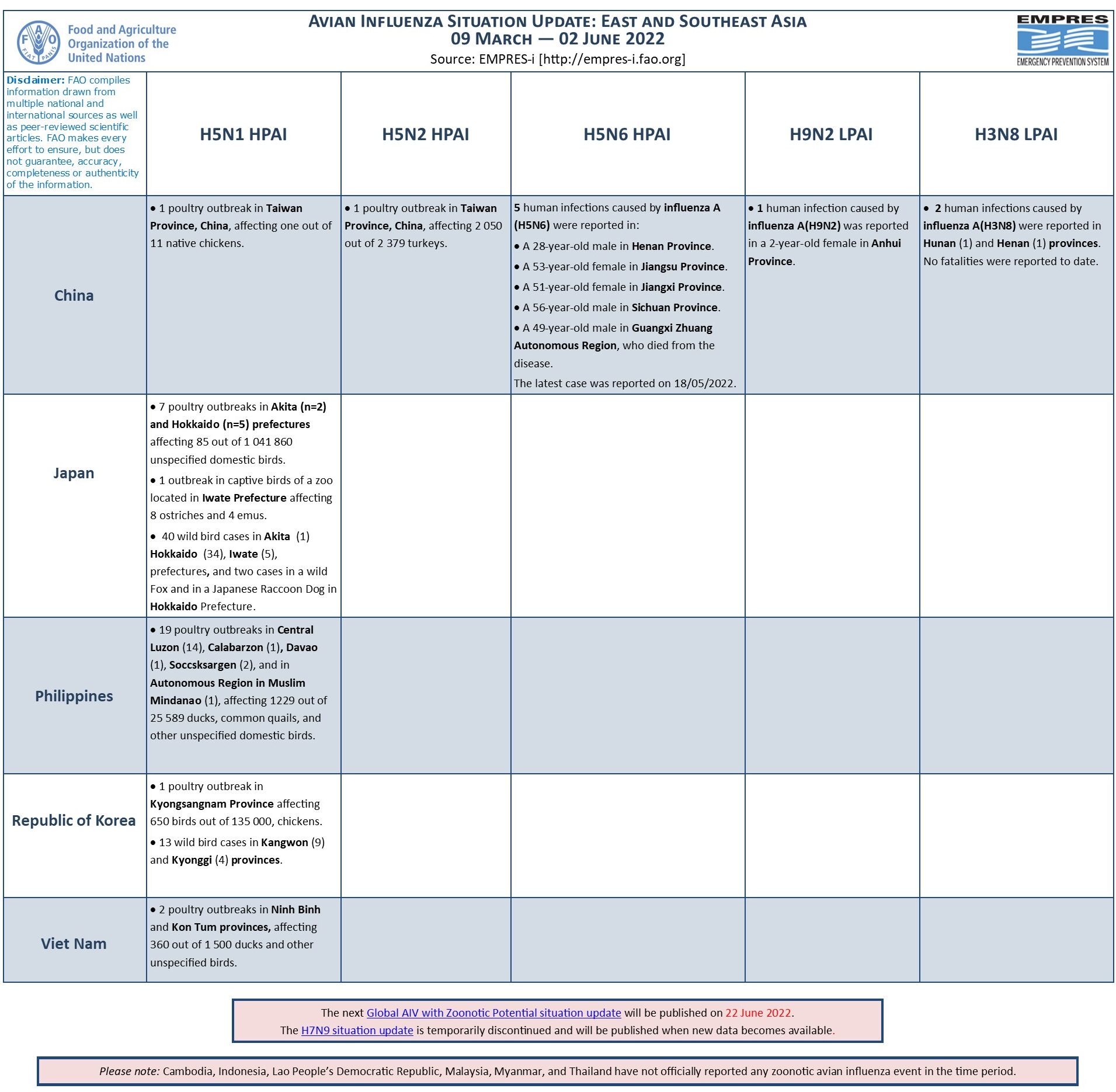