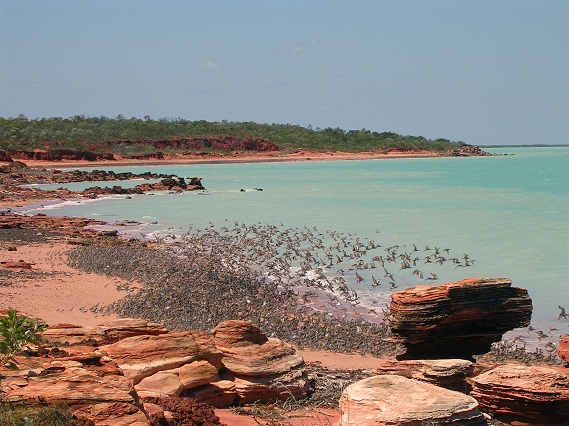 Eighty-Mile Beach and Roebuck Bay are among the most important non-breeding and migratory stop-over areas for the hundreds of thousands of migratory shorebirds in the East Asian-Australasian Flyway. The sites are home to more than 300 species of birds including 50 species of shorebirds. For some species of migratory shorebird, the highest concentrations have been found at these sites. Both sites were designated as new additions to the Flyway Site Network (FSN) on 4 March 2013, bringing the total number of Australian sites to 19.

Eighty-Mile Beach is located in remote north-west Western Australia. This site is over 175,000 hectares and it consists of a 220-km section of coastline and adjacent mudflats, as well as inland marshland with two large ephemeral lakes and a series of springs. Eighty-Mile Beach is a designated Ramsar wetland as well as a Western Australia “Class A” Marine Park, listed in January 2013. 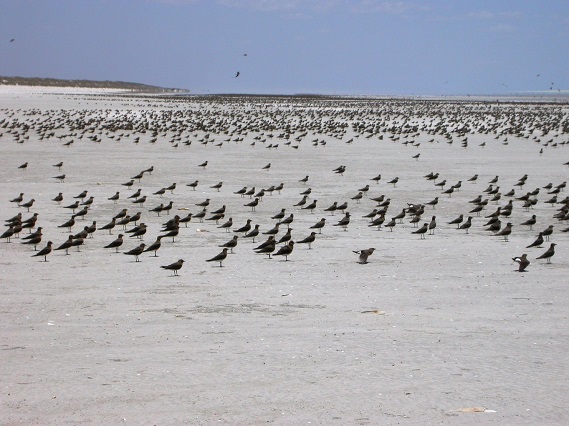 The record of over 2.8 million Oriental Pratincoles by the NW Australia Wader and Tern Expedition in 2004 was extraordinary, as it vastly exceeds the previous estimated population in the whole East Asian – Australasian Flyway of just 75,000. Oriental Pratincoles are nomadic during the non-breeding season, moving around in response to the availability of food which is largely determined by rainfall. Therefore, it is likely that a combination of unusual weather and feeding conditions led to this concentration and that the population has always been much more numerous than previously supposed, with most occurring unrecorded in the vastness of remote and little-visited outback Australia. 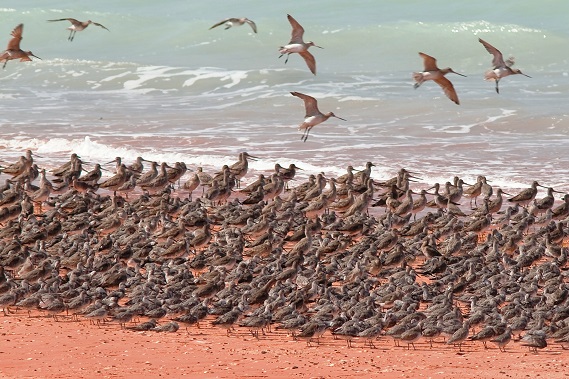 The second site, Roebuck Bay covering an area of 34,119 ha, is considered to be the arrival and departure point for large proportions of the Australian populations of several migratory shorebird species, for instance the Bar-tailed Godwit Limosa lapponica. This species is believed to fly non-stop between continental East Asia and Australia. Roebuck Bay is also a rich feeding ground for other shorebird species, supporting an exceptionally high micro-invertebrate biomass, including many species yet to be formally described (G. Pearson, pers. comm.).

With extensive, highly biologically diverse intertidal mudflats, Roebuck Bay regularly supports over 100,000 migratory waterbirds. The highest number of shorebirds counted at the site was 170,900 in October 1983 and a total of over 88,000 shorebirds were counted at the site during the austral summer of 2009-2010. The site supports globally significant numbers of at least 18 migratory shorebird species, all of which occur in numbers well in excess of 1% of the flyway population; Black-tailed Godwit Limosa limosa, Bar-tailed Godwit, Common Greenshank, Terek Sandpiper, Grey-tailed Tattler, Ruddy Turnstone, Great Knot, Red Knot, Sanderling , Red-necked Stint, Curlew Sandpiper, Greater Sand Plover, Oriental Plover, Grey Plover, Eastern Curlew, Whimbrel Numenius phaeopus variegatus, Asian Dowitcher Limnodromus semipalmatus and Oriental Pratincole. This area has been jointly managed by the Yawuru Traditional Owners and the Department of Conservation of Western Australia.

Migratory shorebirds from Roebuck Bay fly up to 10,000 km each year from Roebuck Bay to Arctic breeding grounds. They, however, cannot do this long flight in one long haul. Many migratory shorebirds stopover at the Yellow Sea to feed before heading to Alaska or Siberia to mate and nest. Due to recent and accelerating loss of intertidal mudflats in the Yellow Sea as a result of industrialisation, these vital feeding grounds are disappearing. The result is major reductions in many species, particularly the Great Knot and Red Knot, the Curlew Sandpiper and several other species.

Since shorebirds have declined at Eighty-Mile Beach and Roebuck Bay over the last decade, Australia has investigated possible causes of declines observed in migratory shorebirds numbers, including whether any declines may be the result of habitat change at staging areas in the Yellow Sea. One reports is available here

A major program is underway at BirdLife Australia entitled ‘Shorebirds 2020’. The program is designed to reinvigorate and coordinate national shorebird monitoring in Australia and is a collaborative enterprise between BirdLife Australia and AWSG, through funding from the Australian Government’s Caring for our Country and WWF-Australia. The primary objectives of the program are to collect data on the numbers of shorebirds in a manner that can be utilised to aid their conservation and management, specifically long and short-term population trends, and explore what may be causing those changes.

Over the last year the Shorebirds 2020 team has been developing a monitoring program for shorebirds in Australia that will allow them to detect national population trends, mapping important shorebirds areas, and putting together a shorebird counters toolkit online. The main recommendation to come out of this work so far is that the team needs to count shorebirds at more sites – around 150 – in order to be able to detect population trends at the national level for the majority of shorebird species. For more information visit the Shorebirds 2020 website.

These new FSN sites can be searched on the following link where the FSN Site Information Sheets are placed. With these two designations Australia contributes to one of the EAAFP objectives contained in the Partnership Document and the Implementation Strategy 2012-2016, which is to achieve the target of 7-10 new sites per year.