By Yongbin Kim of news1
Translated by EAAFP Secretariat 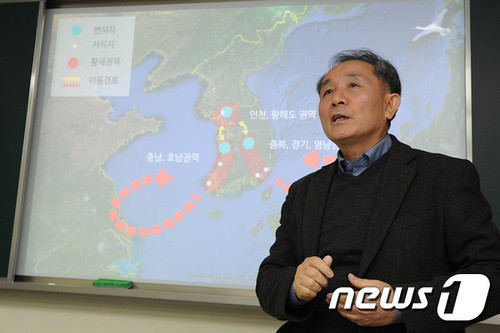 Professor Siryong Park of Eco-institute for Oriental Stork (ECOSOS) at the Korea National University of Education, briefing on ‘Current status of the released Oriental Stork K0008 and its migration to Japan’ ? News1

A scientific publication will be submitted on an Oriental Stork that has arrived in Japan after flying over 1077 kilometers in a non-stop flight without any food or rest.

“I’m planning to publish a paper in an international journal of ornithology about the new record of an Oriental Stork flying 1077 kilometers without any food or rest,” said Professor Siryong Park of Eco-institute for Oriental Stork (ECOSOS) at the Korea National University of Education, on 14 December 2015.

He announced the plan at the briefing ‘Current status of the released Oriental Stork K0008 and its migration to Japan.’

“Birds leave Russia to escape the cold weather flying over 3000 km in two months, roosting and feeding during the journey. K0008 was the first stork ever to fly such a long distance without stopping” explained Professor Park.

This bird, K0008 was released in Yesan and stayed in Sinan last September 3rd, arriving at Erabu Island in Japan the following day at 7 p.m. It flew a distance of 1077 km, nonstop in 34 hours.

However, right after the arrival the signal of the device attached to its body that indicated location was cut-off. After two days, on September 28, the bird was seen by a local resident, but it is unclear whether the stork is currently alive or not.

“Hatching last April, this was a young bird that had no experience of long-distance flight. It is highly likely that it died due to the exhaustion,” he explained.

He added, “There are no predators in the island, but it could have been attacked by wild dogs. In any case like this, the stork’s traces such as feathers would be hard to find.” 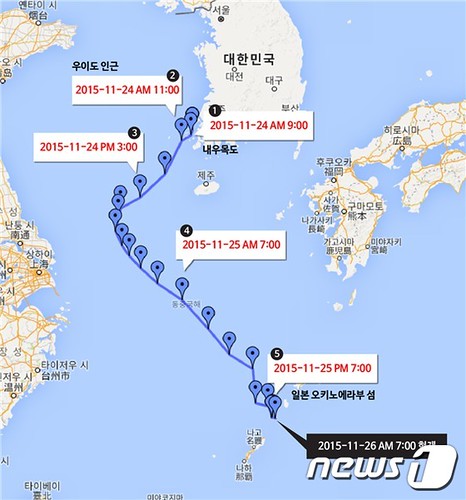 The original flight direction of K0008 was to China, near Nantong and Shanghai. However, at 200 kilometers before the arrival, it changed its direction and headed towards Japan.

Flight speeds of an average 30-40 km/hour had dropped down to below 10 km/hour after the direction change.

“At the time there was heavy rain and a rather strong wind in the area. The bird might have gotten its feathers wet under a great amount of rain. It is highly likely that the bird changed direction to head to Japan, with the help of the northwestern wind. A sort of emergency landing, so to say,” he analyzed.

Professor Park also drew a positive result from the case study of this stork.

The mouth of Yangtze River, the original destination of the stork is a gathering place of all the migratory birds originating from Siberia in the winter season. Nantong also has 10 million hectares of National wetlands conservation area.

“If the bird had arrived safely in China, it would have stayed there in winter and returned to Yesan through the west coast in the spring. The flyway is considered to be one of the original migratory routes of storks that used to breed in central Korea,” he explained.

He continued, “It’s a pity that the return path of the stork has not been verified, but we expect to find it out later, when Korean storks successfully return to the wild.”

He emphasized, “We need to develop a system to estimate the location of the emergency landing point and to try to rescue storks in case of emergency in cooperation with Japan. We need a safe return program for storks not only in Area 1, but also in Area 2 and 3.” 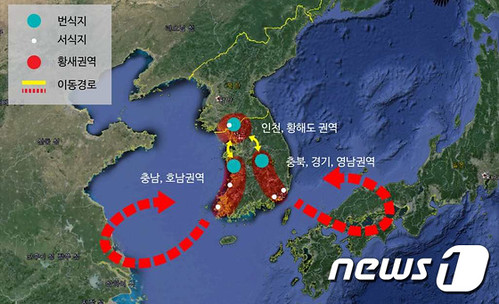 The Oriental Stork, designated as National Monument number 199 and Class ? Endangered Species got extinct in Korea in the 1970s.

In 1996, ECOSOS imported 38 Oriental Storks from Russia, Japan and Germany, and succeeded in artificial reproduction. The institute is planning to release about 10 storks into the wild every year.

The researchers of the institute has attached tracking devices to the released Oriental Storks that send out location signals every two hours, and are recording their migratory route and habitats.

To read the original article (in Korean), click here.