Together with ‘SBS in China’ I am leading a group of international wader experts (Guy Anderson from RSPB, Richard Hearn from WWT, Ewan Weston from Highland Ringing Group and David Melvile from New Zealand) who have come to China to help Professor Chang Qin of Nanjing Normal University and Jing Li and co-workers of ‘SBS in China’, the Task Force member for Eastern China to develop a wader ringing program on the Jiangsu coast.

There are two main objectives of the visit. First to individually mark some Spoonies at a location away from the breeding grounds and second to set up a wader ringing program to help develop studies of the importance of the Jiangsu coast for a wide range of species.

We arrived late on Friday afternoon and immediately went out to look at possible catching sites near to our hotel and to get to know the two bird trappers who use traditional techniques to catch birds – now for ringing but in the past they were for the pot. Tang Yong Fa has been trapping birds for decades and used to catch for the pot before working for the Chongming Dongtan Nature Reserve [EAAF002] to help catch birds for banding. Chen Teng Yi is his protégée, who learnt his skill while working at the reserve. He is now working in a hospital but returns to the mudflat whenever he can to help the banding operation and is writing a book about the trapping method and the history of the trappers so that it is not lost as bird trapping for food declines. 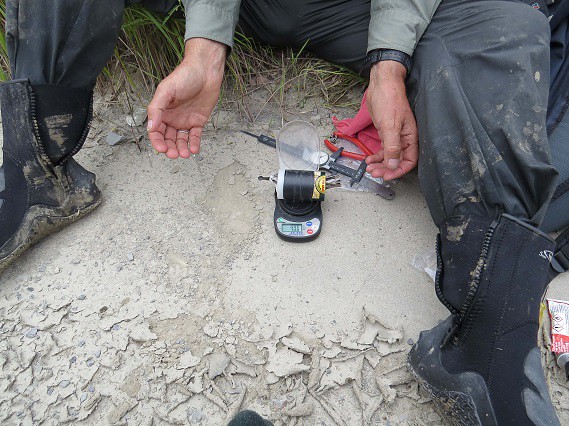 Back to the hotel to recover from the flight before heading out early next morning with the trappers who were confident that they could catch birds on the rising tide and near the roost at high tide. They only caught three birds on the rising tide – a Redshank and two Dunlins BUT one of the Dunlins had a ring on it! It had been banded in the autumn of 2014 in autumn passage in Kamchatka! As the tide rose they moved to the roost area behind the sea wall and the first pull produced one bird – a juvenile Spoonie! After that the birds came thick and fast with 140 caught in three hours. There were a wide range of species from Long-toed Stint to Redshank and Greenshank. 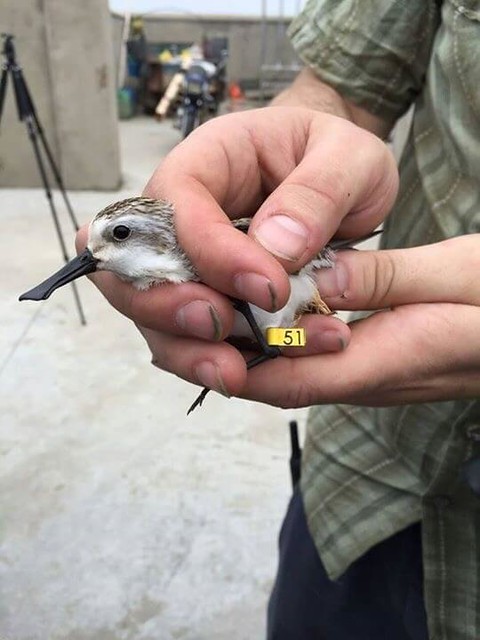 We got back late afternoon ready for a celebration meal but no alcohol as two hours later we had to go to another sight to set mist nets and catch overnight. This has been the pattern for the last 4 days with 2 to 3 hours sleep grabbed here and there between tides. At first the mist netting was not very successful with about 50 birds caught a night but of a very wide range of species 14 on the first night! But then we cracked it and caught 150 on the last two nights and 2 Spoonies on each night! The trappers have changed tack catching out on the feeding areas targeting just Spoonies and slowly walking them towards the net this way they have caught a further 2. So far we have caught a total of 10 Spoonies which is way more than our wildest dreams two more days to go and we have already exceeded the target that we set ourselves! We have also caught 2 Nordmann’s Greenshank which are also one of the most Endangered waders in the world. It has not all been good. On the way back from spending an hour resighting flagged Spoonies on the mudflats feeling really good having seen both Lime 08 and one of last year’s juveniles marked in Kamchatka I came across a line of fishing nets in the area where many Spoonies congregate before going to roost. There were no birds in the nets but I felt sure that birds would get caught if it was dark. The following morning I returned after finishing our mist netting overnight and in 300 m of illegal fishing nets I found 70 dead birds and one was a juvenile Spoonie. What a sad end to a bird that  had hatched from a chick in the arctic only 2 months before! On the bright side I did release two Kentish Plovers and a Little Tern that had gone in on the falling tide and so had  not been drowned. We decided that we had to go back to this and another line of nets that was found on the rising tide that night to release as many as possible. Mercifully the line had been taken down. The second line only had 10 birds in it and most were later released and although dishevelled had a good chance of survival. 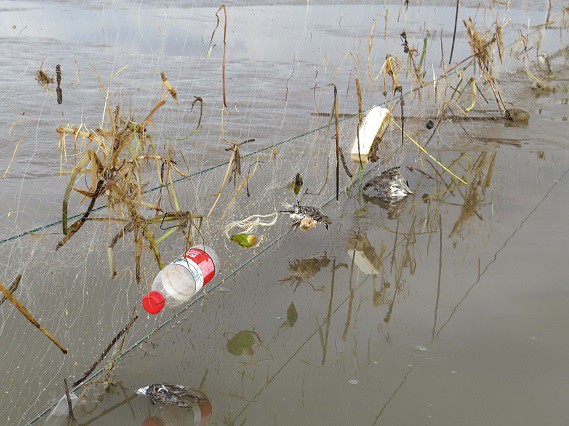 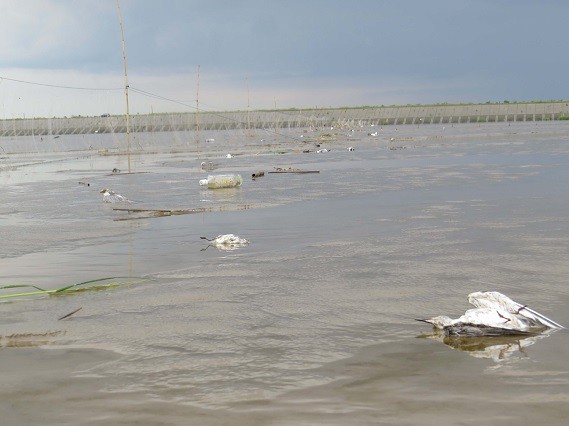 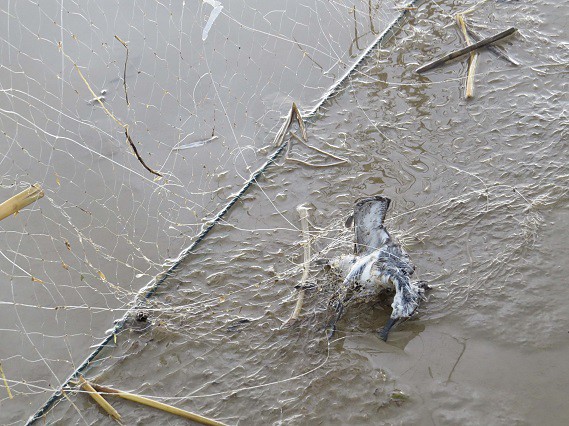 ‘SBS in China’ is now preparing a plan to work with the fishermen to try and find ways to reduce the losses in future so maybe some good will come out of this lost Spoonie.

Working with the Chinese trappers has been fantastic we have learnt a lot and we have been able to pass on some of our skills as well. I am sure it is a friendship that will go from strength to strength.