In May last year a Short-tailed Albatross Phoebastria albatrus chick was found on Nakodojima Island, five kilometres south of Mukojima Island in Japan’s Ogasawara Islands where a translocation project (70 chicks over the four years 2007-2011) was undertaken, but it was not possible to identify the parent birds (click here). 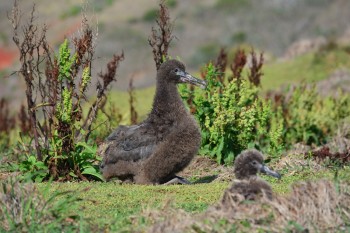 In the current breeding season, a pair made up of a female hand-reared on Mukojima in 2009 and a naturally-reared male bird from Torishima was identified on Nakodojima.  The pair failed to breed this time but it was confirmed that they were the parents of last year’s chick by a parentage DNA test in a cooperative study conducted by the Tokyo Metropolitan Government, the Institute of Boninology and the Hokkaido University Museum. 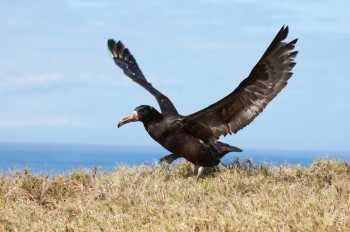 A young Short-tailed Albatross on Mukojima Island, photograph by the Yamashina Institute for Ornithology

This finding supports the success of the reintroduction of Short-tailed Albatrosses from Torishima to the Ogasawara Islands.

With thanks to Tomohiro Deguchi, Yamashina Institute for Ornithology for information.