Eaaflyway > News > A new site for the EAA Flyway Site Network: ‘Furen-ko and Shunkuni-tai’, in Japan

A new site for the EAA Flyway Site Network: ‘Furen-ko and Shunkuni-tai’, in Japan 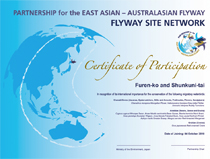 Furen-ko and Shunkuni-tai site in Japan joined the EAA Flyway Site Network as its 99th site on 4 October 2010. The site is located in the eastern part of Hokkaido, Japan near Nemuro City, and the total area of the site is 6,139 ha. Furen-ko is a brackish lake flowing into Nemuro Bay, and tidal flats, salt marshes and Zostera seagrass beds have developed in the lake while Shunkuni-tai is a sandbar formed between Furen-ko and Nemuro Bay. The site meets Network criteria for eight Anatidae species and three shorebird species and supports a non-migratory population (some breeding) of the globally threatened Red-crowned Crane Grus japonensis. Spoon-billed sandpiper Eurynorhynchus pygmeus, classed as Critically Endangered (CR) in the IUCN Red List, occasionally inhabits this site. The site is an important staging area in spring and autumn for many migratory waterbirds including shorebirds, ducks, swans and geese. This site is also a Ramsar site (no. 1542, 2005). A Google Earth link to the site is accessible on the Partnership website at here.