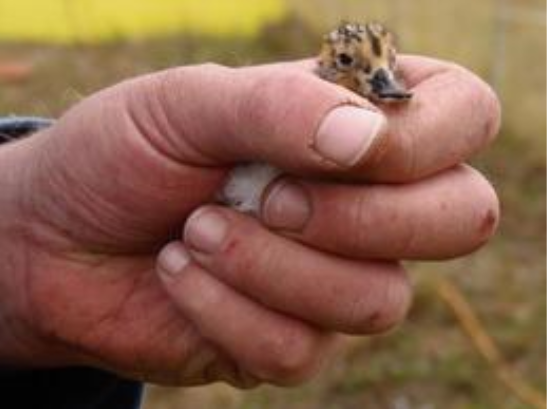 Hand-reared SBS chick before being released in Russia © Roland Digby

November 2013; A rare hand-reared spoon-billed sandpiper has been spotted for the first time in the wild, more than 8,000km from where it was released in Russia.

Twenty-five of the critically endangered birds have been raised over two years by an Anglo-Russia conservation team on the Russian tundra, before being released to join their wild-born counterparts in migrating to South-East Asia. However until now it was unknown whether any would be spotted until they return to Russia to breed aged two-years-old, so the news one has been seen in Thailand, on the coast near Bangkok, and another in southern China was welcomed.

WWT Head of Species Conservation Department, Baz Hughes said: “This is really exciting news. We now know that spoon-billed sandpipers, raised by our avicultural staff on the Russian tundra, can migrate with their wild counterparts to wintering areas a quarter of the way around the globe.”

Conservationists take eggs from wild spoon-billed sandpiper nests, prompting the parent birds to lay a further clutch. The hand-reared chicks are safe from predators and, with the wild-raised chicks from the second clutch, it increases the total number of birds fledging by up to ten times. The hand-reared birds are all marked with small white plastic leg flags. Marking birds allows them to be identified later and helps reveal information about their movements and behaviour.

Christoph Zöckler, Coordinator of the East Asian- Australasian Flyway Partnership’s Spoon-billed Sandpiper Task Force said: “We’ve learnt an enormous amount about spoon-billed sandpipers’ movements over the last few years but there are big gaps. While we still don’t know all the places they stop over on migration, we can’t protect them or address any threats they face there.”