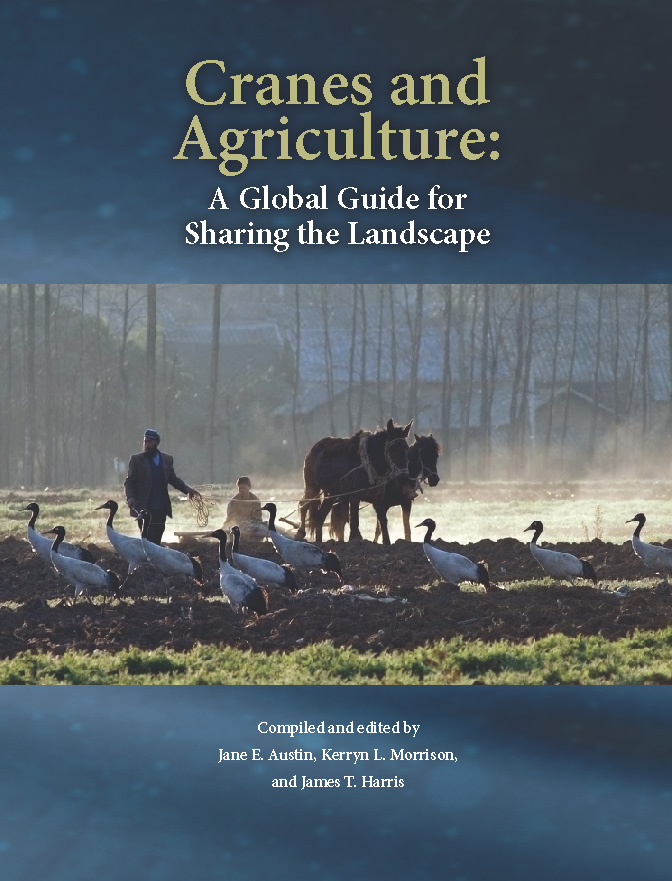 Landscapes and regions important to cranes worldwide also are areas important to agriculture production. Cranes have had a close relationship with arable and pastoral agriculture that goes back hundreds and thousands of years. However, rapid changes in agriculture over the last 100 years have become a key threat and an opportunity to the world’s cranes.

“Agriculture is involved in nine of the 19 threats to cranes identified in the 2018 International Union for Conservation of Nature Species Survival Commission (IUCN/SSC) Crane Conservation Plan, affecting all 15 species in some way,” said Kerryn Morrison, Vice President International – Africa of the International Crane Foundation and Co-Chair of the IUCN SSC Crane Specialist Group. “Crane species most closely reliant on wetlands are the most threatened, whereas those more associated with grasslands are less threatened and have better adapted to open, productive landscapes.”

Among the top threats to cranes are loss of wetland and grassland habitats, altered hydrology from dams and water diversions, and changes in agricultural practices. Indirect threats related to agriculture include poisons and power line collisions. As human populations and agricultural demands have expanded and intensified, conflicts between cranes and farmers become more severe. However, some populations have benefited from agricultural foods, lands and practices, and most crane species have adapted to using agricultural lands and crops in some way.

The need to share information via a publication that outlines how cranes can live harmoniously on agricultural landscapes with farmers and agricultural producers served as the impetus for a group of researchers and specialists to create, “Cranes and Agriculture: A Global Guide for Sharing the Landscapes.”

In a 2010 “Cranes, Agriculture and Climate Change” workshop of the IUCN Crane Specialist Group at Muraviovka Park in Russia, participants from 13 countries and five continents identified the need for a resource that synthesized information about the crane/agriculture interface that could help guide conservationists and other stakeholders. This guide gathers published information and personal accounts and experiences from around the globe.

“Cranes and Agriculture” outlines the life history and feeding ecology of cranes as they relate to both natural habitats and agricultural lands. It explores the patterns and drivers of agricultural development and change over the last 100 years and explains how crane populations have responded. The guide examines the interaction between cranes and domestic animals. It describes the various direct and indirect threats that the crane/agriculture interface poses to cranes.

The guide also reviews the methodologies currently used to mitigate for human/wildlife conflicts that arise as a result of this interface; walks through the situation from a farmer’s perspective; and provides ideas for programs that either mitigate for conflicts that arise, or make use of opportunities provided by the crane/agriculture interface. In addition, 18 case studies from 13 countries provide examples of issues discussed in the chapters.

This guide is intended as a first step in sharing knowledge and experiences of the crane/ agriculture nexus from a diversity of situations, landscapes, flyways and species, to find and disseminate ways to sustainably balance the needs of cranes and agriculture.

Most importantly, the publication includes a call to action, to promote harmony between cranes and agriculture worldwide.

“On one side of this harmonious balance, we know that food production will need to increase by about 70% by 2050 to cope with human population increases, which in turn will increase competition between humans and wildlife for land and water resources,” explained Morrison. “On the other side is our concern that the greatest threats to cranes worldwide are related to agricultural activities.”

Information within the publication recognizes that alternative methods to reduce conflicts between cranes and farmers are available, ranging from relatively simple, inexpensive disturbance methods to changes in land use at a landscape scale.

This 306-page publication is free online at https://www.savingcranes.org/wp- content/uploads/2018/10/cranes_and_agriculture_web_2018.pdf. Preordered printed copies are $30 until 30 April 2019 by contacting Elena Smirenski (elena@savingcranes.org)

More information about cranes and conversation is available online at www.savingcranes.org