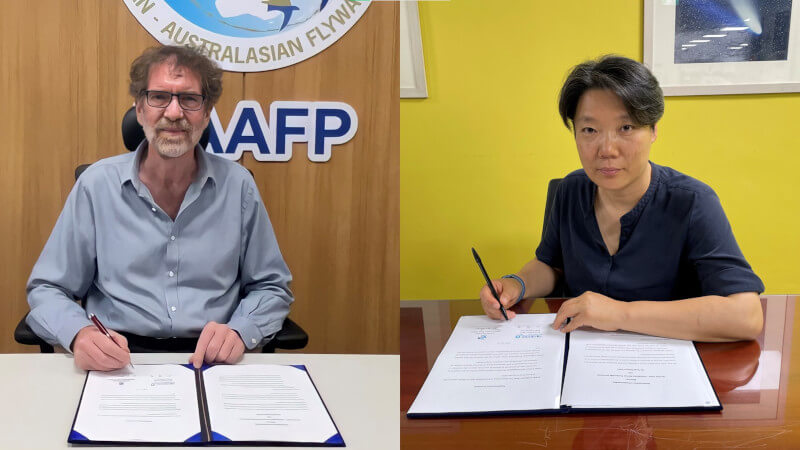 The MOU primarily aims to promote the ecological value of migratory waterbirds and their habitats in the country, particularly in Seoul, including Yeouido Bamseom and Gangseo wetlands, which are designated Ramsar Sites (Han River-Bamseom Islets). EAAFP Secretariat also aims to collaborate on educational activities and build relationships through continuous international cooperation on raising public awareness for waterbirds and wetland ecosystem conservation.

In addition, one of the objectives of this relationship is to promote “World Migratory Bird Day” (WMBD), an international event that raises awareness for the conservation of migratory birds and their habitats. In line with WMBD, that is held every second Saturday in May and October, the Seoul Science Center will promote and participate in ‘World Migratory Bird Day’ events.

Mr. Doug Watkins, Chief Executive of EAAFP Secretariat said “This collaboration will be a wonderful opportunity to promote the East-Asian Australasian Flyway Partnership in Seoul, the capital city of Ro Korea. Reaching a larger Korean audience will further aid in raising awareness and achieving the Partnership’s goals for the conservation of migratory waterbirds and the wetlands they depend on. Through this collaboration, the Secretariat will also be able to bring local CEPA work done by the Seoul Science Centre to international audiences, which will inspire more communication efforts for conservation. It’s a win-win collaboration.”

Dr. Jung-Kyu Lee, Head of Seoul Science Center expressed, “The wetlands in Seoul have high value as a hot spot for biodiversity in the middle of the Seoul Metropolitan City and as a major feeding site in the flyway. As Seoul citizens have access to the wetlands in Seoul, it is worthwhile to educate them about the coexistence of humans and nature especially in an era of climate crisis and ecosystem collapse. For the Seoul Science Center, this MOU is an opportunity to raise awareness for ecosystem conservation to Seoul citizens and establish international collaboration and networks for science education.”

Seoul Science Center was launched in May 2017. It aims to popularize science amongst the public, bringing citizens with different experiences closer to science, and has operated various science education projects, including ones specializing in birds such as ‘Four Seasons With Birds’ and ‘Wild Bird Collision Prevention Project.’