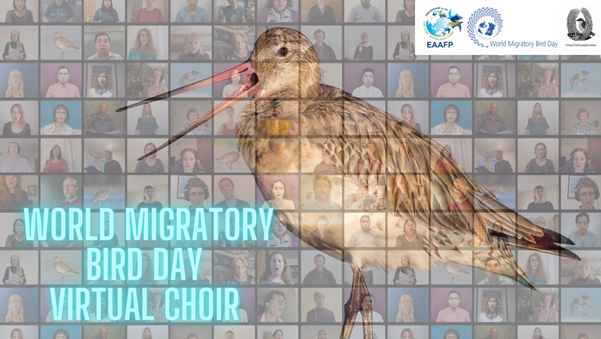 On 8th May, 2021, the East Asian-Australasian Flyway Partnership who partnered with Bowerbird Collective, launched the first ever WMBD Virtual Choir to celebrate World Migratory Bird Day (WMBD) 2021 in line with the theme “Sing, Fly, Soar – Like a Bird!”. In a unique effort to celebrate and focus on the phenomena of “bird song” and “bird flight”, participants from twenty countries joined the virtual choir to raise their voices for migratory bird conservation.

To symbolize the connection between migratory birds and people with their unique songs and flights, the song was composed by Simone Slattery, an Australian violinist and music performed with Anthony Albrecht, a cellolist, both are founder of the Bowerbird Collective. The song has no lyrics so as to enable people from all over the world to join the virtual choir despite their languages and nationalities. Featured in the video were a few Flyway Sites showcasing how migratory birds rely on these habitats during their migratory journey, these include Roebuck Bay (EAAF 111) Australia; the Copper River Delta in Alaska; and wetlands in Southeast Asia.

Enjoy the WMBD 2021 theme song by the WMBD Virtual Choir

The virtual choir was made possible through the dedication of the participants from all over the world who submitted a recording of themselves singing like a bird to this WMBD theme song. These include:

The WMBD Virtual Choir was a success due to the creativity and commitment of the Bowerbird Collective and the generous support of The East Asian-Australasian Flyway Partnership, Arts South Australia, and BirdLife International.

Click [here] for more information on the WMBD Virtual Choir.