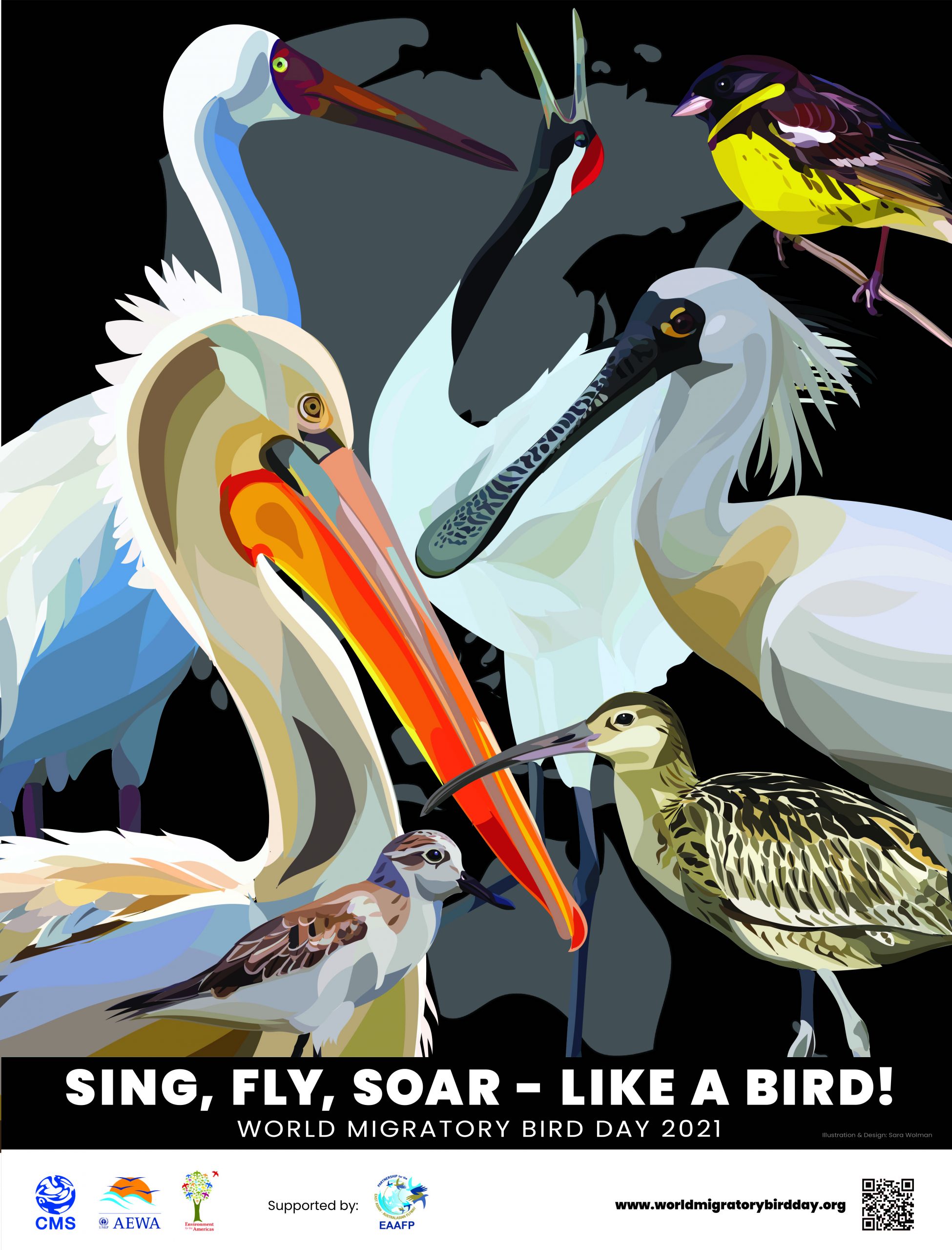 We are celebrating World Migratory Bird Day (WMBD) twice a year, on every second Saturday of May and October. This day aims to raise awareness of migratory birds and calls for international cooperation to conserve them. The global annual campaign is held together with the Convention on Migratory Species (CMS), the African-Eurasian Waterbird Agreement, the Environment for the Americas, and the East Asian – Australasian Flyway Partnership (EAAFP).

Or directly from EAAFP webpage: https://www.eaaflyway.net/world-migratory-bird-day-2021/

Learn about the migratory birds featured on the East Asian-Austrasian Flyway poster:

Information: The Spoon-billed Sandpiper is the rarest shorebird endemic to the EAA Flyway. It is a small shorebird, with a black spoon-shaped bill. The bird breeds in far northeastern Russia and winters in coastal mudflats in Myanmar, Bangladesh, Thailand, Vietnam and South China. The population count of the species is about 300 to 700 individuals of all ages. Habitat loss and degradation, hunting, pollution, invasive species (cordgrass Spartina spp.) are the direct threats to them.

Information: The Far Eastern Curlew is the largest migratory shorebird species in the world. They have a conspicuous long thin curved bill. It breeds mainly in northern China, Siberia and Kamchatka in Russia, while mostly stays in Australia and some in New Zealand during the non-breeding period. The species has a drastic decline in population in recent years due to habitat loss, human disturbance, and hunting.

Information: The Siberian Crane is a large waterbird. An adult bird has red skin on the forehead, face and sides of the head, with white plumage with black wingtips. The bird is now only found in one main population in East Asia. This Eastern population breeds in northeastern Siberia and winters at Poyang Lake in the Lower Yangtze River Basin in China. Habitat loss as well as illegal taking, and pollution are the main threats to the bird.

Information: The Red-Crowned Crane is a large waterbird restricted in East Asia region. An adult bird covers with mostly white plumage, has a red patch on forehead, black band cover from the beak to the neck. There is a migratory population of the species which breeds in northeast China, Russia and migrates down to China, Japan, and Korea Peninsula, as well as a  resident population on the island of Hokkaido in northern Japan. Wetland habitat loss, illegal hunting and pollution are the main threats to the species.

Information: The Black-faced Spoonbill is a waterbird restricted mainly to the East Asia region. It is the smallest and rarest of the six spoonbill species in the world. They breed mainly on outlying islets of the northwestern coast of the Yellow Sea, winter in Southern parts of Ro Korea, Japan, China and Southeast Asia.  There are about 2,250 mature individuals worldwide. It is recognized as a successful case of conservation in the field.

Information: The Dalmatian Pelican is the largest freshwater bird in the world. It has a big greyish beak with an orange or yellowish gular pouch for feeding. Although the breeding range of this species spans from south-eastern Europe to western Mongolia, the small eastern population in EAA Flyway only breeds in western Mongolia, and winters along the east coast of China. Hunting, habitat degradation due to wetland alteration and destruction, collision with overhead power lines are the main threats.