Seabirds spend their entire life in the open ocean, hence, they are a good indicator of coral reef health. Their nutrient-rich droppings fertilize roosting grounds and the surrounding water to the benefit of other marine life. Seabirds are one of the most highly threatened species of animals. Although they have a relatively long life span, they breed much slower and have fewer offspring than other birds in general.

We use various monitoring methods and integrate results for a more accurate estimate of the populations.  Distance counts are conducted once a month, while direct counts are done once a quarter.  In-flight counts are done late in the afternoon, and dawn counts are made before the birds leave the islet to forage for food.  When called for, we would do night counts of birds that come to roost after sundown.

Adults, subadults, juveniles, pullus, eggs, and nests of each species are counted.  Two teams conduct the count of the various species in various life stages.  In all, it took a total of 39 teams to complete the survey.

In May each year, we join the marine park rangers (MPR) for quarterly monitoring.  The Covid 19 situation interposed several complications that delayed our trip, with interesting results.  Together with WWF-Philippines staff, and volunteers, we were finally able to set sail on 2 June 2021. This year’s survey was funded by the East Asian-Australasian Flyway Partnership (EAAFP), Department of Environment and Natural Resources (DENR), and Pilipinas Shell Foundation, Inc. (PSFI). Report of the surveys will be shared by the end of 2021.

Tubbataha Reefs Natural Park is both a Ramsar site and a Flyway Network Site of the EAAFP. Located 92 nautical miles southeast of Palawan, it is a 97,030-hectare marine protected area which was established on 11 August 1988.  It is the largest no-take marine protected area in the Philippines. Its two islets are among the last known safe breeding habitats of seabirds in Southeast Asia. 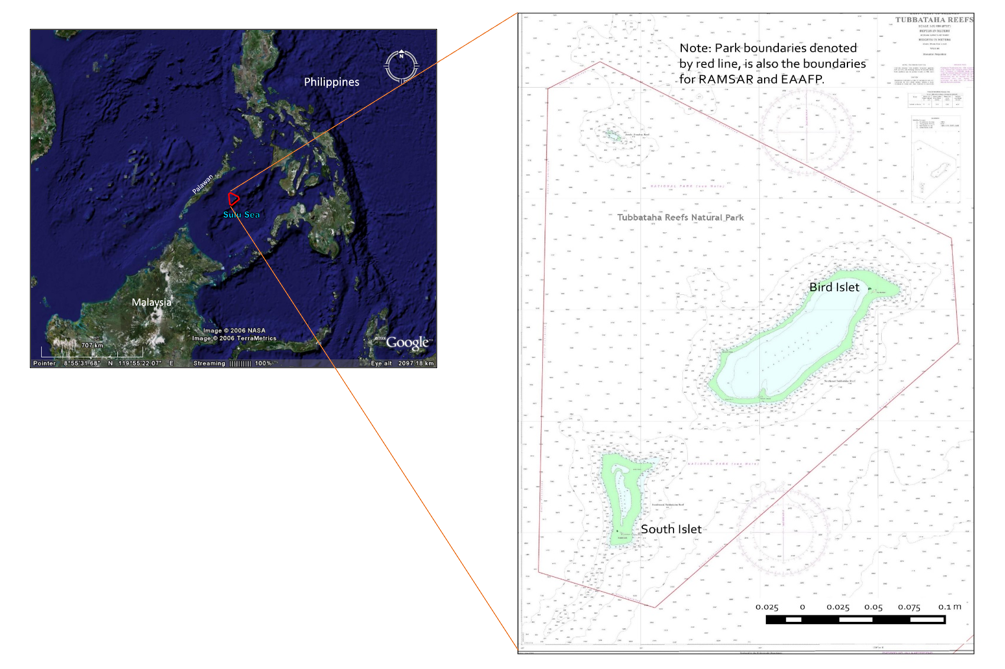 The Tubbataha Reefs Natural Park is in the middle of the Sulu Sea. It is composed of two atolls and a reef. The Bird Islet is in the North Atoll and the smaller South Islet is located in the South Atoll.

Our team from Puerto Princesa City met with MPRs at the ranger station upon arrival. Research Officer Retch Alaba gave a briefing on the work at hand and assigned tasks for each person. Photo © Rowell Alarcon

The only known breeding Masked Booby in Philippines lain an egg for the fourth time (!) since 2019. A second egg appeared a week later. Photo © Retch Alaba

We used the WWF-Philippines research vessel, M/Y Navorca for the survey. Here, the team disembarks for the survey in South Islet. Photo © Rowell Alarcon