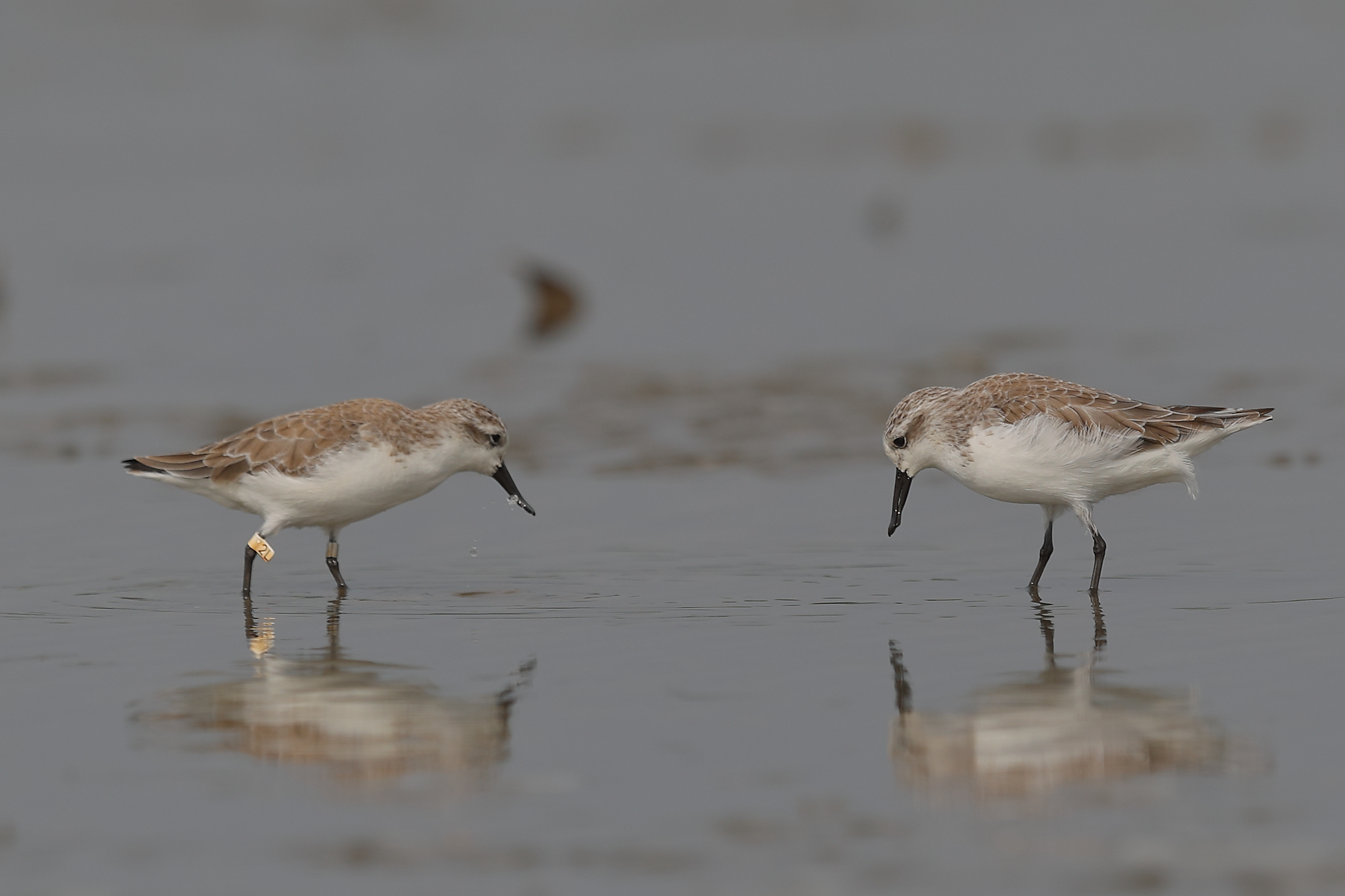 China SBS winter census is conducted annually to assess the distribution and population of this critically endangered species. This year, the census was conducted on January 15-18, covering most of the SBS wintering sites from Hanghzou Bay in the north to Beibu Gulf in the southwest. We recorded a total of 61 SBS individuals during the 2021 winter census, taking up 8% (or more if global population lower) of the global population (773 individuals of all ages, Green et al. 2021). The largest wintering site is Leizhou Peninsula, where 33 individuals were recorded.

Systematic winter census in China started from 2019, organized by Spoon-billed Sandpiper Conservation Alliance. Each year, over 100 observers from more than 20 organizations participate in the survey, making also good use of increased public awareness raising at the same time as well. This report presents the result of the census undertaken in January 2021.

The methodology of this census has been the same as the previous year. Census was held in mid-January when wintering population is relatively stable. The dates scheduled coincided with the overall winter census organized by the SBS Task Force and with the spring tides in Leizhou. All counts in the census were made with binoculars and telescopes, and the survey time varied at different sites depending on local condition. Most of the survey were made on the mudflat at lower tides, artificial high tide roosts were also scanned when allowed.

We recorded a total of 61 SBS individuals in China (Fig. 2). This figure shows a 24% increase from the previous winter (49 individuals). Based on our SBS winter census from 2019 to 2021, we can see a gradual increase in the number of SBS wintering in Minjiang Estuary, Yangjiang, Leizhou Peninsula, Qinzhou, Fangchenggang. Leizhou Peninsula is the largest wintering site in southern China, where in 2021 33 SBS were recorded, taking up 54% of the total count (Table 1). 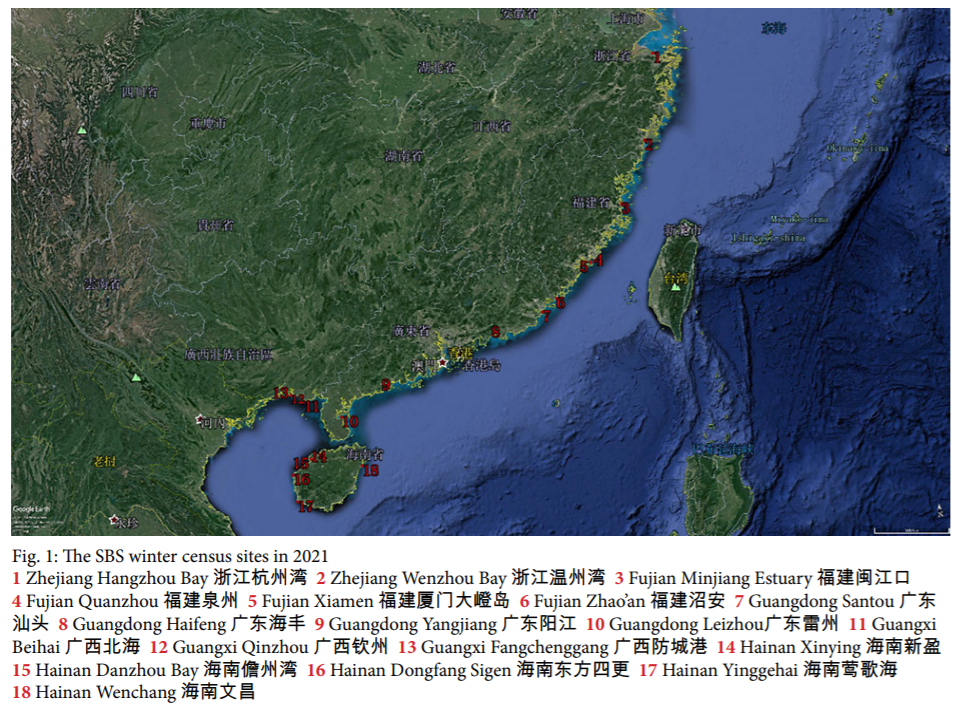 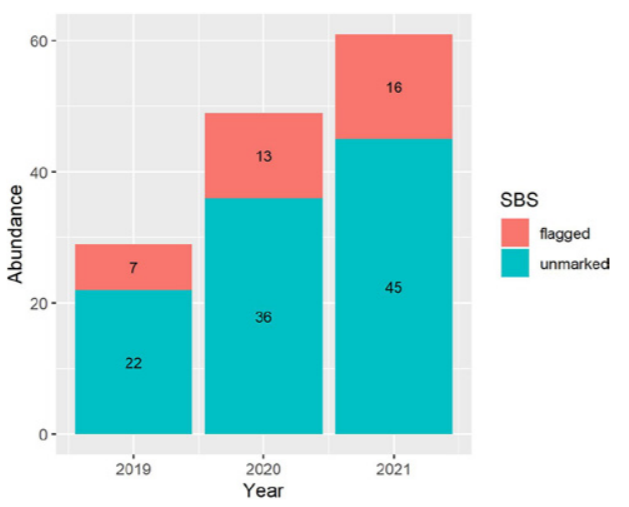 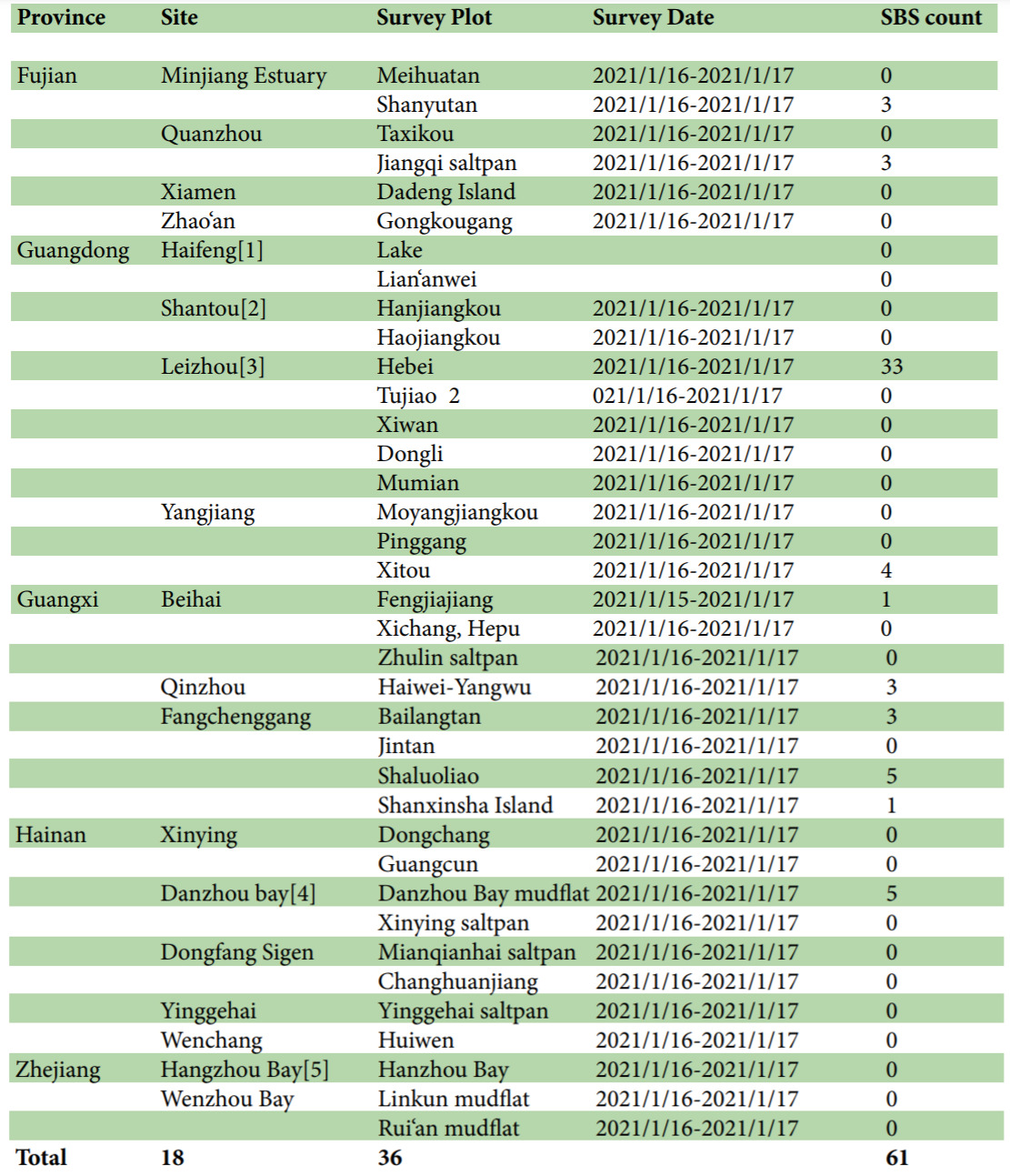 Among the recorded 80 species, five species are listed in the first class protection and nine species in the second class in the National Key Protected Wild Animal List of China. Moreover, one species is listed as Critically Endangered, four as Endangered, three as Vulnerable and seven as Near Threatened in the IUCN Red List.

Table 2: Waterbirds abundance at each site in January 2021

Long-term monitoring can provide important data for waterbird population and habitat quality assessment, it is also the basis of adaptive wetland management. In January 2021, we recorded 61 SBS in total (16 with engraved flag). 21% of the survey locations were found within protected area (Leizhou, Xinying, Haifeng, Minjiang Estuary), and 59% of the SBSs were found in these areas. Local NGOs has also paid attention to some of the sites under no protection but with the high biodiversity like Danzhou Bay, Sanxinsha Island. This combination of NGOs and protection force from government provides a good reference for future conservation work.

From the feedback of observers, illegal hunting has been dramatically reduced in recent years, due to the strengthening of law enforcement and amending the wildlife protection laws in 2021. But human disturbance from tourism, aquaculture, and marine products collection raises new concerns. Collaborative conservation work is in need to mitigate these threats.