Eaaflyway > All News > 2021 in Review: Work and achievements of EAAFP Partners and Secretariat

2021 in Review: Work and achievements of EAAFP Partners and Secretariat 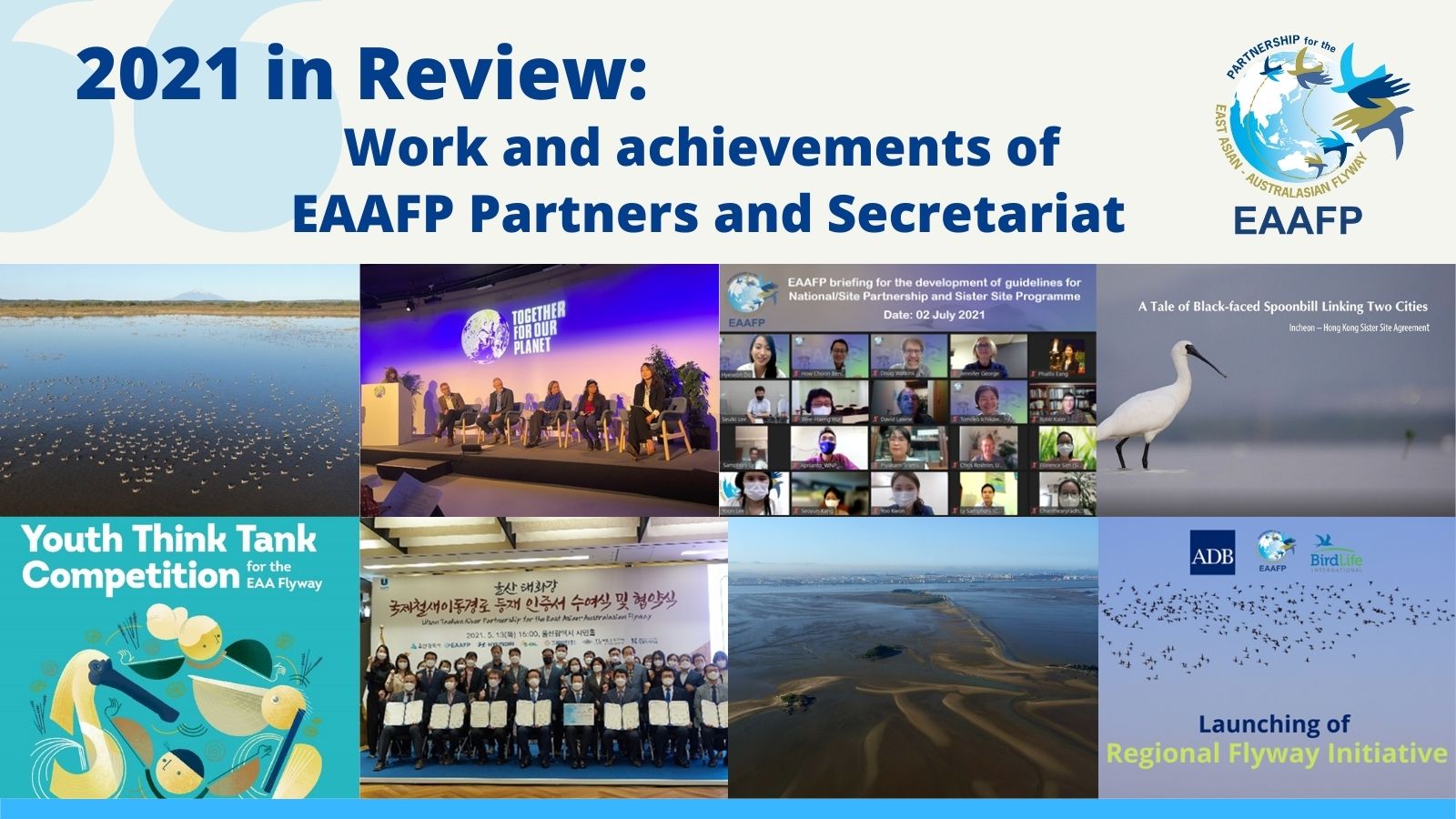 Development of the Flyway Site Network

On 26th July, 2021, the 44th Session of the World Heritage Committee announced the inscription of “Getbol, Korean Tidal Flats” on the UNESCO World Natural Heritage List. The four sites included in the Phase I inscription are Seocheon Getbol (FNS), Gochang Getbol, Shinan Getbol (FNS) and Boseong-Suncheon (FNS) Getbol. The inscription marked a milestone to secure critical habitats in the West/Yellow Sea for migratory waterbirds along the EAAF. EAAFP Secretariat and Partners, supported by providing technical and strategic advice to the Korean Government during the nomination process. (Read more) 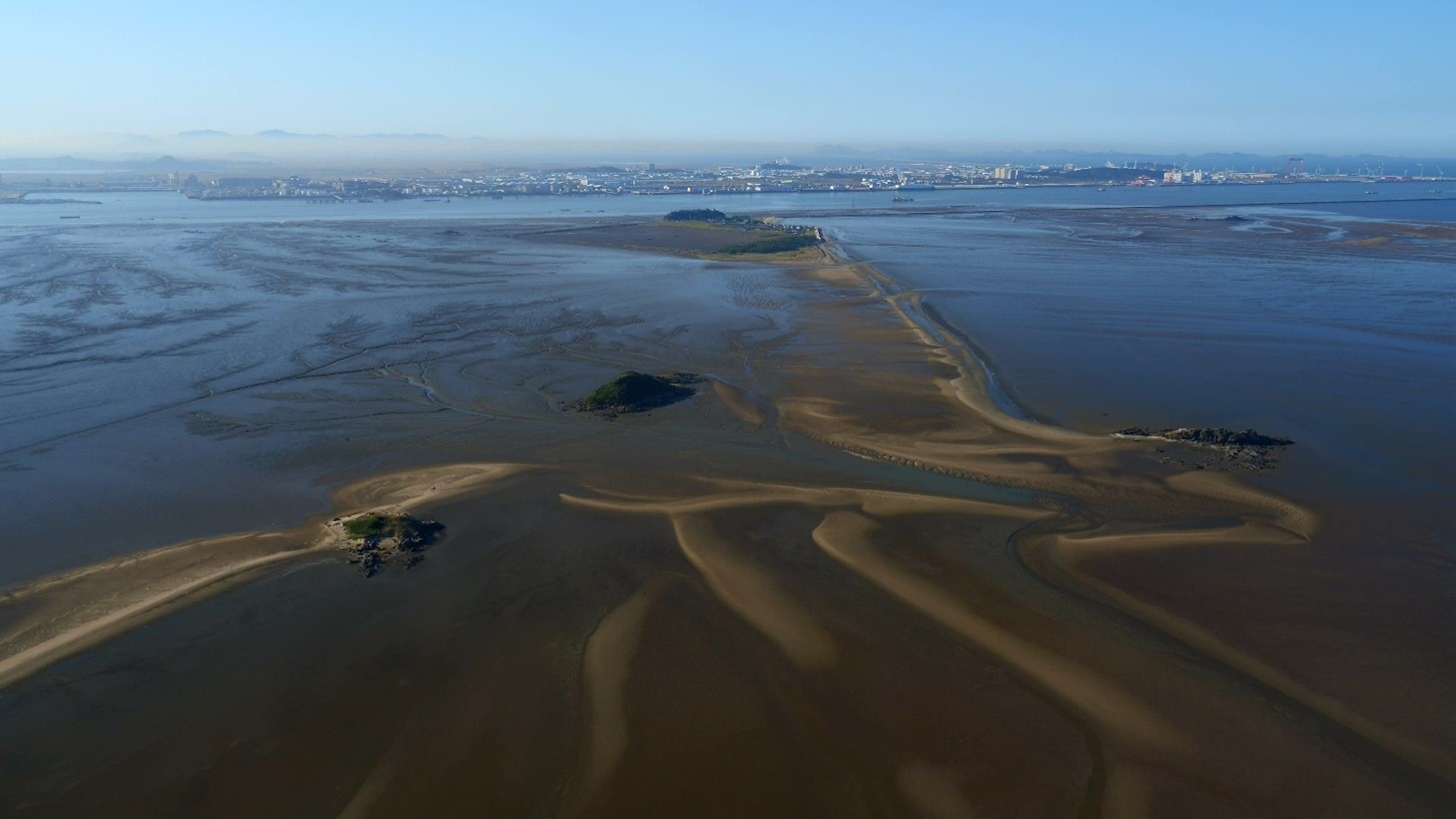 To strengthen the partnership at flyway, national and site levels, following Decision 8 and Decision 9 at EAAFP MOP10, the EAAFP Secretariat has been developing three guidelines on National Partnership, Site Partnership, Sister Site Programme. A briefing webinar was held on 2 July in which Partners were invited to provide feedback and thought. The final draft is expected to be presented at MOP11. (Read more)

Incheon – Hong Kong Sister Site Agreement under the Flyway Site Network continued in an active mode. The EAAFP Secretariat facilitated the work through supporting to improve Black-faced Spoonbill (BFS) monitoring data analysis through the national BFS census in Ro Korea, establishing a national Black-faced Spoonbill Conservation Guild and a strong international BFS Network. A few collaborative CEPA products included a promotional video and revision of the WWF-Hong Kong BFS migration game were made. On 17th December, an annual international forum has been organized under the joint effort of the governments of Incheon Metropolitan City and Hong Kong S.A.R.

5. Collaboration for Conservation of the Hwaseong Wetlands, Ro Korea

Since its designation in 2018, Hwaseong Wetlands Flyway Network Site (EAAF 142) in Ro Korea is another example of active development on conservation actions. The EAAFP Secretariat supported raising the profile of the site, provided warden training, production of the guideline for the management of Hwaseong Wetlands and other CEPA activities. As an action of the Far Eastern Curlew Network in Ro Korea,  the first national-scale census on Far Eastern Curlew was conducted. In July, 2021, a part of the FNS was designated as a national coastal wetland protected area, and designating the site as a Ramsar Site and World Heritage Site Phase II was discussed during the local community-engaging the International Symposium and the local forum. 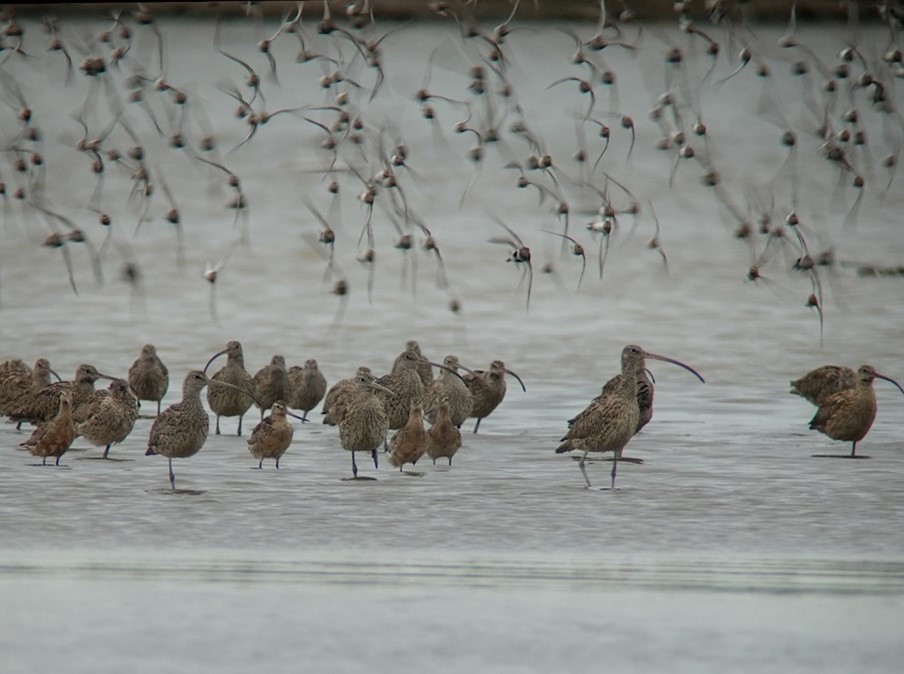 The Youth Think Tank Competition for the EAA Flyway is continuing the vision from the 2020 Flyway Youth Forum to encourage youth to take action in the conservation of wetlands and migratory waterbirds. In line with the competition is a series of training workshops. The first workshop was held on 6th – 7th November (Read more). Out of 32 entries, five finalist projects from China, Indonesia and the Philippines were selected and awarded with a small grant for implantation in 2021 (Read more). 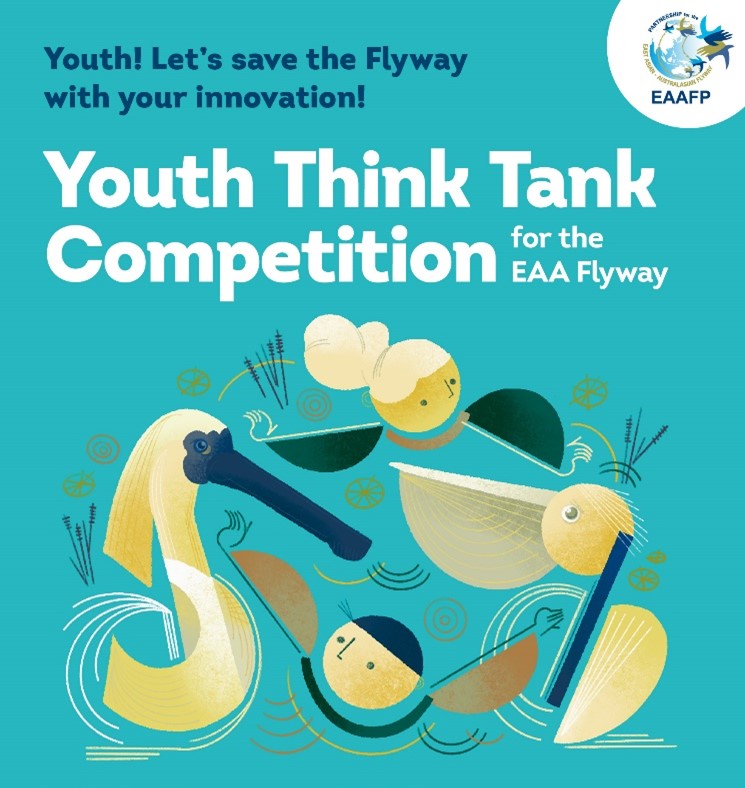 With the theme of World Migratory Bird Day (WMBD) 2021, ‘Sing, Fly, Soar – Like a Bird!’, this year, EAAFP Secretariat and Partners and collaborators continue to celebrate and promote the event. The EAAFP WMBD Small Grant Fund supported 13 activities from 8 countries (Read more).  The Secretariat translated the WMDB poster to 14 languages in the EAA Flyway, held a series of webinars and social media campaigns, including World Migratory Bird day Virtual Choir (Read more). With Social Media, #Legflagchallenge was held to encourage the resighting of tagged waterbirds in the flyway. (Read more). 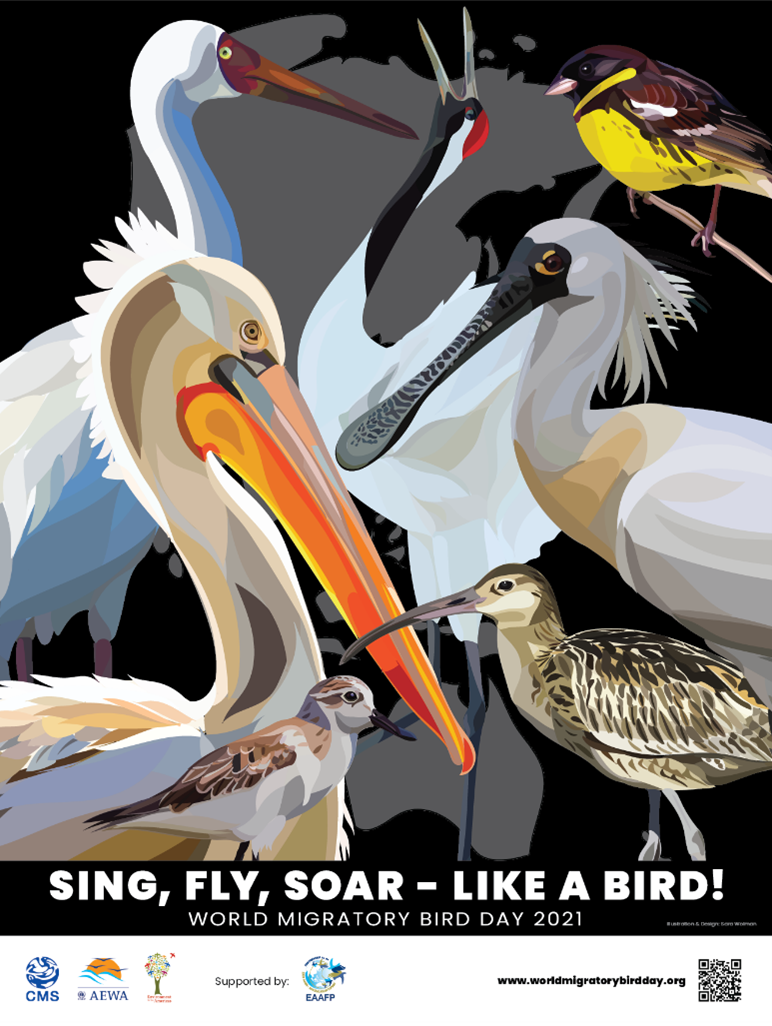 The 1% waterbird population estimate threshold is a key criterion for identifying sites of international importance. Following Decision 12 of MOP 10, Development of a Conservation Status Review of Migratory Waterbird Populations for the EAAFP” has been kick-off, with Wetlands International leading. On 8th April 2021, a webinar was held to inform Partners, Working Groups/Task Forces and other stakeholders about this important project and to seek comments, advice and support (Read more). 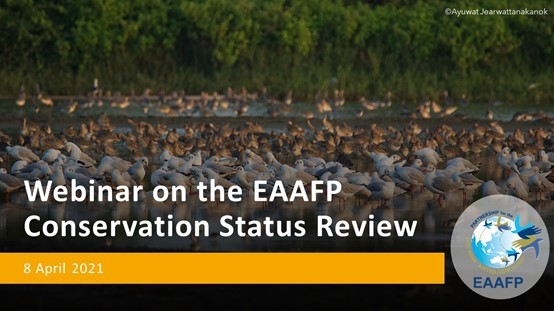 EAAFP Working Groups and Task Forces overcome the COVID obstacle and continue with their activities: The 1st International Symposium on the Conservation of East Asian Population of the Dalmatian Pelican was held in China in May, 2021 (Read more). Spoon-billed Sandpiper Task Force held a 2-days meeting in November, 2021, which was the first official meeting since the last one in 2018 (Read more). Seabird Working Group organized “Strengthening and harmonizing seabird researcher’s network for better coordination on seabird conservation in the East Asian-Australasian Flyway Region” under the 3rd Seabird World Conference in October (Read more). CEPA Working Group restructured and now had a new Chair and two Co-Vice Chairs, leading a monthly meeting since July (Read more). 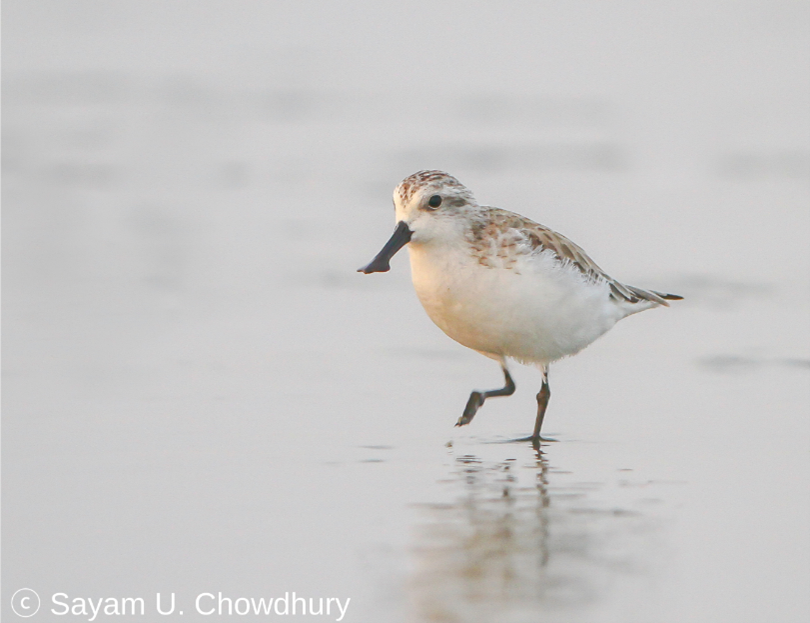 The Regional Flyway Initiative, initiated by Asian Development Bank in cooperation with EAAFP Secretariat and BirdLife International was officially launched on 14 October 2021 at the 15th Conference of the Parties of the Convention on Biological Diversity (CBD COP15) in Kunming, People’s Republic of China. The RFI is a long-term financing mechanism for the EAA Flyway aiming to mobilize large-scale financing and international support to protect the priority wetlands of the East Asian-Australasian Flyway (EAAF) in the countries of East and Southeast Asia, while leveraging on their co-benefits for coastal communities (Read more). 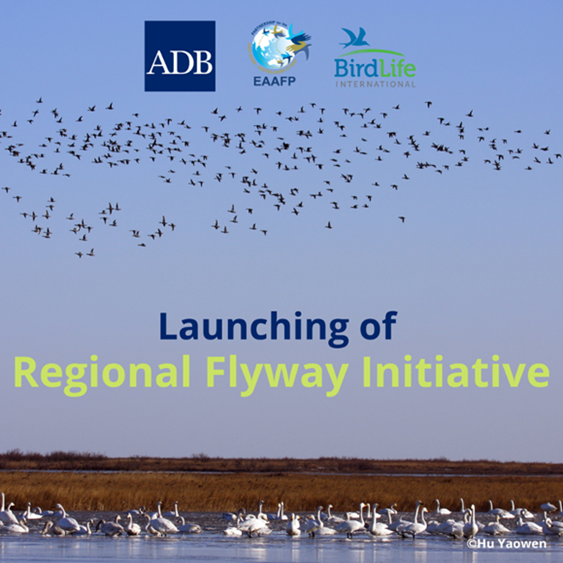 To continue dialogue on the conservation in the West/Yellow Sea region under the Trilateral Yellow Sea Working Group, EAAFP Secretariat engaged and hosted a webinar “Development of a Joint Inventory of the Status of Migratory Birds in the West/Yellow Sea” with IUCN and Ramsar Regional Center-East Asia (RRC-EA). About 20 representatives from government agencies and NGOs from Ro Korea and China joined to discuss the further implementation of activities of the action plan of the Working Group. (Read more) 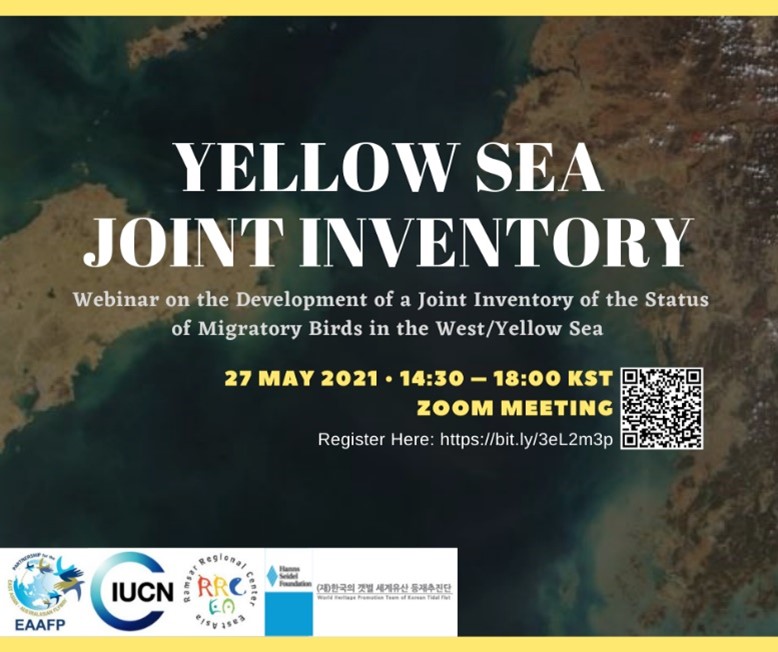 16. Expanding local support and activities in Republic of Korea 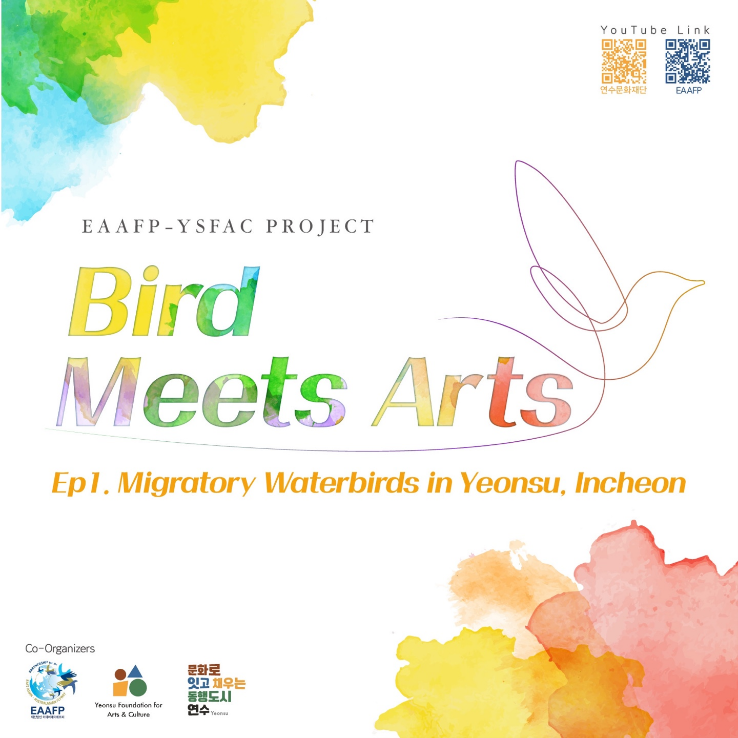 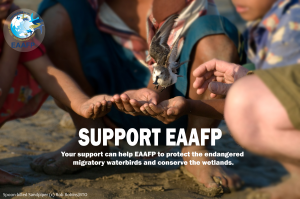