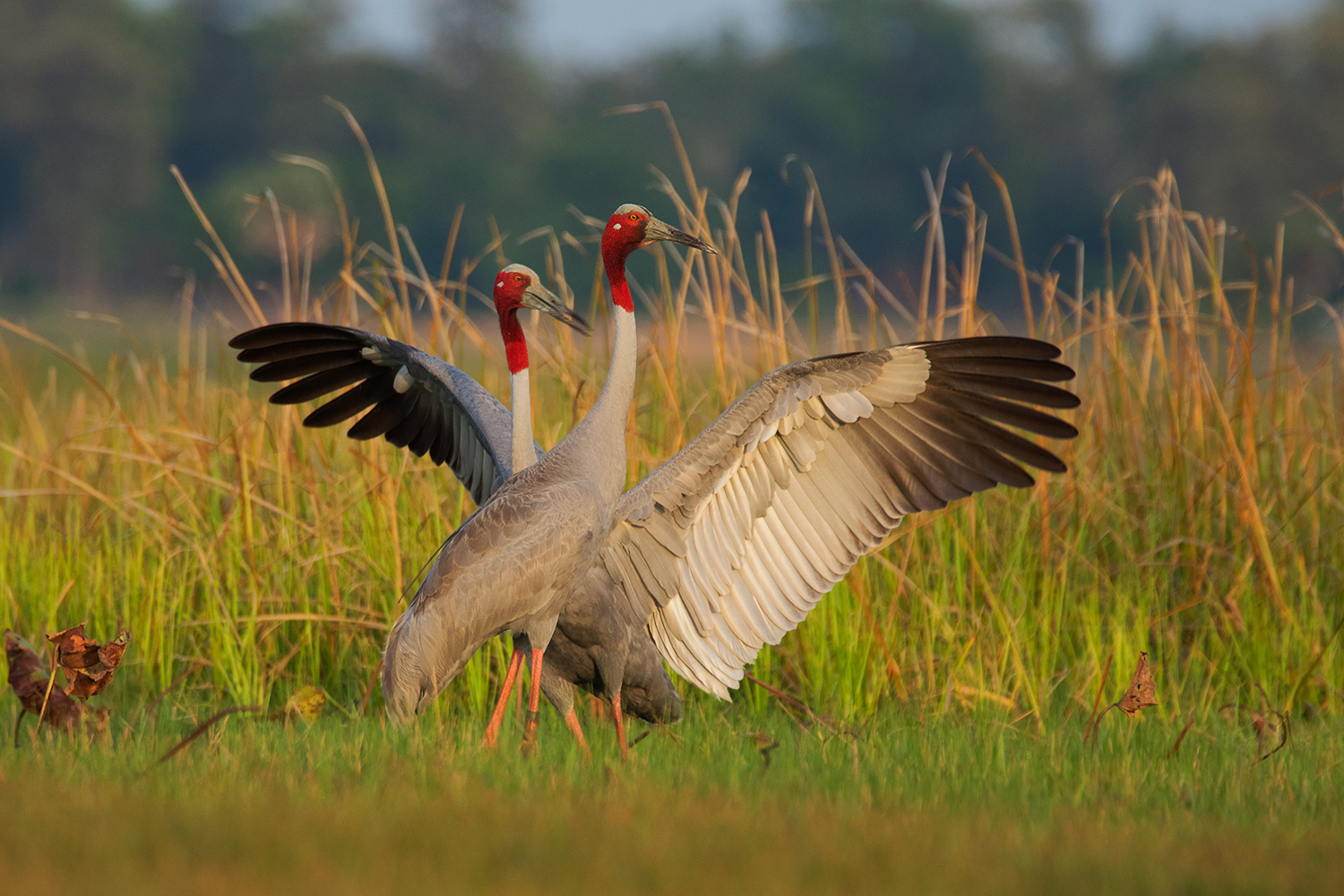 Sarus Crane (Antigone antigone) has three disjunct populations in the Indian subcontinent, South-East Asia (occurs in Myanmar, Laos, Vietnam and Cambodia) and northern Australia. Unlike most of other species of cranes which migrate long distance between breeding and wintering grounds, Sarus Crane are residential or regarded as “short-distant migrant”. The Eastern Sarus Crane population decreased drastically due to water diversions and unsustainable conversion of wetlands, habitat loss, and other threats such as poisoning, human disturbance, collisions with power lines, invasive species and changing agricultural practices. Sarus Crane was extinct in Thailand in 1980s. In the past 10 years, reintroduction programme was established to release the species back to natural habitats in Thailand.

Wet season is the breeding season for Sarus Crane (Antigone antigone) and a busy time for growing rice. Due to success of the reintroduction programme in Buriram by the Zoological Park Organization of Thailand (ZPOT), Sarus Crane has come back from the brink of extinction and started to nest and breed once again in the wild. Since 2011, Sarus Cranes have been reintroduced at two major sites in Buriram. These sites are 1) Sanambin Reservoir, and 2) Huai Chorakhe Mak Reservoir. Since 2016, these reintroduced birds have begun producing offspring annually in the wild.

These majestic waterbirds mostly nest, forage and rear their chicks in rice fields during wet season. Due to their large size, the nest can occupy quite a significant area of rice field, affecting the productivity of the crops. The birds also forage in large area of rice fields, particularly when rearing the chicks. In order to prevent conflicts between the birds and farmers, whose portion of their crops are lost to the nest, (Bird Conservation Society of Thailand (BCST)and ZPOT had jointly established a “Sarus Crane Nest Adoption” project to help accomplish the following objectives:

Please visit the following link to help with the adoption >>https://goo.gl/44i5Ln

Note* Partial support is also welcomed but the supporter will not receive the progress reports. 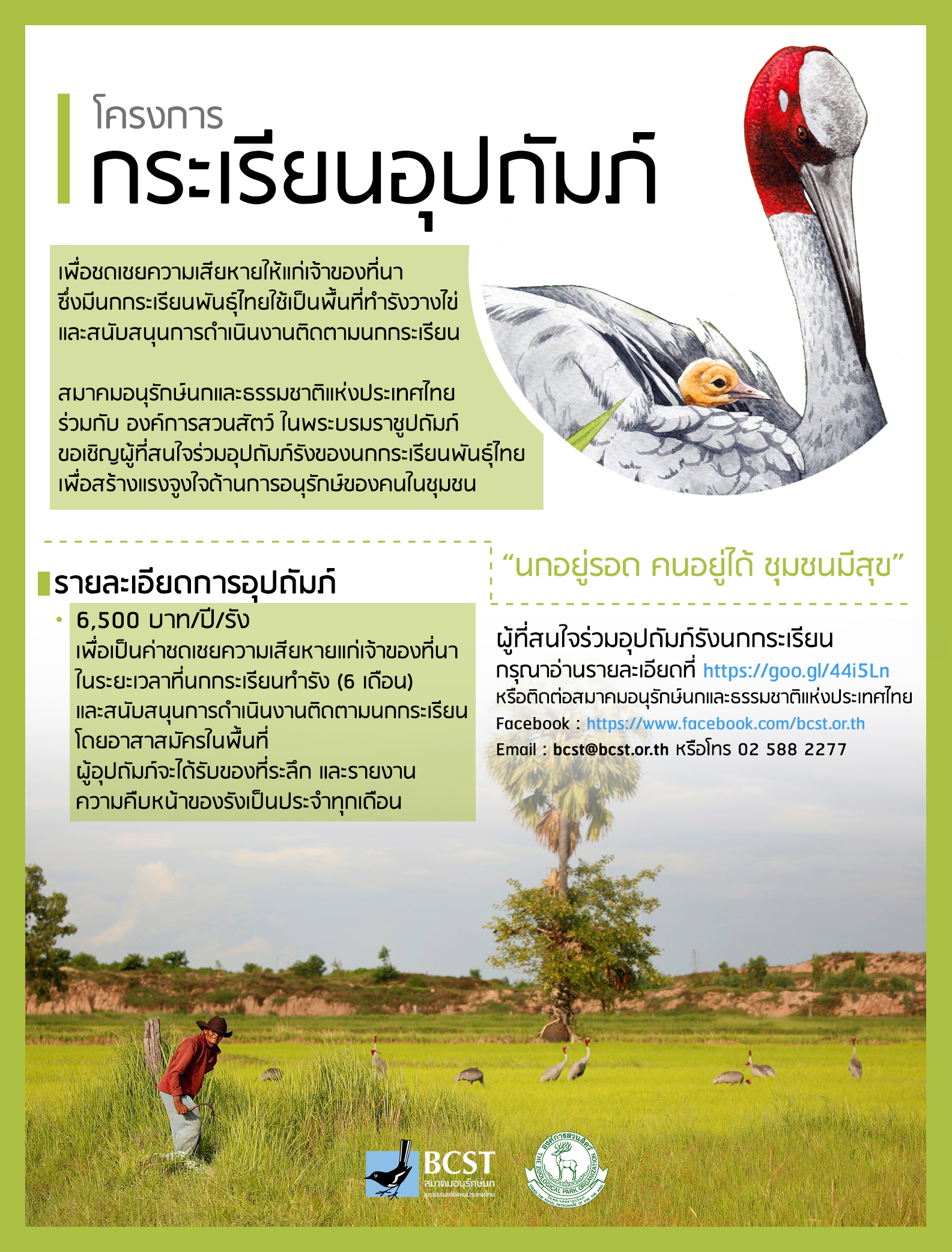 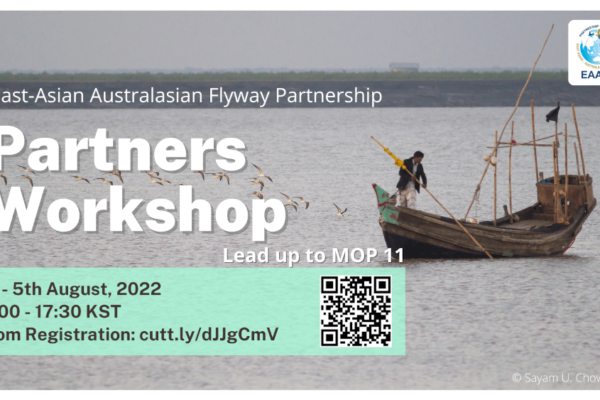