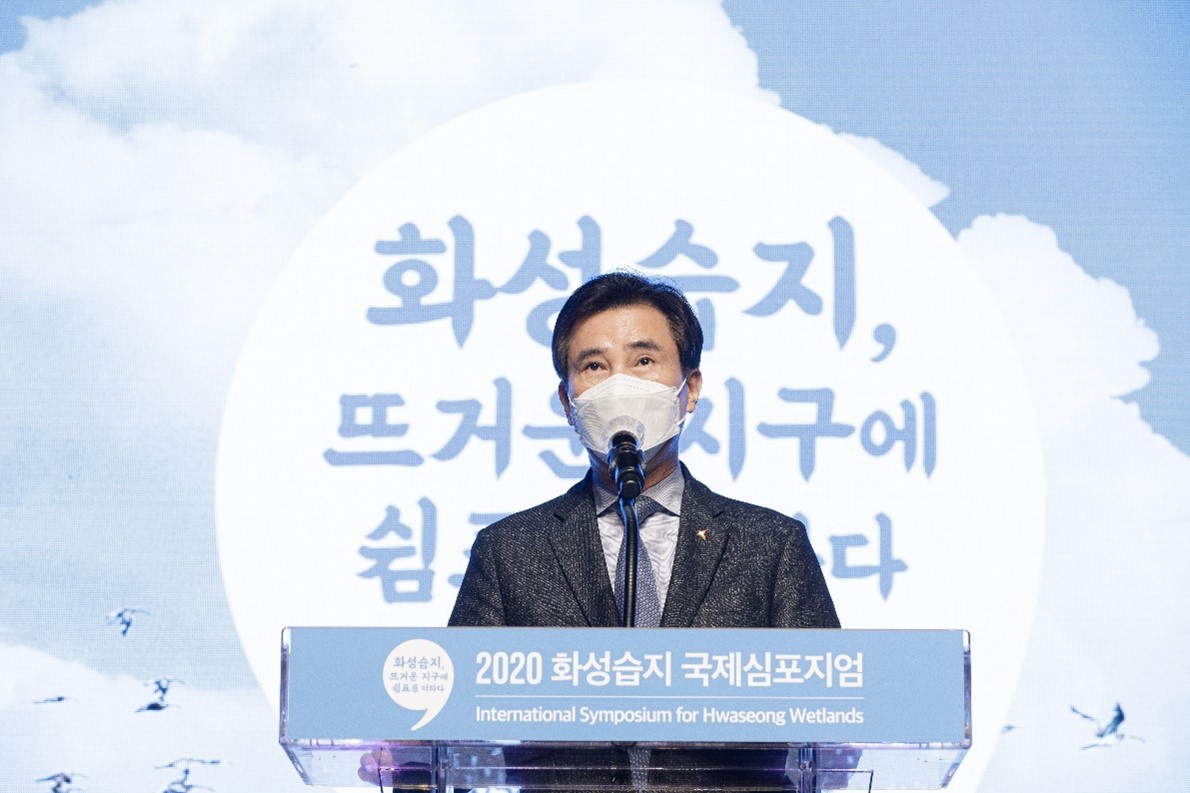 On 1st December, 2020, together with Hwaseong City in Republic of Korea, the EAAFP Secretariat co-hosted the International Symposium for Hwaseong Wetlands to promote the importance and values of Hwaseong Wetlands. Government officers, site managers, national and international experts, and representatives from environmental organizations, NGOs, and local communities participated in the virtual symposium to share their perspectives on Hwaseong Wetlands (Flyway Network Site: EAAF142) and the steps we can take better conserve the site. Birds Korea, Korean Federation for Environmental Movement (KFEM), and KFEM Hwaseong co-organized the event, with sponsorship from the Ministry of Environment, Ministry of Oceans and Fisheries, Cultural Heritage Administration of the Republic of Korea, and Hanns Seidel Foundation.

The symposium began with a welcome speech from Mr. Cheol-mo Seo, the Mayor of Hwaseong City, followed by congratulatory remarks from a diverse group of speakers, including Mr. Doug Watkins, Chief Executive of EAAFP, representatives from the government, civil societies. Mr. Seo stated that Hwaseong City is aiming to designate the Hwaseong Wetlands as a Ramsar site in the upcoming meeting of the Ramsar Convention in 2021 to conserve the site strongly and that they will strengthen policies to put forward a way for citizens to live in harmony with the environment. Mr. Doug Watkins of the EAAFP Secretariat also expressed his genuine appreciation to the participants of the symposium for their commitments and work in protecting the wetlands. Since Hwaseong Wetlands joined the Flyway Site Network in 2018, the EAAFP has made important progress in building relationship with Hwaseong City, including signing a MOU with the city this May.

After the speeches, there was an appointment ceremony of Mr. Do-hyun Yoon, a Korean singer, as the ambassador to the Hwaseong Wetlands. During the following segment of the symposium, Professor Nick Davidson, Chair of the EAAFP Technical Sub-committee and former Deputy Secretary General of the Ramsar Convention on Wetlands, gave a keynote speech on the importance and value of wetlands, highlighting the benefits wetlands provide to people through ecosystem services. 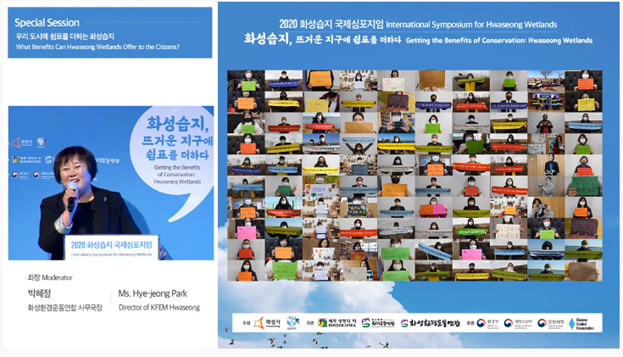 Following the keynote speech, a special session was held, with speakers presenting on the benefits that Hwaseong Wetlands can offer to the citizens. Under the MOU, the EAAFP has worked with Birds Korea and KFEM Hwaseong to implement monthly monitoring surveys, develop the national Far Eastern Curlew network, and organize local activities to enhance community engagement. These activities have helped to foster awareness of the importance of the Hwaseong Wetlands locally and internationally in the EAA Flyway.

Dr. Nial Moores, who has been conducting the ecological survey of Hwaseong Wetlands between June to December 2020, explained the features of the site and its international importance. After the speech, a video of the local activities that KFEM Hwaseong organized was shown, along with messages from 100 Hwaseong citizens. This year, KFEM Hwaseong organized 5 campaigns, 6 meetings, 6 students’ activities, 3 lectures, and 1 forum with local communities. Back to the symposium, we had speakers from a local high school and the fishery communities who participated in these activities also shared their perspectives on the site. Mr. Joon-won Lee of KFEM Hwaseong shared the different opinions of the Hwaseong citizens, including recommendations for how to restore the wetlands’ ecosystems. The special session showcased the Hwaseong community’s active engagement in protecting the Hwaseong Wetlands and the diverse perspectives of the local community. 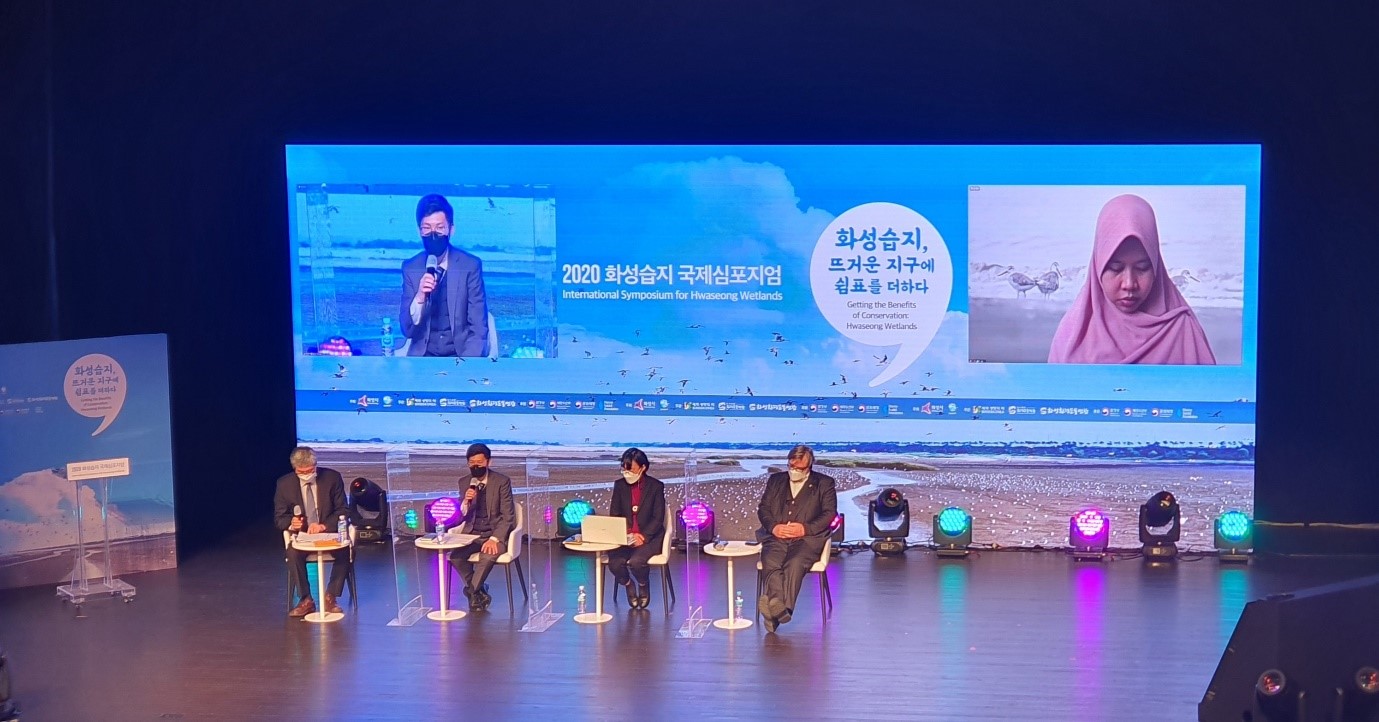 During Session I of the symposium, national and international experts presented on the benefits people can gain from the conservation of Hwaseong Wetlands, with the session moderated by Professor Seoung-soo Chun, the Director of the Eco-Horizon Institute. Speakers explained and answered the audience’s questions on the topics of the Ramsar designation process/ its status, the benefits of the Chungcheongnam-do’s “reverse reclamation” plan, and the benefits of eco-tourism to the local communities. The ongoing reverse reclamation plan of Bunam Lake will improve water quality, restore ecosystem health, and revitalize the area, enhancing opportunities for eco-tourism; similar plans could also be considered for the Hwaseong Wetlands, which has experienced extensive reclamation in the past. Other topics discussed were the benefits of protecting migratory waterbirds to rice-farmers and benefits local communities have gained through the conservation of the Far Eastern Curlew in Indonesia.

Speakers of this session include Mr. Song-hyun Kim from the Ministry of Environment; Mr. Sung-nam Lee from the Maritime Policy Division in Chungcheongnam-do; Ms. Ji-young Jang, Chair of the Regional Marine Protected Area Centres Network; Dr. Taej Mundkur from Wetlands International; and Ms. Ragil S. Rihadini from the EKSAI Foundation. EKSAI Foundation are working on conservation activities for the Far Eastern Curlews in Sumatera, supported by Hwaseong City. Ms. Rihadini stated that since public awareness raising campaigns are the most important factor in changing people’s perceptions and understanding, it will be crucial to convince people of the wetland values to practice sustainable use of the wetlands. Ms. Jang and others also explained that the Ramsar designation and the designation as a Wetland Protected Area will be an important step in conserving the wetlands since they will confer legal protection to the site nationally and internationally, prohibiting land use plans that are harmful to the wetlands. Ms. Jang emphasized that conservation does not have to be at odds with protecting the livelihoods of the community, pointing to eco-tourism as an economically viable way of supporting communities while protecting the site’s biodiversity. 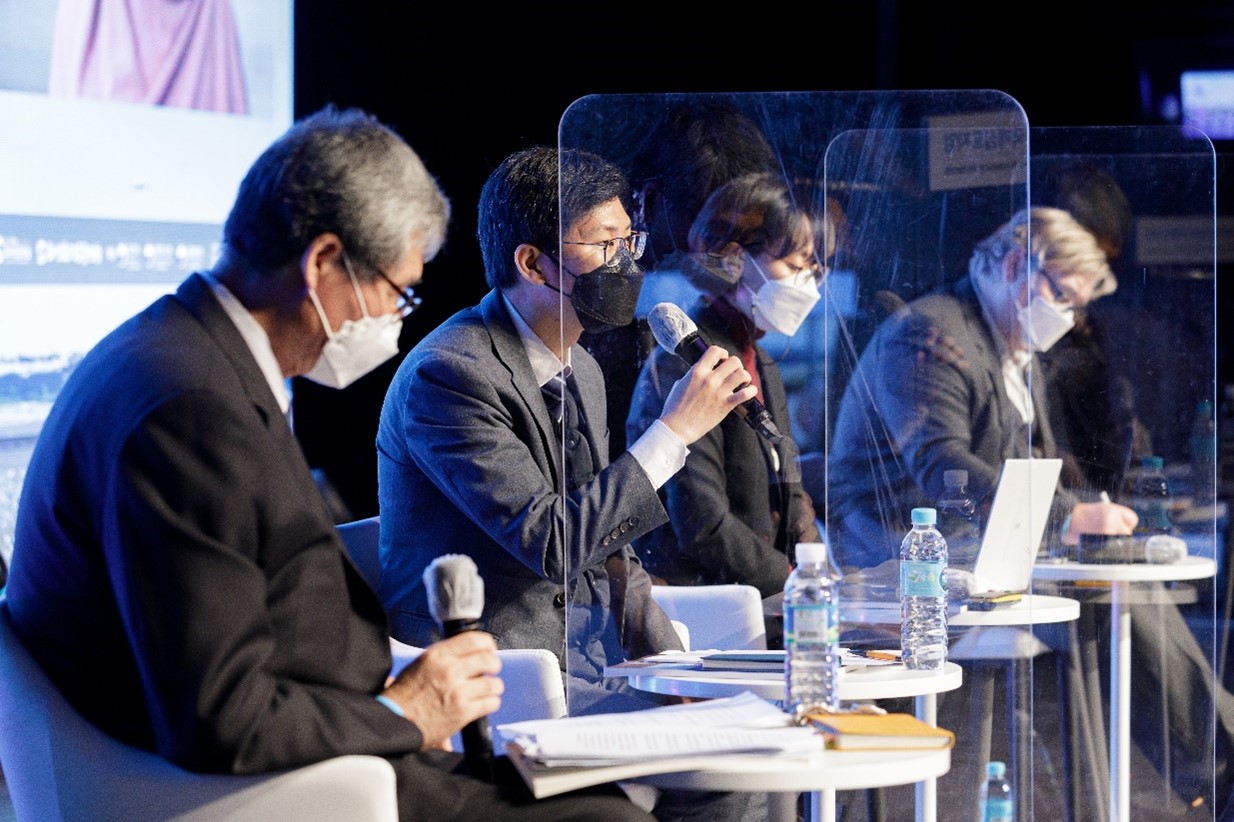 During session II, moderated by Mr. Seok-chan Kang, Chair of the Hwaseong City Environmental Foundation, panelists discussed topics brought up during the symposium to develop the management guidelines of Hwaseong Wetlands for its wise use. Wise use, as defined by the Ramsar Convention, is the maintenance of a wetland’s ecological character in the context of sustainable development. Wise use, therefore, needs to consider the optimal and the most cost-effective ways of conserving and enhancing ecosystem services while also enhancing the livelihoods of local stakeholders. The session served as a valuable platform to identify the six themes based on the three major principles for future discussions to guide the sustainable management of the wetlands. The three principals were suggested by the EAAFP Secretariat: 1) Maintaining and/or enhancing the ecological character of the site; 2) Responding appropriately to interactions between various components of the wetlands; 3) Future management will need to define and to ensure wise use of the land and water of the site. The six themes are 1) Identifying Existing Values of the Site 2) Increasing Participation in Wise Use of the Site 3) Identifying Threats to Site Integrity 4) Enhancing Existing Values and 5) Increasing Understanding of the Values of the Site 6) Increasing Benefits of Local Stakeholders through Wise Use.

Mr. Wan-Seop Song, Deputy Director of the Ministry of Oceans and Fisheries; Dr. Kang-won Choi from the Korea Rural Community Corporation; Dr. Choong-ki Kim, Research Fellow of the Korea Environment Institute; Ms. Hye-jeong Park, Director of KFEM Hwaseong, Mr. Jin-cheul Choi, Chair of the Council for Hwaseong Lake Development; Mr. Yong-jung Ahn, Director of Organic Farmers Korea; and Dr. Nial Moores, Director of Birds Korea all participated in the discussion as panelists. Many of the panelists stressed the importance of establishing a cooperative body to deliver clear, science-based information about the wetlands to the public and other governmental officers. Currently, pressures of industry expansion are the most serious threat to the wetlands and spreading awareness of wetland values and the wise use of wetlands to community members will be integral in warding off threats of destructive development.

The symposium concluded with a signing ceremony of the Far Eastern Curlew Network of Korean Peninsula by the mayors of the Hwaseong City, Yeonsu District of Incheon Metropolitan City, and the Seocheon County, who all relayed the message that there needs to be sustained commitment and collaboration to conserve migratory waterbirds such as the Far Eastern Curlew.  The FEC Network signing ceremony was also one of the achievements of the activities under the Hwaseong Wetlands Project.  The Far Eastern Curlew, a flagship species of Hwaseong City, is among the threatened wildlife species that will disappear if we do not take action to address threats of their decline. Far Easter Curlews, with a small population of 30,000 individuals worldwide, visit the Incheon Songdo Tidal Flats, Seocheon Geumgang River Estuary, and the Hwaseong Wetlands every year, relying on these habitats for their long migratory journey. Through the formation of the FEC Network, the three mayors expressed their commitment to protecting the endangered waterbird species. Concluding the symposium, Mr. Yoon-hwan Park from the Hwaseong Environmental Office and Mr. Doug Watkins gave closing remarks, expressing their thoughts on the symposium and the lessons we can take away from the event.

The recording of the symposium in English and Korean, the program booklet, and the Flickr album can be viewed in the links below: