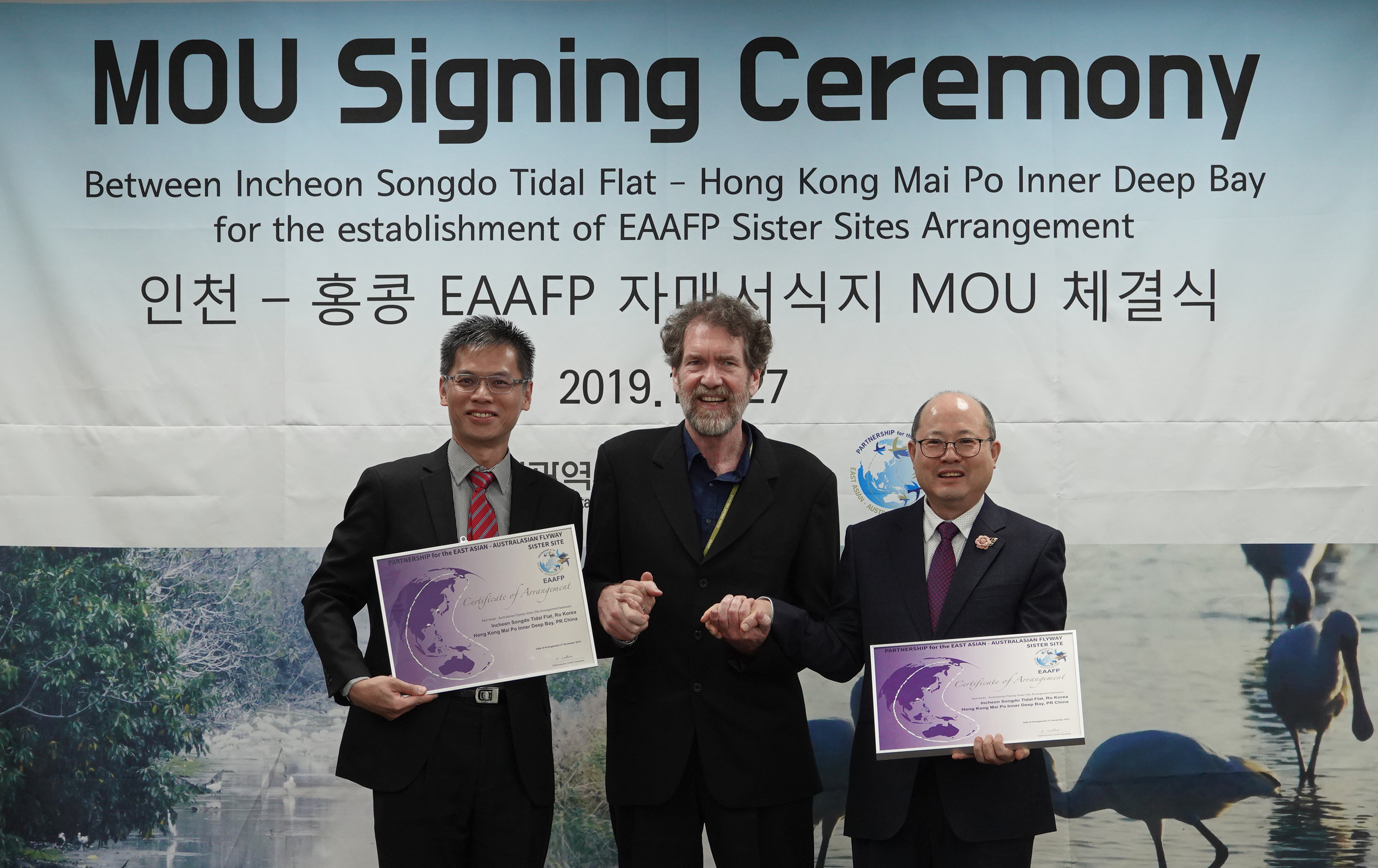 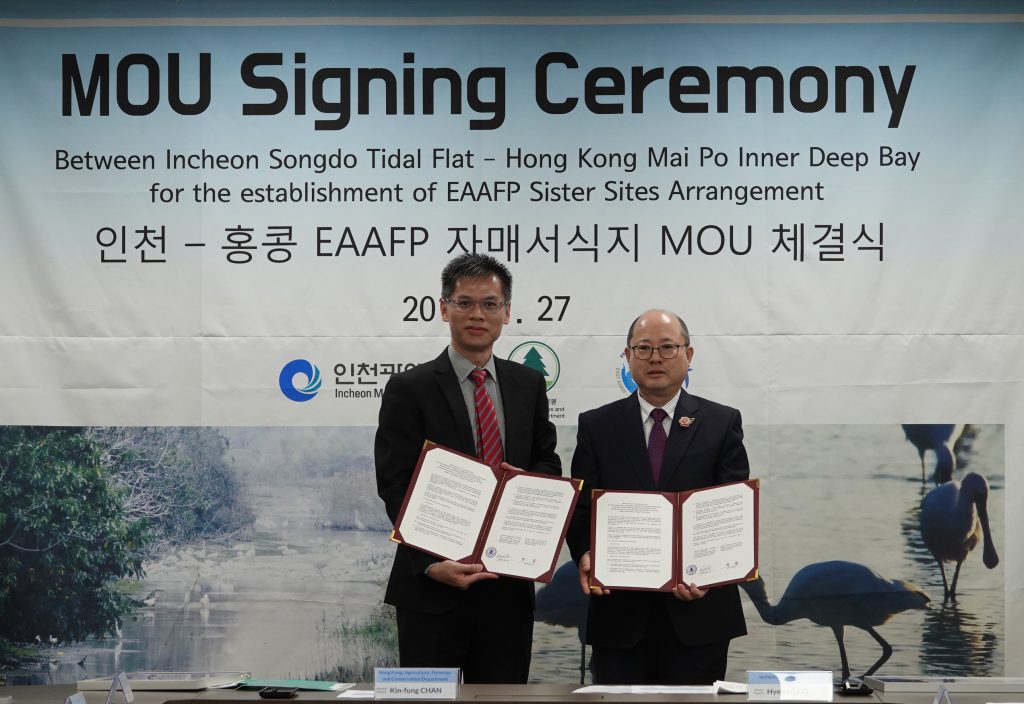 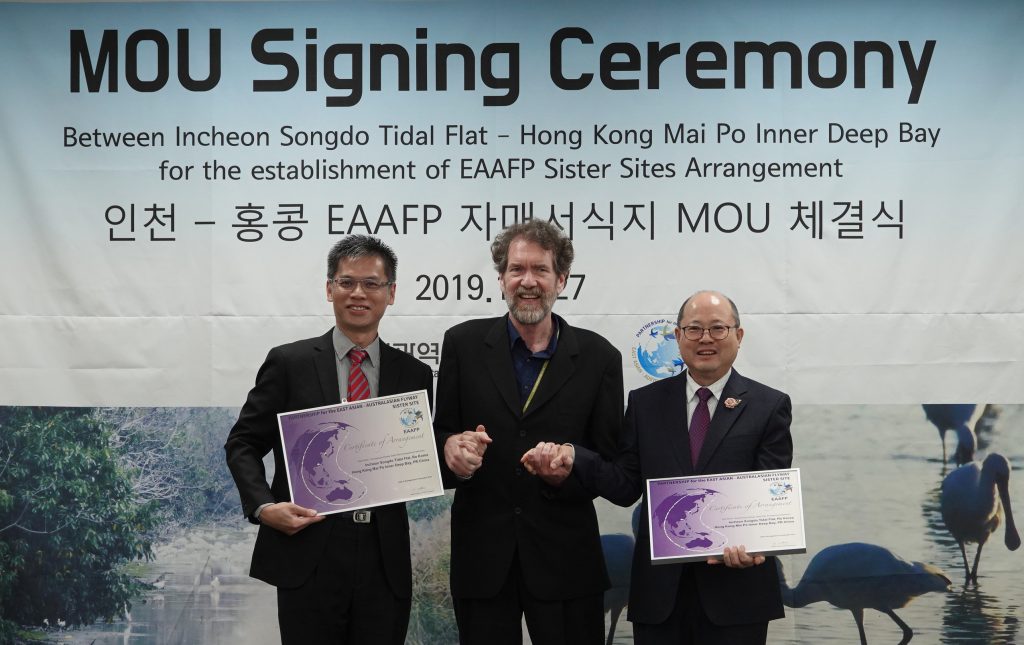 The Sister Site Agreement linking Songdo Tidal Flat (Incheon Metropolitan City) and Mai Po – Inner Deep Bay (Hong Kong SAR) signed today marks the importance of conserving urban wetlands, as these link sites supporting migratory waterbirds such as Black-faced Spoonbill, between Incheon and Hong Kong. After the signing ceremony of the Sister Site Agreement, a meeting was held to develop a cooperation plan. Relevant stakeholders including representatives from local NGO and researchers also attended the meeting and raised their opinions. On 28th November 2019, a conference on the Songdo Waterfowl Wetland Development will be held to discuss challenges and ways of managing urban wetlands with participants including EAAFP Partners from Wildfowl and Wetlands Trust WWF- Hong Kong, EAAFP Black-faced Spoonbill Working Group, and local experts and stakeholders.

During the Opening and MoU signing ceremony, Mr. Baig Hyeon, Director General, Environmental Department of Incheon Metropolitan City government expressed ”Taking today’s Sister Site Ceremony as an opportunity, we hope to see Incheon and HongKong collaboratively putting efforts into conservation in migratory waterbirds like Black-faced Spoonbill”. He also added, “The youth natural environment education programme will be the most critical feature in this case. A regularly held youth forum on the protection of Black-faced Spoonbill will be an essential environmental education Programme for the future generation”. 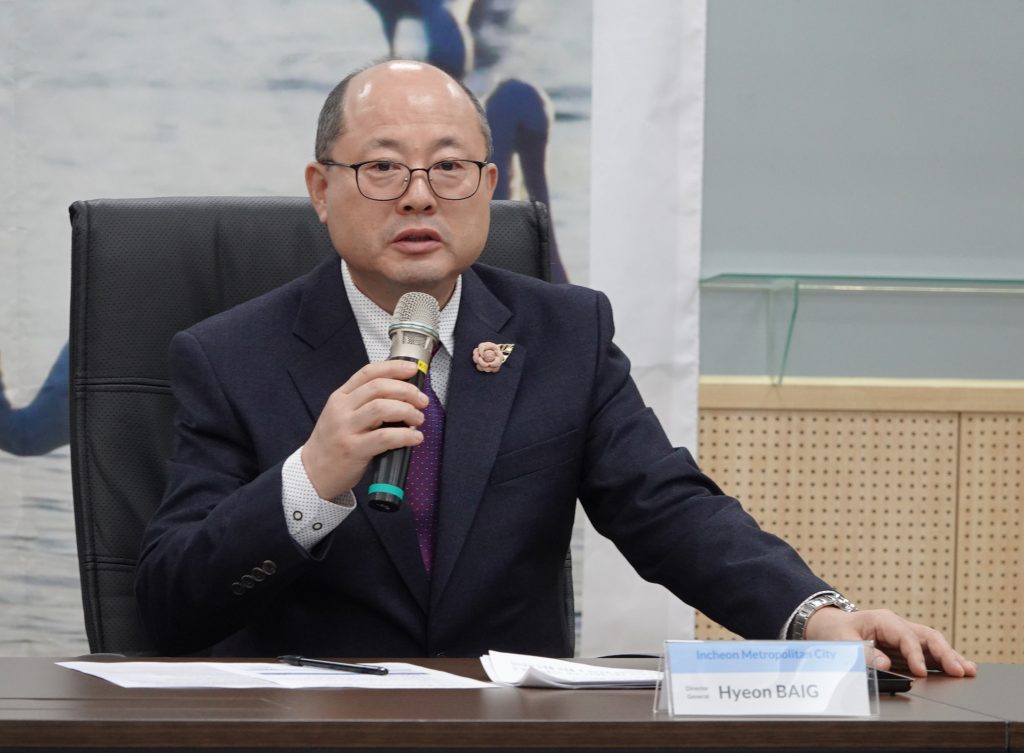 “Joining hands with our local and overseas counterparts is fundamental towards realizing conservation goals. The signing of the MoU will strengthen collaboration and exchange between the management authorities as well as their partnering NGOs and researchers of the two important coastal wetlands along one of the major migratory routes for waterbirds “, Mr. Chan Kin Fung, Assistant Director from the Agriculture, Fisheries and Conservation Department of Hong Kong, said in his greeting remarks. 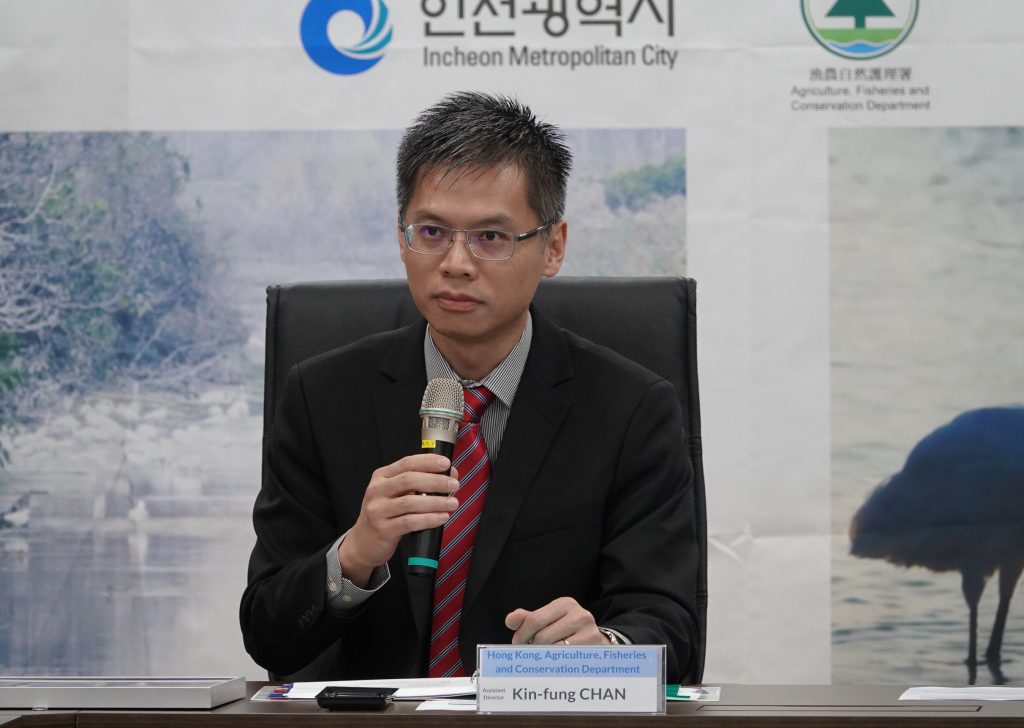 Mai Po – Inner Deep Bay wetlands have been designated as a Ramsar Site since 1995. It is a key stop-over and wintering site for 100,000 birds annually. It became an EAAFP Flyway Network Site (EAAF 003) in 1996. The site is one of the largest wintering sites of the Endangered Black-faced Spoonbill. Mai Po Nature Reserve has been managed by WWF – Hong Kong since 1983. It is one of the most well-known best practices of wetland management in the region.

The Songdo Tidal Flat was listed as a Ramsar Site in 2014 and became an EAAFP Flyway Network Site (EAAF 145) in 2019. The site is under the management by Incheon Metropolitan City and Ministry of Oceans and Fisheries of Incheon City. The site is adjacent to the Songdo Development Area. The tidalflats are a important stop-over and wintering site for shorebirds, especially as a breeding site for Black-faced Spoonbill. Incheon Metropolitan City is now planning for creating wetland habitats for migratory waterbirds as well as offering opportunities for awareness raising and education.

The EAAFP Flyway Site Network was established to ensure a network of internationally important sites are sustainably managed to support the long-term survival of migratory waterbirds within the EAAF. There are currently 145 Flyway Network Sites. The EAAFP Sister Site Programme offers a mechanism and opportunities for Flyway Network Sites in different countries to share and exchange information and experience, to conduct joint activities for awareness-raising, capacity building, monitoring and long-term cooperation.