2018: a successful year for Baer’s Pochard breeding in China 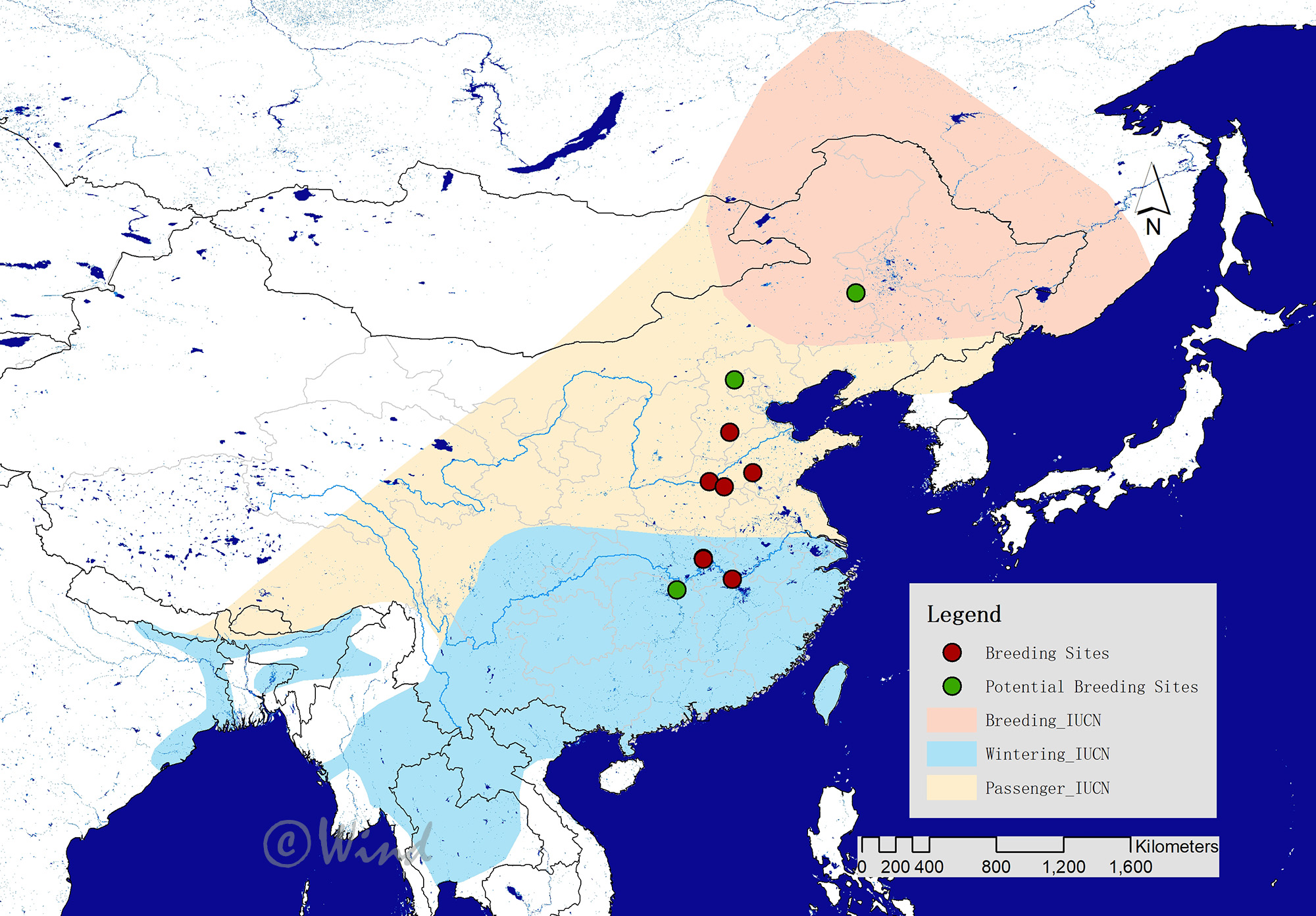 The population of Baer’s Pochard has rapidly declined in the past 20 years and assessment as Critically Endangered by IUCN. There has been no confirmed breeding of this endangered diving duck in its historical breeding area (northeast China and east Russia) since the 1990s. However, in recent years, new breeding sites have been discovered by researchers and birdwatchers outside the traditional range, and there has been successful breeding in each year since monitoring began in 2014.

Breeding situation in 2018
2018 was the fifth year that we have monitored Baer’s Pochard breeding in China. It has been a good year with successful breeding at all the sites we have been monitoring. Below, we summarise the breeding situation from north to south (Fig. 1):

1. Hengshuihu NNR, Hengshui, Hebei province
Conservation Status: National nature reserve. EAAFP site.
Detail: Hengshuihu NNR has recorded breeding of Baer’s Pochard since 2012. It was the first breeding site to be discovered outside the historical breeding range. Our monitoring has shown that, since 2014, ducklings has been observed every year, with the exception of 2017. This year, 19 one week-old ducklings were recorded on 16th June (LI Feng, in litt. ) and 17 approximately thirty day-old ducklings from two families were recorded in late June. This site also holds breeding Ferruginous Duck (Aythya nyroca) and the peak breeding count for this species was in late June 2016 when 27 families with 142 ducklings were recorded. Hybridization at this site is therefore a risk.

2. Zoucheng, Shandong province (Fig. 2)
Conservation Status: abandoned mining area and fish pool, not under protection.
Detail: Breeding of BP has been recorded at Zoucheng since 2016. Young ducklings appear in late July and congregate in late August. In 2018, a total of 29 ducklings were recorded. Given the inaccessibility of parts of this site, it has not been possible to check all the small lakes and ponds, so this figure is a minimum and the real number could be higher.

4. Ancient Yellow River National Wetland Park, Shangqiu, Henan province
Conservation Status: National wetland park.
Detail: Old Yellow River National Wetland Park is 80km from Chenqiao, and could be considered as linked to Chenqiao. This site has recorded breeding BP since 2017 and hosts a large gathering of BPs late in the breeding season. In August 2018, 87 ducklings and 72 adults were recorded during our monitoring. Given this concentration appeared after the BPs left Chenqiao, we consider the BPs in these two places as the same population.

5. Huangpi, Wuhan, Hubei province
Conservation Status: fish pools recently rented by company to build a wetland park, not under protection.
Detail: There have been breeding records of Baer’s Pochard at Huangpi since 2015. In 2018 approximately 30 nests were discovered according to local researchers, however more than half of them were not successful in fledging young. Only one group of seven ducklings has been recorded in late July.

6. Tianhe, Wuhan, Hubei province
Conservation Status: fish pools and small lakes, not under protection.
Detail: There have been breeding records of Baer’s Pochard at Tianhe since 2016. It is only c10km from Huangpi breeding site and the population here could be the same as at Huangpi. In 2018 four groups of ducklings were recorded in late July.

7. Donghu Lake, Jiujiang, Jiangxi province (Fig. 3)
Conservation Status: fish pools and small lakes, monitoring site of Poyang national nature reseve.
Detail: There have been breeding records of Baer’s Pochard at Jiujiang since 2014. It is the first breeding site to be discovered along the Yangtze River, over 1700 km from the historical breeding range. In 2018 four ducklings from two families were recorded in mid-June and late July.

1, Xianghai NNR, Baicheng, Jilin province
Conservation Status: National nature reserve. EAAFP site.
Detail: Traditional Baer’s Pochard breeding ground with c50 nests in the 1980s (LI Lianshan, in litt.). A few summering adults have been recorded in the last two years but there has been no evidence of breeding. As it is a big nature reserve with much suitable breeding habitat, it is possible Baer’s Pochard still breeds.

2, Yeyahu NNR, Beijing
Conservation Status: National wetland park
Detail: Adult Baer’s Pochards have been recorded in the summers of 2017 and 2018 but no evidence of breeding. With the recent ecological restoration, it could be a future breeding site.

In contrast to winter, Baer’s Pochard has relatively strict habitat requirements on the breeding grounds and is more sensitive to human disturbance. Due to human development, 56% of wetlands in Asia have disappeared between 1970 and 2008 and inland wetlands are disappearing at a faster pace than along the coast. It is important to protect and manage the known breeding sites and to encourage birding activities to look for this species in the wetlands of south China in summer.

Fig. 2  A small group of Baer’s Pochard in its breeding ground (Shandong) 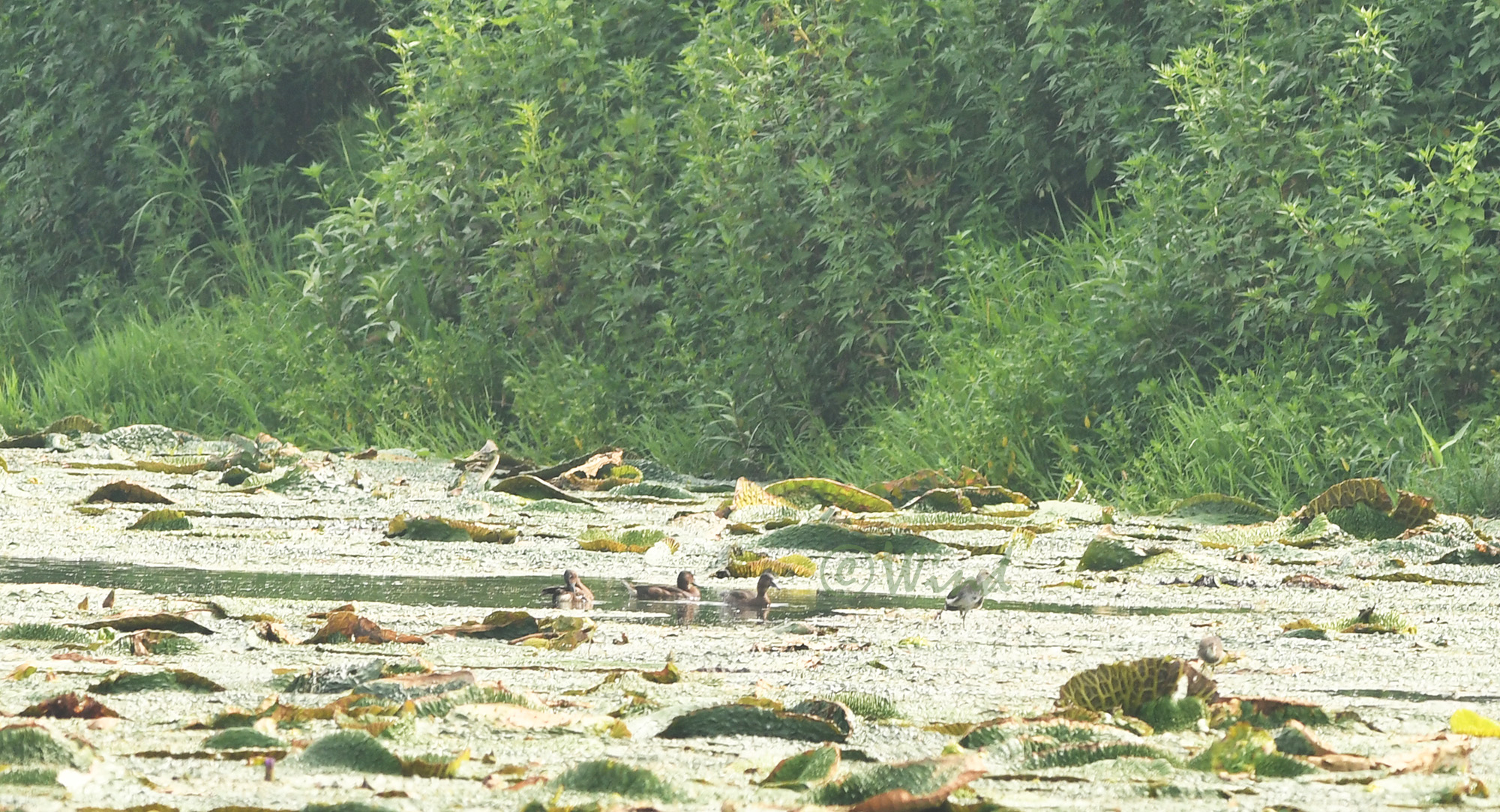