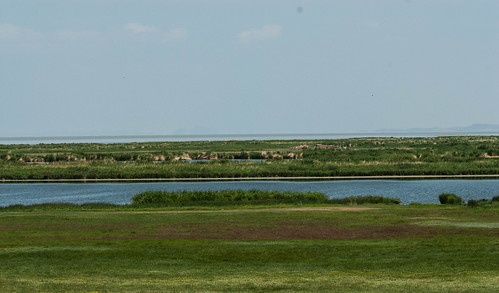 Experts and field biologists of the National University of Mongolia and Mongolian Ornithological Society in collaboration with Ministry of Environment and Tourism, EAAFP and wetland managers of these sites completed and updated the EAAF network sites database in Mongolia in 2015. In 2016, the same team conducted field surveys in 5 different potential network sites and completed the database of the sites. Newly joined sites from Mongolia in EAA Flyway Site Network are Buir Lake [EAAF126], Ganga Lake [EAAF127], Khar-Us Lake [EAAF128], Khyargas-Airag Lakes [EAAF129] and Uvs Lake [EAAF130]. In Mongolia, a total of 11 sites are included in the EAA Flyway Site Network. 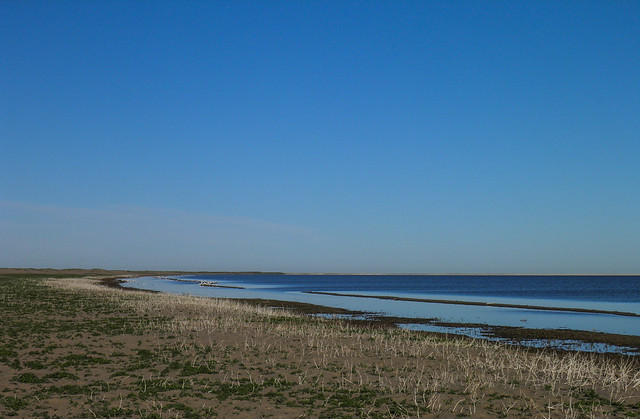 Buir Lake is the largest freshwater lakes in eastern Mongolia at 117,100 hectares and borders with China. Many small lakes and saline ponds are located in the west of the lake. Buir Lake and the surrounding wetlands are important breeding and resting sites of migratory waterbirds. The lake and its vicinity support the flora and fauna of the Daurian Stipa grassy dry steppe. It feeds and regulates the rivers (e.g. Khalkh River) and lakes in its vicinity. The region has major herds of Mongolian Gazelle Procapra gutturosa and 236 bird species, including globally threatened species, such as Swan Goose Anser cygnoides, Common Pochard Aythya ferina and White-naped Crane Antigone vipio. Also, it is an important stop over and refuelling site for globally Near Threatened species (Falcated Duck Mareca falcata, Black-tailed Godwit Limosa limosa and Asian Dowitcher Limnodromus semipalmatus (Gombobaatar et al. 2011)). The wetland regularly supports over 40,000 waterbirds (Batchuluun et al. 2012). Of the 236 species of birds inhabiting the lake and its surrounding area, 199 species are migratory (including breeding visitors), 115 species breeding visitor, 59 species passage migrant, 7 species winter visitor, and 18 species vagrant (Tugarinov, 1932; Piechoki and Bolod 1972; Bold & Eregdendagva 1970; Fomin & Bold 1991; Tseveenmyadag, 1998; Tseveenmyadag & Bold 2000). Buir Lake is also important  for its fish. Overgrazing, illegal fishing, drought and steppe fires are major threats to the birds and their habitats for the site. Every year, on the shores of the lake dead diving ducks, other water birds and small passerines are found entangled with gillnets. The China part of the lake is under particularly high pressure from fish gillnet use. 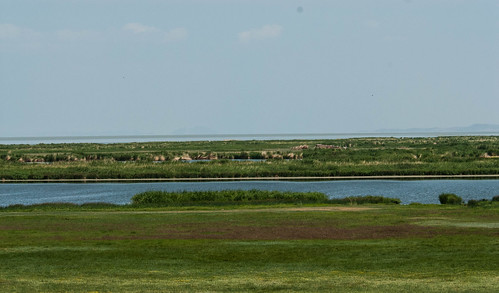 Khar-Us lake wetland was designated as a National Park by the Mongolian government in 1997. The National Park territory covers all wetlands and marshlands of large lakes such as Khar-Us, Khar, and Durgun. The lakes are situated at 20 km to the east of Khovd town which is an administrative centre of the region. Khar-Us lake is a freshwater lake and fed by Khovd, Buyant and Tsenkher rivers. There are over 20 islands and islets in the lake. The lake freezes from November until April. Khar and Durgun Lakes belong to the Khar-Us wetland system surrounded by the Mongol-Altai mountains. Vast reed beds and numerous water plant communities offer diverse habitats for a large number of waterfowl. It is a regular breeding and summering sites for nine regionally and four globally threatened waterbirds. Three endemic fish species occur in the lake. The wetland supports globally threatened species such as Pallas’s Fish Eagle Haliaeetus leucoryphus (VU), Dalmatian Pelican Pelecanus crispus (VU), and Swan Goose (VU), Common Pochard Aythya ferina (VU), White-headed Duck Oxyura leucocephala (EN), and near threatened Falcated Duck (Gombobaatar et al. 2011). About 22,400 water birds use the lake in a single season (Batchuluun et al. 2012). The wetland supports 1% of the flyway population of Great Cormorant Phalacrocorax carbo (3%), Eurasian Spoonbill Platalea leucorodia (2.5%) and Red-crested Pochard Netta rufina (3.5%) (Batchuluun et al. 2012). The area is the only known breeding site for Dalmatian Pelican Pelecanus crispus in Mongolia. Due to hunting pressure for traditional use of its beak, as well as the effects of drought and livestock disturbance, the number of breeding pelicans has been decreasing in the area for the last decade. Among mammals Wild Boar Sus scrofa nigripes is a threatened species in Mongolia and listed in the Mongolian Red Book (1997 and 2013) as rare. This subspecies of Wild Boar only inhabits reedbeds of Khovd River. A total of 40 to 60 individuals of the subspecies were found in the area in 1997. Five fish species endemic to Mongolia are found in the lake system. The area has high social value for tourism, recreation, research, education, water supply, fishing and grazing. An important cultural value of the area is a high variety of different ethnic groups living together. Sacred places (small hills and sacrifice places) and archaeological sites (stone carving and deer stone near Teel river) are found in the area. Small-scale illegal fishing by local people in this protected area has occasionally been recorded. In recent years, local people have been celebrating the “Ice Festival” at the lake in winter. 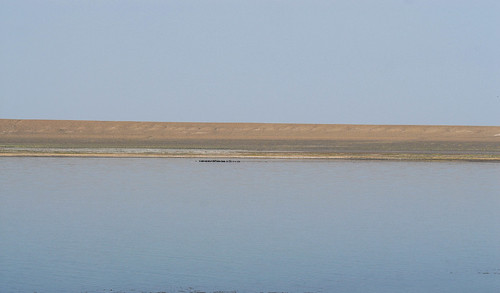 Khyargas and Airag Lakes are located in the desert steppe zone of the Khyargas Lake Depression in the west of Mongolia. These two neighbouring lakes are connected by a deep and wide channel. The site consists of the connecting channel between the lakes, wet meadows of Zavkhan River delta, and the surrounding sparsely vegetated semi-desert landscape. Khyargas-Airag Lake is frozen from mid-November until April. The wetland supports globally Vulnerable species such as Swan Goose, Dalmatian Pelican, Common Pochard and Relict Gull. Also it supports Falcated Duck which is globally Near Threatened (Gombobaatar et al. 2011) and over 30,000 water birds (Batchuluun et al. 2012). The Airag Lake regularly holds 1% of individuals of Great Cormorant (3.9%), Eurasian Spoonbill (6.9%), Whooper Swan (1.4%) and Ruddy Shelduck (1.5%) (Batchuluun et al. 2012). The marshes are dominated by Phragmites communites and floating and submerged vegetation is sparse. Several regionally threatened fish species inhabit the site. Rare mammals, such as Goitered Gazelle Gazella subgutturosa (VU), Mongolian Gazelle Procapra gutturosa and Thick-tailed Pygmy Jerboa Salpingotus crassicauda (DD) occur near this wetland. The area has a high value for tourism, scientific research, water supply and fishing. Primary use of the wetland is for pasture by local herder families. Very small scale fishing activities exist in the lakes.

The Uvs Lake is one of the largest saline lakes in Mongolia and is a unique wetland in the Great Lakes Depression. With its reed beds and freshwater river deltas it provides significant nesting and resting areas for numerous migratory species. The Uvs lake basin is in the Altai-Sayan part of the 200 eco-regions identified by the WWF that should be protected internationally. The Lake Basin has the unique feature of representing all the country’s entire natural zones and geographical belts from wetlands to high mountain glaciers. Also, the basin is one of the largest centers of Euro-Asian biodiversity.  This wetland supports globally and regionally threatened species, Swan Goose, Relict Gull Larus relictus, Falcated Duck and White-headed Duck (Gombobaatar et al. 2011) and over 29,000 water birds (Batchuluun et al. 2012). The wetland holds 0.25% of the global population of the following species in single season: Great Cormorant (5.6%) and Mongolian Gull Larus mongolicus (0.6%) (Batchuluun et al. 2012). The main natural resources of Uvs Lake are mineral water, fish and waterfowl. The area has one of the largest variety of ethnic groups that form a multicultural society in the region. No systematic surveys have been conducted of the wildlife and plants to determine the ecological character of the wetland and its surroundings. Livestock grazing always existed within the wetland. Small scale logging for fuel along the river bank and overgrazing of livestock negatively influence the ecological character of the site. Local nomadic families make hay for winter use of livestock along the Tes and Nariin river valleys in autumn. An increase in livestock number might cause habitat degradation and disturbance to breeding and migrating waterbirds.

Bold, A. and Eregdendagva, D. 1970. Species composition of birds of lake Boyr, Revers Khalhyn-gol and Numrug. Scientific Proceedings of the Institute Biology, Mongolian Academy of Sciences 5:47-57. (In Mongolian)