Waterbird training for the Asian Waterbird Census in Penang, Malaysia 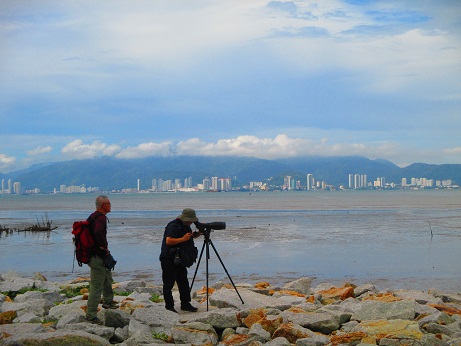 This year’s Asian Waterbird Census (AWC) training was hosted by the MNS Penang Branch on 21-22 January 2017. The training was sponsored by the AWC Funds, Hong Kong. The training was held in the Kampung Benggali village’s community center which is situated in Teluk Air Tawar, an Important Bird and Biodiversity Area (IBA). During low tide, the mudflats extend far out into the sea, the bay is fringed by villages and fragmented coastal wetlands. The idyllic view of the bay with the waterbirds was mesmerising with Penang Island in the background. The first day weather was perfect – cool and cloudy, but with fewer birds compared to the second day which was sunny with blue skies. Twenty MNS members from the northern region attended the short course. The course was conducted by two veteran birders, Mr. Kanda Kumar, from MNS Penang Branch, and Mr. David Li, from the Sungei Buloh Wetland Reserve, Singapore. Mr. Tan Choo Eng, chairman of the MNS Penang Branch helped in organising the event. The course was conducted with field observations and classroom group discussions based on their notes from the field. Meanwhile development is occurring foreshore, along the main road not far from the coast. This is one of the many activities to be carried out to get more local support and to train more counters, raise awareness among the local communities, and involving the locals. The Seberang Perai Town Council were quite receptive about the importance of the IBAs from last years’ event – the Seberang Perai International Conference on Ecotourism and Conservation Efforts” (or SPICEC 2016 website).  You can find the resolution from the conference here.

More photos are available on the EAAFP Flickr album.