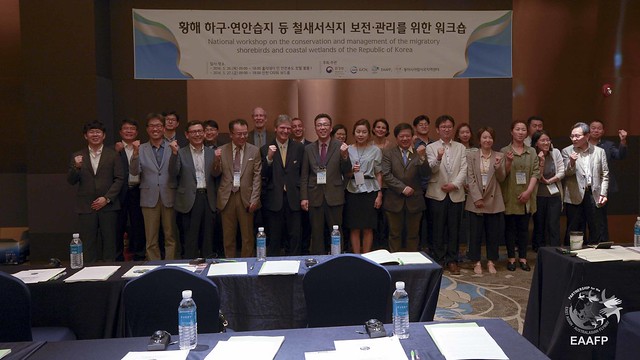 Following the adoption of the Resolutions 28 and 51 on the conservation of the Yellow Sea, its migratory waterbirds and habitats at the IUCN World Conservation Congress in Jeju in September 2012, the Ministry of Environment of the Republic of Korea and IUCN held a national workshop at Incheon on 26-27 May 2016 to review implementation of these resolutions in the Yellow Sea provinces of Korea.

About 60 participants from national and provincial governments, academic institutes and NGOs discussed threats and opportunities to advancing migratory waterbird and habitat conservation, notably of intertidal areas and estuaries, in the country. International perspectives were provided by IUCN, EAAFP and China, the latter having held a similar national workshop in Beijing in 2014.

Participants agreed on a joint outcome document outlining steps forward to be taken in Korea. This document will inform the next World Conservation Congress, to be held in Hawai’i in September 2016.