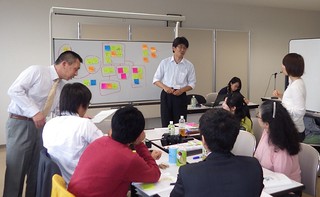 After meeting, experts and officials from the Ministry of the Environment gave lectures on the conservation status of cranes. In Japan, there are 3 crane species which regularly inhabit, Red-crowned Crane, White-naped Crane and Hooded Crane.

Red-crowned Crane inhabits mainly in Hokkaido as resident breeder and its population has grown up more than 1,500 birds, which results from the conservation program by the Ministry of the Environment and the conservation effort of local NGOs. However, the increase of the population size causes several issues such as agricultural damages and high concentration at artificial feeding sites during wintering season. Now the policy phase on Red-crowned Crane is being shifted from the increase of population size to the maintenance of stable population in the natural habitat.

On the other hand, White-naped Crane and Hooded Crane usually migrate to a limited number of sites in Kyushu and Chugoku-Shikoku, the west part of Japan. Especially Izumi City, Kagoshima Prefecture, is the place where over 90% of the world population of Hooded Crane and about 50% of White-naped Crane regularly winter. There are concerns that the highly concentrated populations are likely to have the risk of pandemic of the infectious disease and cause the agricultural damages. The Ministry of the Environment launched the project to promote the dispersion of wintering cranes. It is essential that government bodies, NGOs and citizens work together to solve these issues on cranes.

Taking into account the above situations, participates discussed actively about the issues and solutions in each Flyway Network Site(FNS). For example, with regard to the issues such as the shortage of communications among stakeholders and small-scale development in and around FNS, it was proposed as solutions to strengthen public awareness and introduce a step-by-step experience-based educational program. After hearing this proposal, participants shared each other the educational programs which are implemented in each site. Another issue raised was that the change in vegetation caused by feeding by shika deer might affect the breeding efficiency of Red-crowned Cranes in the near future. Participants concluded the discussion with the proposal that it is important to select the scientifically reliable information and share it among government bodies, wetland centers, local NGOs and citizens.

This meeting enabled site managers to exchange information and experiences directly, and contributed to the enhancement of the network among crane sites through active discussion on issues and solutions of crane conservation. Participants found that other Flyway Network Sites often faces similar issues and sharing experiences would be useful for the management of their own sites.

The Ministry of the Environment plans to hold a National Network Meeting regularly for the site managers of crane sites as well as those of Anatidae sites and shorebirds sites, in order to strengthen national network and support the activities at each FNS.