On Sunday the 24/07/16, another beautiful and sunny Broome Dry season day I participated in the cannon-netting event on the shores of Roebuck Bay [EAAF111] run by Chris Hassell for the Global Flyway Network (GFN) and Australasian Wader Study Group (AWSG).

This was my third cannon netting event since moving to Broome and it always proves be a rewarding experience, and will be one of the things I miss about Broome when I leave here.

In the days prior to the catch the shorebirds had been roosting further west than their regular roosts this dry season and the beach chosen for the catch was “Two Dog Hermit” after some previous tenant of the location and his companions.

This location meant setting the net and cannons in sand which was new for me after the rocky catches that I’ve participated in previously along Wader Beach and I found the sand made setting the nets much easier and leaves a less obvious disturbance on the beach rather than sitting proud on the surface as happens at Wader Beach. This set made it easier for the shorebirds to get comfortable with the new configuration on the beach.

I had to drop a Broome Bird Observatory customer back in town and missed Chris’s customary safety and training speech (with the standard joke of a shorebirds sleepy reaction to being too tightly held no doubt) (yes I admit to that! But it goes down a treat each time! –Ed), and the rest of the pre-firing anticipation among the ranks of the faithful volunteers.

The volunteers are always an interesting bunch, always with some new faces, often mostly well-seasoned cannoneers who take the time out of their precious weekends to come along and participate. The catch offers a fascinating view into the lives of these amazing birds, but also a view into the hobbies and careers of birdwatchers, banders, scientists and laypeople who get involved in these kind of things.

Basically as I see it these events occur for one main reason, policy change. All those hours of planning and assembly by Chris and his team, the hours of banding, sizing and moulting of birds by the punters and then later on the data entry and the spotting of flags and band reading down the track, both here and overseas is for the establishment of policies. It is these newer, better and more relevant policies both in Australia and overseas and based on real world, current data sets which is the only real way we can hope to address the declines we are observing in these species as a result of current weaker policies, and policies which have not yet taken into account what this data is showing us by allowing mudflats to be reclaimed and threats and hazards to persist.

This is why these days are so important and why I encourage anyone with half an interest in the conservation of our extant species to pay attention and get involved in activities like this, they are necessary for the species survival long-term.

As catches go we didn’t catch a lot of birds. There was many of the compulsory dramas with birds of prey, arrogant helicopter pilots and general skittishness and noncompliance from the birds on the beach but the catch ended up going smoothly.

A total of 104 birds were caught, 9 of which were the non-migratory Red-capped Plover, 2 Lesser Sand Plovers, 70 Red-necked Stint and 23 Great Knot, Chris had been focused on the Great Knots when he fired the cannons and there had been many more around the nets but as it happened we only got 23 of them in the catch but it was still a good result at the end of the day.

Personally I slept well afterwards, (I always do after cannon netting), I’m not sure if its exhaustion or knowing the results of our day’s work down on the shore may well be contributing to that ultimate end goal of better protection of our shorebirds globally, perhaps even having the effect halting or shifting some possible new hypothetical South Korean Sea wall or the like from removing the current feeding grounds from our banded Great Knots’ future offspring somewhere down the track.

Good work guys, this is the kind stuff you do in your life, knowingly or ‘Knot’ which really does make a difference in the world.

The Red-necked Stints have been a challenge to age this season in NWA. Red-necked Stints are relatively easy to age as first year birds (supposedly), they almost always just moult the outer 1 to 3 primaries occasionally 4 or 5 and very rarely 6. Some do a complete moult of all 10 primaries in their first year (perhaps!) And these 510 birds are the interesting ones. On the June 19th catch we recaptured 2 Red-necked Stints age 6 and 7. Yesterday we caught one age 5. The 7 year old bird had a trace of BP and slight shadows on the outer primaries. The age 6 bird had no BP and no shadows (or not noted on the data sheet). The 5 year old bird was scrutinised and I said it was 2+ (correct). Later I changed my mind and decided it was an unusual 1st year stint (wrong) that had moulted all of its primaries. There was absolutely no shadows on the primaries and they did look like they had been moulted very recently and also zero BP.

So very unusual to have 3 stints re-trapped that are definitely adults still here in the Bay. To our knowledge all stints go north after just 1 austral winter.

But as I say in my talks on moult we get 95% of the ages correct, the same as Umpires in cricket!

And we don’t have DRS (look it up)

See below for a couple of images. 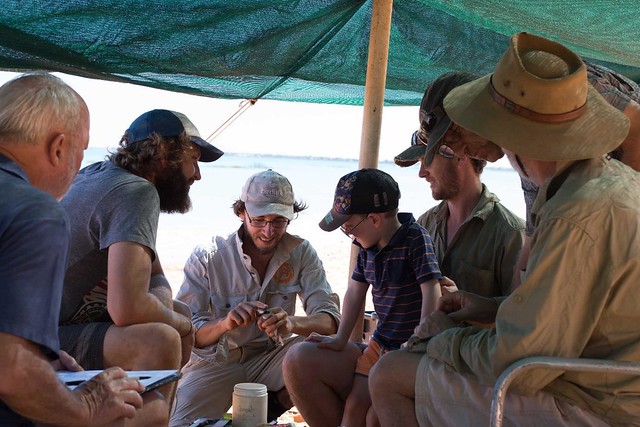 The next generation admiring a Lesser Sand Plover. A. Boyle 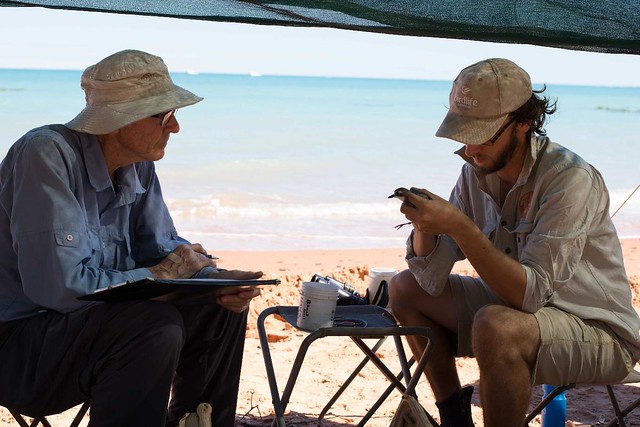 It’s a serious business. A. Boyle