News from the field: Chicks, chicks and more chicks

The team reached their target of collecting 36 eggs and within days, 22 of those eggs hatched! The chicks are doing well and should all be ready for a single release in a few weeks time.

Last time we heard from Roland he reported that the incubator was almost full with 32 eggs but that the team wanted to collect one more clutch, aiming for 36 eggs in total. The next day, the 25 June, Pavel and Egor finally found the nest of Light green 10 and 05 in the moraine hills. That evening Roland and Nikolai visited the nest to assess the eggs and determine incubation stage. Luckily, the age of the embryos fitted in well with the 8 clutches already collected and the eggs of Light green 10 and 05 were collected. So in total, the team collected 36 eggs from nine clutches.

Of the 36 eggs, all were fertile but two failed to develop beyond the very early embryo stage and one egg appeared to be significantly behind the others, i.e. would hatch too late to fit in with a headstarting release, so was returned to a wild nest for parent-rearing.

All of the remaining 33 eggs looked to have strong embryos and were due to hatch within days of each other indicating that a single release (our preferred strategy) would be possible.

After a few days of calm and quiet with 33 eggs safely settled in the incubator, the eggs began to wobble and move as the chicks were stirring inside and getting ready to hatch. On 2 July, all eggs looked close to hatching so were transferred to the ‘hatcher’ (an incubator set-up for hatching with slightly different conditions to the main egg incubator). 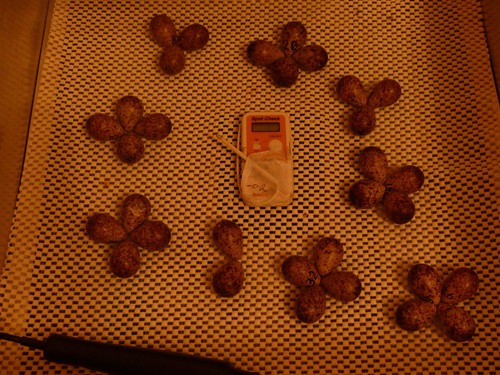 Eggs in hatcher all imminently about to hatch, 2 July 2016. Photo by Roland Digby/WWT.

That evening at 6:40 pm, the first chick hatched and within hours there were three. By 5 July, 22 chicks had hatched leaving 10 eggs still on the way. 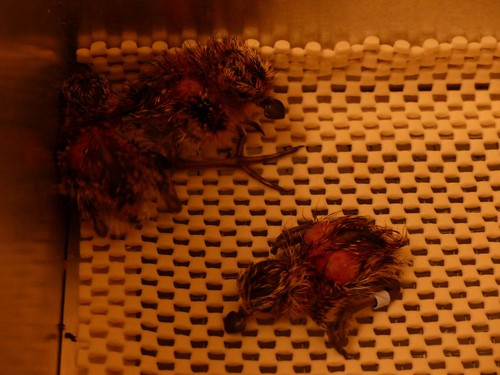 Newly hatched chicks from clutch A on 2 July 2016. Photo by Roland Digby/WWT.

If you’re keeping an eye on the numbers, you might be thinking why not 11 eggs left? Unfortunately, it’s not all good news. One chick appeared to start to hatch too early (approximately 36 hours before it was due based on egg weight and volume) and sadly died about an hour after breaking through its eggshell.

But otherwise, the chicks are doing really well. All the chicks that have been moved out of the brooder (a warm and comfy set-up for new hatchlings) are looking healthy and feeding well.

Roland and the team will now be ridiculously busy caring for the chicks round-the-clock but hopefully we’ll learn the fate of the 10 remaining eggs very soon and get more good news about how the chicks are developing. Blink and it’ll be release day!

Read an original article at: http://www.saving-spoon-billed-sandpiper.com/2016/07/expeditions/news-from-the-field-chicks-chicks-and-more-chicks/