The Kapar Declaration: The Future of Kapar Ash Ponds 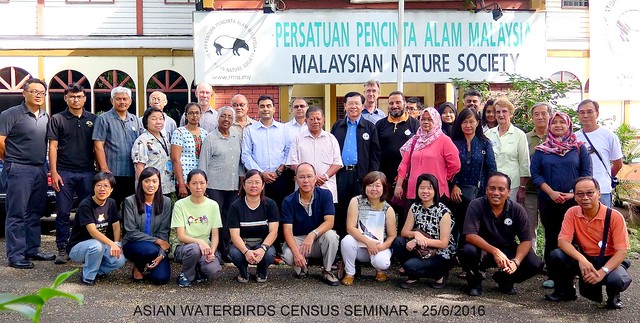 On June 25th, Spike Millington, Chief Executive of the EAAFP, participated in the Asian Waterbird Census Seminar – Charting the Future of Malaysia’s Most Important Migratory Waterbird Roost Site: the Kapar Power Station Ash Ponds,  held at the headquarters of the Malaysian Nature Society in Kuala Lumpur, Malaysia. It was  and brought together different stakeholders to discuss the future of Kapar Power Station Ash Ponds, the most important roosting site for migratory waterbirds in the country.

The very productive day-long meeting resulted in the Kapar Declaration by participants, which will hopefully move forward conservation plans at the site, and ultimately for the North-Central Selangor coast.

The Future of Kapar Ash Ponds

Participants, representatives and experts from the Malaysian Government, institutions of higher learning, corporate, and national and international non-governmental organisations met at the Asian Waterbird Census (Malaysia) Seminar on 25th June 2016 at the Malaysian Nature Society, Kuala Lumpur. The theme of the seminar was ‘Charting the Future of Malaysia’s Most Important Migratory Waterbird Roost Site: the Kapar Power Station Ash Ponds’. The following declaration was made in conjunction with this seminar.

Peninsular Malaysia’s western coastline has long been utilized by migratory waterbirds during their annual autumn and spring migrations. The mudflats and mangrove belt along the more than 100 km long north-central Selangor coast in particular is the most important wintering, staging and feeding site in the country for migratory waterbirds especially shorebirds. The Malaysian Nature Society (MNS) has been regularly monitoring the area since 1987 and has recorded over 50 waterbird species, with an estimated 50,000 to 100,000 individuals using the site each non-breeding season. At least six globally threatened (resident and migratory) waterbird species utilize this intertidal ecosystem. At least one percent of the flyway population of 16 waterbird species is also dependent on this site. Hence, the north-central Selangor coast is a crucial site within the East Asian-Australasian Flyway (EAAF) and is internationally recognized as one of Malaysia’s Important Bird and Biodiversity Areas (IBA).

Within the north-central Selangor coast, the privately-owned Kapar Power Station (or formally the Stesen Janaletrik Sultan Salahuddin Abdul Aziz) ash ponds are intricately linked to the Klang islands which are located about 15 km away. The importance of the ash ponds as a high tide roost for migratory shorebirds was first identified in 1990 after a three year study by Asian Wetlands Bureau (currently known as Wetlands International Malaysia). Migratory shorebirds feeding on the mudflats of the Klang islands during low tides would return to the ash ponds to roost during high tide. As many as 25,000 individuals have been recorded roosting in the ash ponds. To date, no other significant high tide roost has been located along the north-central Selangor coast, hence the need to ensure the future of Kapar Power Station’s ash ponds as a high tide roost site. The lifespan of these ash ponds ultimately depends on the management policy and regime of the power station.

We, the participants of this Seminar, recognize that:

1.1 Malaysia is an important country for migratory waterbirds along the East Asian-Australasian Flyway.

1.3 Within Malaysia, the Selangor coast is the most important wintering and staging site for migratory waterbirds in the country as indicated by past surveys and regular annual monitoring activities.

1.5 In view of the fact that other roost sites along the NCSC have been lost, Kapar Power Station ash ponds are a critically important refuge for wintering and staging migratory waterbirds.

1.6 Many migratory shorebird species and populations are now under threat as a result of coastal development and habitat loss along the EAAF.

1.7 The conservation of the north-central Selangor coast, inclusive of Kapar Power Station ash ponds, urgently needs the support and active participation of all its stakeholders

We, the participants of this Seminar, recommend to:

2.1 PROMOTE the active management of the Kapar ash ponds as a roost site of international importance for migratory waterbirds;

2.2. ENGAGE Tenaga Nasional Berhad (TNB) and other stakeholders in discussions related to the future management of the Kapar ash ponds as a roost site of international importance for migratory waterbirds.

2.3 ENCOURAGE the Ministry of Natural Resources and Environment (MNRE) to nominate the registration of the Kapar Ash Ponds as a Flyway Site under the EAAFP;

2.5 DISSEMINATE the results of the monitoring among government agencies and site management to aid in the management of the ash ponds;

2.6 CONDUCT surveys to update information on current feeding site(s) and any other high tide roost(s) along the north-central Selangor coast;

2.7 Call upon the Federal and State Government to PROTECT key feeding and high tide roost sites along the north-central Selangor coast;

2.8 Call upon MNS and other interested parties to FUTHER DEVELOP communication, education and public awareness (CEPA) activities and materials to highlight the importance of this site to the general public, local communities and government.

Dated this 25th day of June, 2016, by the participants of the Seminar in the MNS Secretariat, Kuala Lumpur.