TRNP regularly supports more than 20,000 seabirds. The 1.1-hectare Bird Islet is the main rookery and breeding ground of six seabird species, four of which are migratory. TRNP is the only known breeding area in Southeast Asia of the worcestri subspecies of Black Noddy, one of the few breeding areas of Sooty Tern and Brown Noddy, and it was the last known breeding area of Masked Booby in the Philippines until 1995. Most of the seabird species breeding at the Tubbataha Reefs can be considered threatened at national or regional levels. The Critically Endangered Christmas Island Frigatebird regularly occurs with up to five individuals at a time, as well as Chinese Egret, Swinhoe’s Storm Petrel, Eurasian Curlew and Black-tailed Godwit. TRNP is owned by the state and is managed under a no-take policy, allowing only tourism for revenue generation and research.

Even though TRNP is far from inhabited areas, there are many threats. Erosion is an ongoing threat to Bird Islet: several large blocks of sandstone with surface soil up to 1 sqm big are eroded by the waves during high tide or during inclement weather. Nearby oil drilling is a potential threat. Marine debris, including plastic food wraps, light bulbs and disposable lighters that originated outside Park is increasingly common and seabirds’ nests are now largely composed of plastic and other non-biodegradable trash from the sea. 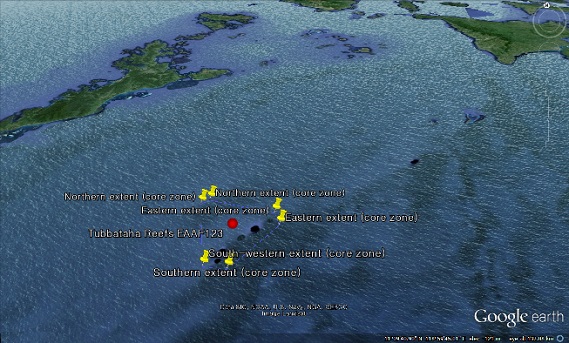