Eaaflyway > News > 2015 Truly is the Year of the Godwit: Ministerial Visit

2015 Truly is the Year of the Godwit: Ministerial Visit 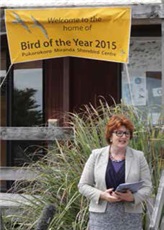 The future of godwits, Red Knots and other migratory birds looks a little more secure following a visit to the Shorebird Centre by Conservation Minister Maggie Barry to formally announce the creation of a huge reserve in the key stopover area of Bohai Bay and to signal the forthcoming signing of an agreement between New Zealand and China on the protection of migratory birds.

In making the announcement Ms Barry paid special tribute to Chinese Ambassador Wang Lutong, who learned of the problems at Bohai Bay, where he comes from, during a visit to Pukorokoro earlier this year.

Following that visit ‘Ambassador Wang has worked with authorities in Hebei Province to gain protection for a significant habitat for Red Knots and shorebirds, covering more than 3000ha, with other extensive wetland sites under consideration,’ the Minister said. ‘The Ambassador is a bird enthusiast who understands the crucial importance of Bohai Bay to conservation and has given generous support to this initiative.’

Ms Barry also confirmed that later this month the Director-General of Conservation Lou Sanson will lead a delegation to Beijing to finalise a Memorandum of Understanding between the two countries to co-operate on the conservation of migratory birds such as the Red Knot and Bar-tailed Godwit. Pukorokoro Miranda Naturalists’ Trust (PMNT) will be represented by Adrian Riegen and the delegation will also include Gary Thompson, the chair of the Ngati Paoa Trust Board, and Fonterra officials in Beijing.

Sanson told the gathering that co-operation between New Zealand and China over the protection of the migratory birds we have in common was at an all-time high thanks to the work of the ambassador.

And Ambassador Wang, whose presence at the ceremony also represented a farewell visit to the Shorebird Centre because his term is about to end, repaid the compliment. With a grin he told Sanson, ‘Pardon me but every time you came to visit me, it was four times I think, you nagged me about Miranda.’

All three speakers paid glowing tributes to PMNT. Ms Barry, for instance, said, ‘The Trust is respected internationally for its success in protecting this important habitat, and the birds which make it their home.’