The IUCN Red List is the world’s most comprehensive information source on the conservation status of plant and animal species. BirdLife is the Red List Authority for birds for the IUCN Red List.

Species with “Least Concern” status are doing relatively well, and don’t need as much conservation attention as threatened species. “Near Threatened” is a species in need of some monitoring as its declines suggest trouble in the future. Threatened categories include Vulnerable, Endangered and Critically Endangered – with the last being closest to extinction. Species that are classified as “Extinct in the Wild” or “(Possibly) Extinct” are the most diminished.

By regularly updating the list we can track the status of the species on a global level to better focus conservation actions. Compared to the previous assessment, in 2015, 40 additional bird species are now classified as having a higher risk of extinction on a global level. Besides the vultures, these include many shorebirds, and other iconic species like Helmeted Hornbill, Swift Parrot, Atlantic Puffin, and European Turtle Dove. Conversely, 23 species of birds have been downlisted to lower threat categories. In some cases, this reflects a better understanding of how they are faring, but some species have undergone remarkable recoveries as a result of conservation action, including Seychelles Warbler and Chatham Petrel. 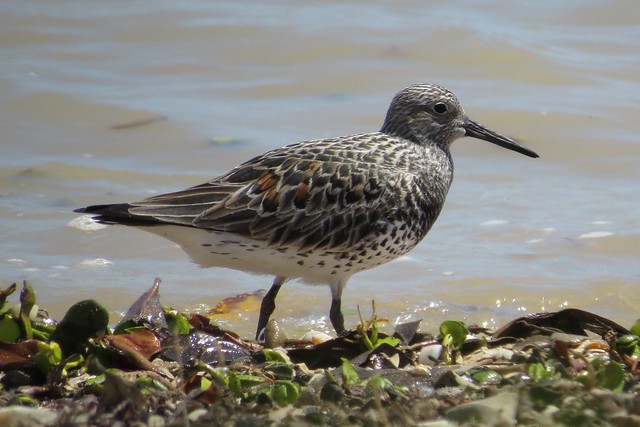 Eight shorebird species have seen their threat status upgraded, including Great Knot Calidris tenuirostris and Far Eastern Curlew Numenius madagascariensis. Both species, which have gone from Vulnerable to Endangered, are endemic to the East Asian-Australasian Flyway and are under intense pressure from the loss of intertidal stopover habitat in the Yellow Sea region of East Asia. Up to 65% of intertidal habitat in the Yellow Sea has been lost over the past 50 years, and the remaining habitat is currently disappearing at a rate of more than 1% annually, owing to reclamation  for agriculture, aquaculture and other development.

Several other more widespread species of shorebird have seen their status raised from Least Concern to Near Threatened. Populations of the Bar-tailed Godwit Limosa lapponica, Red Knot Calidris canutus and Curlew Sandpiper C. ferruginea are declining in East Asia and Australasia for the same reasons as above – but also in some other parts of their large world ranges, from Africa to the Americas. Two other shorebirds, Northern Lapwing Vanellus vanellus and Eurasian Oystercatcher Haematopus ostralegus, have also been uplisted to Near Threatened, owing to factors including the loss of breeding meadow habitat and overharvesting of shellfish, respectively.

The 2015 Red new assessments can be found at http://www.birdlife.org/datazone/species/search.