Seabird mortality events (mostly Common Murres) have been reported since spring 2015 throughout the northern Gulf of Alaska. Below are updates from the U.S. Fish and Wildlife Service (FWS) Migratory Bird Management. 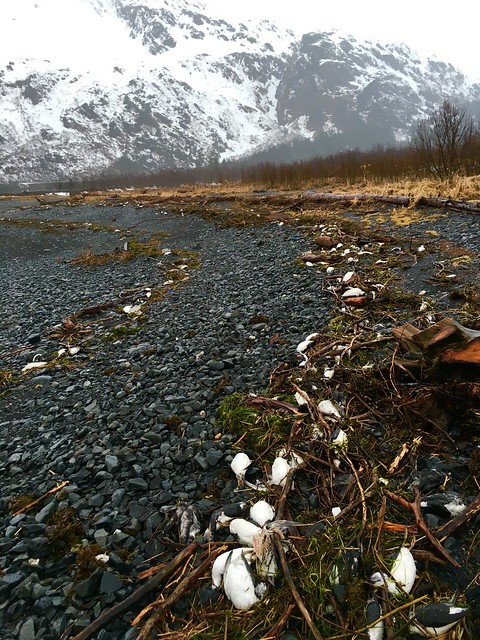 Since spring (31 March 2015), seabird mortality events (mainly Common Murres) have been recorded throughout the northern Gulf of Alaska, including beaches on the Alaska Peninsula, Kodiak, Homer, Kenai Fjords, Seward, Prince William Sound (PWS), and Kayak and Wingham islands (southeast of PWS). Numbers of carcasses on any one beach have ranged from a dozen to several hundred. Region 7 Migratory Bird Management (MBM) has been networking with USFWS offices and Refuges, US Geological Survey (USGS), University of Alaska Fairbanks, Alaska Department of Fish and Game, Alaska SeaLife Center, and the Coastal Observation and Seabird Survey Team (COASST) to monitor beaches and test carcasses for disease or toxins. Coordinating with the USGS National Wildlife Health Center (Madison, WI), to date we have sent 85 carcasses (62 common murres, 23 other species) for necropsies and tests. Nearly all dead birds were emaciated, indicating starvation. Only one Tufted Puffin has tested positive for saxitoxin (associated with paralytic shellfish poisoning).

Beginning 11 November 2015, there has been a significant increase in reports of dead and dying murres from the northern Gulf of Alaska. Stranded live murres have been found on roads and trails many miles inland (Wasilla, Palmer, Talkeetna, Sutton, etc.). Based on information received in the past two weeks, approximately 500 dead murres have been recorded on beaches in the Gulf of Alaska. Additionally, observations of “100s of murres” in PWS are being reported in large floating aggregations (raft of murres) and appear lethargic and exhibit minimal avoidance behavior. At this time we do not have an estimate of total mortality, nor do we have a clear picture of what age groups have been most affected (adults, sub-adults, juveniles).

We anticipate the die-off events to continue into the winter and spring and are developing an aerial beached bird survey protocol to document the geographic extent and duration of this seabird mortality event. With internal and external partners, we hope to conduct beached bird surveys (aerial, boat-based) with some intensive sampling areas to collect demographic data (age, sex) and body condition. Overall, we will use survey data and demographic information to extrapolate an estimate of total mortality and to model the impact to Alaska’s murre populations, and how this might affect future trends. 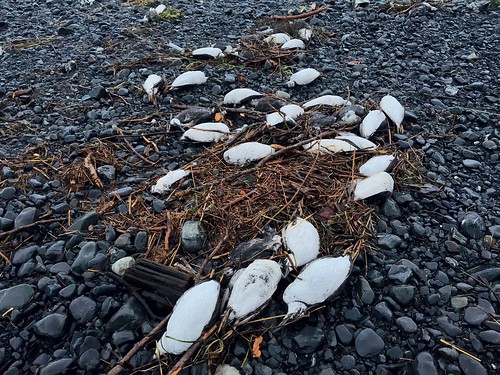 During 27 December 2015 – 2 January 2016, thousands of dead murres were counted on beaches in Seward and Whittier, with hundreds of dead and dying murres reported from inland rivers, ponds, and lakes from southcentral Alaska, as far north as Fairbanks. MBM also responded to >50 reports of dead or dying murres from concerned Alaskans across southcentral Alaska. Working with the Coastal Observation and Seabird Survey Team (COASST), the Alaska Department of Fish and Game (ADFG), the Bird Treatment and Learning Center, and the Alaska State Wildlife Trooper Detachment C, MBM is responding to the public’s concerns. Andrea Medeiros (External Affairs) and Robb Kaler (MBM) provided an interview with an Alaska Dispatch News reporter regarding the number of murres being found inland in the Mat-Su Valley, causes for these unusual sightings, and information on what the public should do.

MBM and U.S. Geological Survey seabird experts believe these seabird mortalities are related to food supply, either due to changes in prey distribution or abundance. Unusually warm ocean waters beginning in 2014 and persisting through this summer and fall continue to break records. Seabird die-offs have occurred during or following previous “El Nino” events in 1993, 1997/1998, and 2004/2005. Because birds may already be in a stressed underweight condition, recent storm events in the Gulf of Alaska resulted in higher than normal mortalities.

Common Murres have been the primary species impacted, and this species is one of the most abundant and widespread in Alaska. Nonetheless, the on-going mortality events since fall of 2014 combined with this recent spike in mortality suggests that the total mortality event will be the most significant on record, with potential for population level impacts.

We continue to collaborate with USFWS offices and Refuges, USGS, University of Alaska Fairbanks, ADFG, and COASST to monitor beaches and test carcasses for disease or toxins. To date, emaciation and starvation have been the cause of death in tested birds.